can somone please check this has 70 AR because unless i'm mistake this is the only caster armor with 70 AR.

it's probably a cut and paste mistake .... for copying the text from the Dervish Norn armor.

If you click on the "Fur Square" links in the Acquisition section, you go to the Tanned Hide Square page. Could someone fix this (I'm not sure how to do it myself)?Crow 11:27, 27 August 2007 (CDT)

thats freaky 0ô ...but i'd also like some "unregular" headpeaces for other classes... —

Sorry to correct you but it would be irregular not unregular. Also, I don't really get this headpiece... does it have a different shape according to what dye you use?? At first I thought it was an Assassin/Ranger mask.. --MagickElf666 18:58, 27 August 2007 (CDT)

Who knew the norns are half scottish braveheart ftw!

In my book, leotards are all-in-one legless, armless, fitted body-type items. I suppose the things I'm referring to above are leggings rather than tights, because they are open toed (and open soled) but do strap underneath the foot. I resisted calling them leggings to differentiate from the GW definition of leggings (which appears to mean most (all?) armor designed for below the waist). -- Karalin (talk) 05:49, 29 August 2007 (CDT) 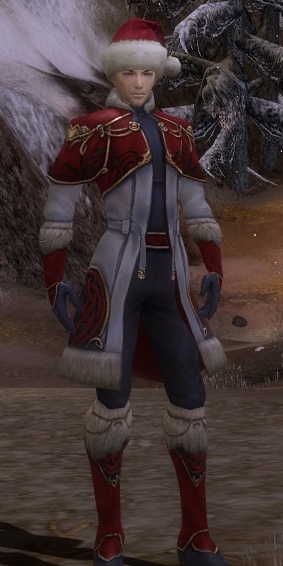 It doesn't have a specific headpiece.--