I tryed to add a black dye to my female ele's fow armor, and this is what happend.

I know u say it turns dark purple, but aint this more black than its purple? - btw got the original pics if u need.

Dyes have been changed in the 1 year diffrence between the comments :)

I better dye it "black" now then, looks awesome imo.

Black dye on FoW makes it purple.. but I worked out a mix![edit source]

This may not give much hope to anyone but the insanely rich, but gray dye + 3 blacks will black dye ele FoW. The gray takes out the purple coloring, but it takes all the blacks to darken it enough to call it black. I'll post a pic when I get a chance to take a screenie, but for now I think I'm the only ele in the game with black-colored FoW ;) Tain 22:27, 30 November 2006 (CST)

If anyone has the cash and time, I'd love to see how it looks with other dye colors, especially red...maybe silver too. Maybe do a ele FoW dye chart. And this is for male. I find that very few armors in guild wiki actually look nicely dyed. All you have to do is dye the chest piece and with the new dye imaging system, you dont have to waste it, just reuse the dye for other combos. Then screen shot each type and use photoshop to mass crop them all. Then just paste everything side by side to form a chart.--— Hyprodimus Prime

The forum thread you linked to above actually reinforces the concept that all the Fissure elementalist sets look the same (it is even explicitly stated as such on page 3 of that thread), which is probably why they're all organized into a single article in this fashion. Are you confusing the 15k sets that you can buy surfaceside with Fissure armor? --Razorfish 04:45, 14 Oct 2005 (EST)

Do elementalists have head piece for Obsidian??? -User:PanSola (talk to the

Could component view be added, please?

If you know anyone with the set, they can add it :) — Skuld

Pls someone add component view! I don't know anyone with this armor, so I can't ask them.

I just separated the pictures into the galleries, to have some form of standard like the other articles. If someone own this armor, please add a separate picture of male and/or female. Right now it's really... stubby ;) -- Stylva 11:01, 8 July 2006 (CDT)

Does anyone have a male ele with FoW with dragon gauntlets too? If so Id like to see how it looks.--— Hyprodimus Prime

Can you take captures out of cities? At cities, resolution is bad, but out of there, all members of the group see the armors with good resolution.

I hit Forgemaster last night for the first time since the release of NF and inscriptions, and saw that you could craft FoW armor with NO built-in mods (it wasn't any cheaper, as is typical with blank armors in Proph/Factions)... does anyone know if that means you can place an inscription on it? 71.98.89.49 13:36, 6 November 2006 (CST)

To answer my own question, yes! I crafted ele FoW tonight, I started with just the blank gloves to see if an inscription would work - sure enough, the Radiant inscription stuck. So I bought the rest blank and inscripted it all... so even without NF, you can get an ele with +energy armor. I don't know if you can change the inscription on FoW crafted with mods, though, does anyone know?

Nice =) But you probably cant change armor with crafted bonuses. Are there any difference in costs for blank obsidian armor? — Stylva 02:10, 13 November 2006 (CST)

Ah, thanks. We should add it then. And get people with other professions there to check for the others, so we can get a confirmation on the materials for them :P — Stylva 00:33, 14 November 2006 (CST)

I checked with a few of my other chars (W, N, Mo), and they all have blank armor. This has the biggest significance for eles, though, since they don't get +energy armor outside of NF.... until now.

Of course they don't need it, its just a fact.. the main point is that with the ability to apply an insignia also means you can CHANGE the insignia. No point in crafting any other kind of FoW. Tain 15:26, 6 December 2006 (CST)

Insignia armor only from Chantry?[edit source]

The newly added note states that insignia-armor can only be bought if you start from Chantry. To me, this seems highly unlikely, but is anyone able to confirm this? — Stylva (talk)(contribs) 12:30, 22 February 2007 (CST)

Imo, simple looks much better. I'm guessing you like Assassin Ancient Armor, lol. Personally, that's way too much to look at, not to mention very impractical. All rit armors have dangly/pointy/floaty/moving things, so the obsidian version should too. For eles, though, I think this fits perfectly. It's all about what appeals to the buyer, though, so good thing wiki is here - if you don't like how it looks, don't buy it. I have it and love it :D Tain 17:51, 26 March 2007 (CDT)
I actually like the ele female armor here, as opposed to the usual 'slutwear' on most ele armor for females. I think this is elegant and classy. 24.58.210.63 22:19, 28 June 2007 (CDT)

I like this armor, even though i don't play elementalist(did, got bored of it, deleted). Though it doesn't seem very elementalist-esque. Kinda more like...a cross between mesmer, necromancer, and elementalist. As for "it's just pixels!", Guess what seeing a chest in real life is, light entering the eye, guess what looking at a screen is, light entering the eye. Source doesn't make a difference when it comes to what it stirs in the subconcious mind, and so saying "it's just pixels, you nerds" is one of the stupidest things you can say. Getting turned on every time you start up Guild Wars is a bit stupid, but saying that anyone who enjoys the look of "pixels" is also quite stupid.--Darksyde Never Again 02:45, 7 August 2007 (CDT)

Not happening... :( I settled for Vabbian. It was something better than nothing. RoseOfKali

I understand its uber-prestige armor, but fucking hell, theres a line between uber-prestige and absolute stupidity, and they've bloody well crossed it. I myself would farm my ass off for this armor on my female ele (slutwear ftl), but 105 ectos is fucking insane!! This = 1 PERFECT Ele Sword

yeah, getting fow armor is really a statement that for you cost is not an issue.

Does anyone have pictures of this with dragon gauntlets?--— Hyprodimus Prime

Is it me or does this armor look like it's made of tire rubber? O_o RoseOfKali

Now that you mention it, it kind of does. Maybe they should make the obsidian plates more shiny so it looks more like obsidian.--— Hyprodimus Prime

Plates? The only obsidian in there is the few spikes here and there. O_O RoseOfKali

I think they're referring to the "base" armor, which looks kinda like platemail, imo. I dunno, maybe drop the ecto cost by a bit, its not SO ridiculous now (since stuff's dropped a LOT since I've been gone). I agree that it is a statement of elitism (or that you have a LOT of time on your hands), but it could do with a small reduction in cost, or at least for this particular set. I'm sorry, but this is the BEST ele armor ever, if for no other reason than its CLASSY, and not ######.

By "plates" I meant the strips of black running across the legs and torso. I think it kinda looks like Nomad

While we are comparing armors, I also think the necromancer Profane armor looks kinda like Master Chief. See

Personally, I think that look exactly the same, except for the fact one of them is male and the other is female (if you get my meaning). Also, one of the only non-revealing ele armor.. shame its so expensive.. —♥May♥Wick♥ 20:06, 19 March 2008 (UTC)

The males have a loose top, the female version is tight. ---

Since when is there censorship in the wiki? That is ####ing stupid. Also, few questions. "Shown with Dark Red dye (Black + Black + Red mix on each piece). No longer possible" If it's no longer possible, shouldn't the images be taken down? Also, under notes, it says "Silve or White dye with a nice clean color"... Since when is CLEAN a color? It's like saying DIRTY color. It's just too generic. --ChristopherRodrigues 20:55, 10 June 2008 (UTC)

I don't understand... where did you see that?

Looks like someone changed some words on several talk pages to ### at some point in the past. No one noticed it until now. We do not censor in that way (unless I repeatedly see something truly offensive popping up in recent changes). Don't worry about it. —♥Jedi♥Rogue♥ 21:02, 10 June 2008 (UTC)

Chris, the note mentioning that the dye color is no longer available is to tell people that yes, it's not available. Taking down the images is not recommended until better images are available, because even though they are outdated, they still show which parts of the armor change color. As far as "clean color" notes, if you don't like them, change them, you're as much of a Wiki user as we are. Don't go swearing on talk pages that you don't like something this minor. RoseOfKali 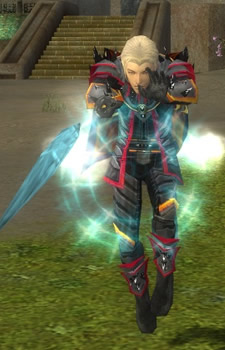 does anyone else see this?[edit source]

the male boots are totally skrewed up! why havnt they fixed this yet??????/

How are they screwed up exactly?

A year and some late to this discussion, but I agree. I was looking over the images before deciding whether or not to get it and the male's boots look incredibly out of place or under-detailed or something, especially when viewing the calves. Everything else on this set has the plates/tire rubber look that everyone either loves or hates but the boots are just flat black and boring except for the footballer shinpads. Ethigenetic 10:13, July 22, 2010 (UTC)