There needs to be a page like the one for Tyria. I came here looking for information on the different areas in Elona (Vabbi, Kourna, Istan, Realm of Torment, etc) and the information is not here. - BeXoR

So, where is this Elonia, besides a single reference in some minor game text? (Which, given ANet's record of spelling errors in minor game text, I absolutely do not take as a meaningful reference.) Is there a reason to call Turai Ossa's settlements in the Crystal Desert anything other than just plain "Elonian settlements in the Crystal Desert"? — 130.58 (talk) 20:29, 22 November 2006 (CST)

It would be more than just a typo if the text was supposed to read "the nation of Elona was no more", since THE nation of Elona persisted. It also makes absolutely no sense that Turai would leave behind the nation of Elona to his son, and establish a new nation with identical name. -User:PanSola (talk to the

Take a map of Tyria and a map of Elona. See how Crystal Desert and north of Elona match. Elona and Tyria are actually one huge continent just like Europe and Asia. Utaku Mu Dan 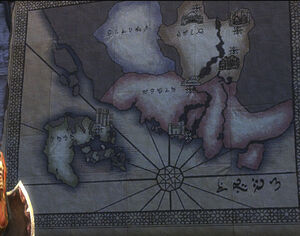 excuse the late answer, but i've just seen that you've also seen (a long time before me) this ingame map. why isn't it mentioned in the article? The Tyria world map in Diessa Lowlands is also shown. --

There should be some mention of the mysterious portal in the Arid Sea (Crystal Desert) which is guarded by a Forgotten, and leads to the Desolation in Elona. Elbereth 17:58, 23 March 2007 (CDT)

Why do they all it the "Land of the Golden Sun"? Shouldn't the color of the sun not depend on which continent you're on? Or for that matter, which planet you're on, so long as it's not so many millions of light years away as to significantly redshift it? Quizzical 00:22, 28 July 2008 (UTC)

(edit conflict) They appearance of the sun is subjective (you want langugae torefer to it objectively, but most people don't have the astronomy knowledge to do that), and it changes the further north you get. So it doesn't depend on continent, but on latitude. --◄mendel► 01:42, 28 July 2008 (UTC)

If the sun rises in the east, then it rises sooner on a given day in areas further east. Japan is quite far east, so that could well be a reference to that. Quizzical 04:14, 28 July 2008 (UTC)

A person from Elona is...[edit source]