I never noticed this skill before...but now I kind of want it more than I've wanted anything in my life before. - Jack

Agreed, like smiting, the new faction skills made Beastmastery a plausible proffession. Whether it would be good, I'm not sure, but dealing +80 damage every 5 seconds sounds pretty great. With a combination of interrupts and poison from bow and raw damage from arrow, I can see a pretty good combination. I plan on testing the idea after I have time. Silk Weaker 05:07, 4 July 2006 (CDT)

Interrupts and poison from a bow would severely limit the damage of the skill. Unless you went without comfort animal and troll unguent, I don't see it all fitting in one build, as this skill takes a few recharging BM skills. -Auron

Who says you need troll unguent? That's why you've got support classes; not every ranger build needs troll unguent.

I do not see how interrupts can limit this skill as it has no casting time? And I grant you you'd have to use it right before this one, but Comfort Animal could be used to recharge for this. Hmm, I have got to try packing Call of Protection and two BM nature rituals with this one: run those before battle, and you have 60 seconds of uninterruptible bonus goodness. ;-)(mendel 84.128.233.245 09:55, 16 May 2008 (UTC))

You can (barely) carry poison:[edit source]

This is because Enranged Lunge counts itself as a recharging skill. In other words, you need a total of six beastmaster skills on your bar: charm animal, comfort, 3 others, and enranged lunge. That leaves room for two others. (This is with high beastmastery.) Or, another trick is to bring Tiger's Fury or its copy, this will cause charm and comfort animal to recharge, triggering the Enranged Lunge bonus.

If you really want poison AND a bonus to EL then bring Poisonous Bite. Silly thumpers, poison is for pets!
To add to the above, above post you could also bring Marauder's Shot to do the same as Tiger's Fury if you have any ranks in Marksmanship.

Since the recent update, i noticed in my pet display bar that when i use this and it shows in my pet's bar, it shows as "+110 damage (maximum bonus 80) per recharging beas mastery skill." So far ive only seen (or even tried for that matter)on this skill, so it adds the damage multiplier before the damage is dealt. in this case, the damage is added to the next attack even if a recharging skill gets done recharging before the next attack. just thought i'd point it out. :-)--24.166.100.250 22:02, 6 April 2007 (CDT)

"Beware - If you are relying mostly on high energy cost Beast Mastery abilities, such as Never Rampage Alone, or even Feral Aggression if your Expertise attribute is at a low, you may have trouble meeting Enraged Lunge's requirements shortly afterwards." Removed; it's not this skill in particular that needs e-management. We might as well stick "do not use too much energy or you will have none" on every non-adrenal skill. - 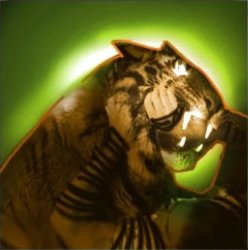 This now is just really nice. It works better than Finish him. At 10 bm it still gives a +37 dmg and dw for 15 seconds. For 5 energy and 5 recharge it is just sweet. No need to worry about disabling skills either. With this, the comfort animal change, and the bug fixes it really is my favorite update this year.

Really it isn't a nerf. It might have lost a few points off damage, but consider that to get that damage before you had to disable skills. That wasn't really an issue for a pure BM build, but for mix builds it was a pain. Now though it has a set damage, and a nice amount, plus Deep Wound. Consider that instead of dw this skill said along the lines of providing +10-42 dmg, reduces targets maximum hp by 100, and target is healed for 20%less. It is a much better skill now. 5e dw spam and nice damage. With the update non bm can take full advantage of it also. Non rangers can combine this + Scavenger Strike for energy management even at 10 bm. If you want to call it a nerf you can, but in my opinion this is far from a nerf.

Then consider this: 4 beastmasters,

Why not, they increase the number of targets, hit points, damage, and had spiking capability. And 7 beast masters, even better xD--LaDoncella 00:09, 9 August 2009 (UTC)

Well, for one condition, I'd say it's a nerf: making a dire pet. Then again, with the Menagerie and Dire being worth the same as Hearty, you can just staple it on a bar, ignore it, and let it level. Never should have made them worth the same --Gimmethegepgun 02:19, 9 August 2009 (UTC)

Something you are forgetting though is bar compression. Before you needed to have skills disabled in order to get all of that bonus damage. So you are inaccurate for the "first hit" damage. You are thinking of using Tiger's Fury to disable skills. The problem there is that it disables skills for 5 seconds, with a 10 second recharge. While Enraged Lunge has a 5 second recharge. So instead of hitting with it every 5 seconds you are hitting with it every 10 seconds. Let's say that both are at 12 bm, you need 4 skills plus EL just to get the max damage. With the current form you will be doing 42 plus dw, and we won't even count dw for now. If you do the max damage of +80 dmg every 10 seconds with the old form, the new form will do 84 dmg every 10 seconds. Though using a combination of other skills you could keep up the +80 dmg every 5 seconds. You would need Marauder's Shot. So now you have 6 skills devoted to one. With that setup you can do +80 dmg every 5 seconds for a nice bit of dps. The new ER doesn't require so many skills devoted to it. Instead all you need is ER, and Comfort Animal. This allows for a much wider array of skills to be used. Also the Deep Wound has great synergy with other bm skills. The new version taken by itself does more dps. If you want to calculate new dps then take a build like above . You can toss in Call of Haste,Call of Protection, Tiger's Fury, Comfort Animal, Enraged Lunge, Marauder's Shot and two optional skills. That will maintain some pretty high dps at 12 bm. Compare that to an axe build with an 11 10 10 split. Using axe attacks, plus a few bm skills, flail, you can get a sustained dps of 86+. I tested while writing this and got as high as 101, but my average was usually around 85 to 90. So while the skill may not put out as much damage, it is the ability to combine this skill with others more freely, that makes it more powerful.

I think you are missing the point. You don't need to disable the skills, they just need to be recharging (check yourself Enraged Lunge (PvP)). Just play as a pet master and devote your build to your pet with proper skills. check this build:

note: look at the PVP versions because its how the skills where before the update
2nd skill, keeps the pet alive. 3rd heals yourself and outheals the damage you might receive from Symbiotic bond. 4th nearly doubled the dps of a dire pet before the overall pet buf in the update. All of those have long duration and long recharge. Just use them when they are ready to use. 5,6 were the normal for a pet master, now you would only need comfort.
Anyway, with that build at 12bm you are doing 74*2=148 per 10 secons with Enraged alone --LaDoncella 22:51, 9 August 2009 (UTC)