I am starting to question my own statement. I am pretty sure I used to knock them down with my warrior (like 4 months ago). I have been going through the game with my monk and meeting these guys and have had no success knocking them down with Bane Signet. The catch though is that Bane Signet is not a straight knockdown skill so it could be that I was just unlucky and that each time I used it the Ettin was healing or moving and not necessarily attacking. Can anyone confirm they can knock them down these days? --Karlos 19:26, 14 November 2005 (UTC)

Funny you mention that, I changed Gypsie Ettin just before guildwiki went down to state they use Balanced Stance because I was knocking them down and they would counter it with the stance.--Chuiu 17:26, 15 November 2005 (UTC) 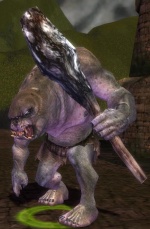 When I first read it I was wondering too, because I had never noticed. But then I found this image which shows the two faces even nicer than the image on GuildWiki.
Perhaps two faces fits better as a description than two heads. They seem to have 1 head with 3 eyes and 2 linked mouthes. --Tetris L 12:24, 15 November 2005 (UTC)

Been a while since someone commented here, but if you think of it, there's a total of 3 heads.