Eve is my favourite NPC in the entire series, she has the best story and yet they seem to have left her out of the game pretty much.. she needs MORE quests!!! when I saw the Bleached Skull focus, I thought yes! finally Eve can have a skull.. but nope.. wrong type.. oh well maybe someday, get on it developers!! --Jamie 09:50, 12 May 2006 (CDT)

Anyone noticed that Eve's pet skull is called Adam? Thanks to my bro for noticing that one Skuld

I was refering to eden Skuld

Oh sure, a "star" henchman like Cynn will take every opportunity to parade her insipid ire and tabloid romance across the screen in a torrent of dialogue pop-ups. Meanwhile Eve, the face of Guild Wars, remains off-camera, quietly Blood Ritualing your monks until she dies. --clubs 10:36, 26 November 2006 (CST)

Hmm.. Like Cynn and the hidden panty texture, Eve's got somethin goin' on as well. —The preceding unsigned comment was added by Rickyzhou (contribs) .

You might want to put new discussions in new sections at the bottom of the page. Tip: You sign using ~~~~. It's nicely explained on the notes below the "save page" button. --Ab.Er.Rant

I thought this was changed recently, because when I played my characters through Kryta months ago I never saw her. However, checking the article history shows that piece of info exist last August when the article was created. I have no way of telling if Anet added her to the Ascalon Settlement in the past few months, but I'm pretty sure she wasn't there last August.

Does anyone have a character capable of checking this info? -User:PanSola (talk to the

Well she isn't in the quest at the beginning that's for sure:

I just did the Ascalon Settlement quest and searched the whole settlement for her, but she's nowhere to be seen. So I'd suggest to delete that line. --Parabellum 12:31, 5 June 2006 (CDT)

What Armour is Eve wearing? does anyone know? And if so is it able to be worn by players?

Most end-game henchmen, anyway. Only Eve, Devona, Aidan, Mhenlo, Cynn, and Thom have unique armour. The rest are all wearing Tyrian Armor. Though this is different in Factions. --Valentein 13:21, 26 September 2006 (CDT)

Ok, how can you figure out her soul reaping attribute level? She doen't have any reaping skills, you can't see the gain for other players, and figuring it out from the energy she spends would be very unreliable at best. And yet several people contributed to that part of the article... 134.130.4.46 04:16, 7 October 2006 (CDT)

Because energy gain from reaping is desplayed for everyone when something dies. -- Gordon Ecker 17:55, 18 October 2006 (CDT)

I'm late replying to this, but I'm going to do so anyway... when either YOU or something you CREATED dies, you can see any Soul Reaping that any Necromancers in the vicinity gain from it. Other than that, you can only see your own (if of course you have any), but just try going undefended into a group of Rot Wallows or something, you'll soon see little purple numbers popping up over your corpse. I'm not sure if this works for pets, but it does work for Spirits and for Minions, as well as yourself. 149.169.109.224 12:23, 11 December 2006 (CST)

Prophecies Eve has been nerfed without our knowledge. Her Soul Reaping has been lowered to 5. I noticed this when I was re-casting spirits of Greater Conflagration in Hell's Precipice - little +5's started popping up over her head.
The good part is that Factions Eve can now be considered to have a "higher" Soul Reaping level, thus making her "better". Entropy 05:48, 19 December 2006 (CST)

Sorry to burst everyone's bubble, but Soul Reaping was changes so as to you will only gain energy from dying spirits if you created them yourself. So unless other players or minions are dying, you won't see the purple +'s over her head. --MagickElf666 23:36, 1 July 2007 (CDT)

I think MagickElf was just trying to point out that testing Eve's SR from spirits won't work. @MagickElf, you might want to look at the date of previous discussions before continuing them. --Ab.Er.Rant

Eve in the old days[edit source]

I don't suppose anyone has a screenshot of Eve before she was remodeled, for comparison? I'm curious what she looked like before that. If nothing else it could be added for historical note. Entropy 04:46, 24 January 2007 (CST)

Click on Eve's picture and then look at the first version that was uploaded. Or click here. --Ab.Er.Rant

Holy crap that old version was ugly. —The preceding unsigned comment was added by Rickyzhou (contribs) .

I think I found a new one! I cant remember it, but I think it's a last mish exclusive. it said something about archenemys and this is where I would want them imprisoned.. I believe it was "If this is where my archenemy is, I'd like them imprisoned here" or something along those lines. Could someone check, find the real quote along these lines, and then add it, please? Ravien Coromana 04:50, 14 August 2007 (CDT)

Three problems. One: Which last mission are you talking about? Two: I'm pretty confident that henchmen don't have storyline-specific quotes. Three: Cynn has a battle quote that talks about her worst enemy and Jin has a quote about prison for Gate of Pain. But other than that, it's pretty difficult to just "go and find it" you know. I'm more inclined to believe that it's one of your heroes that actually quoted it, not Eve. Keep your fingers ready to hit the printscreen button when gaming with h&h ;) --Ab.Er.Rant

I believe it happened for me soon before I got to the area with the titan portals (as I died on Rurik that run). Unless the something else was one of the "Path" quests, or the SF quest you get outside of Deldrimor War Camp, this had to have been fueled by the RoF or Hell's Precipice. Ravien Coromana 04:27, 16 August 2007 (CDT)

I could've sworn one of the Proph henchies has that line for Fire Islands, but upon looking at them it doesn't seem that way --Gimmethegepgun 06:29, 16 August 2007 (CDT)

Hmm... I wonder if these were newly added and are triggered the moment the you hit a certain spot in the mission. --Ab.Er.Rant

I'm confused, does Eve only have 2 skills in GW:EN or does it mean she uses the same things as in Prophecies? If that is the case then Blood Ritual should be removed or the other spells should be added, imo. Going to play with her now and will check her carefully when I'm not healing the team. 212.112.35.243 14:52, 26 August 2007 (CDT)

"Noobersmark" isn't nearly as good post-Nerfing, though I say it's definitely better than using GB without any skills to bump Max Health.

Odd thing, I like to talk to the henches sometimes cause it makes me happy. I am talking to mhenlo and notice that cynn is wearing a thong. because I got that neat seeing past the clothes and seeing the skeleton thing. so I wonder what everone else is wearing. all of the others are normal except eve. she is not wearing underwear. the skeleton is "correct" though not well done. I was in gunnars hold when I did this. ~the rat~

Hottest thing... She dances like an elementalist. Shake it, baby! :D I know this is not fresh news, but felt like posting a picture. ^_^ RoseOfKali 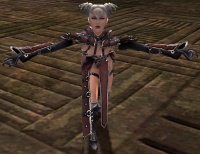 She does, her chin is ugly, but it's always like that. RoseOfKali

It would be really nice if they let her animate at least something. Common, with all the quotes and story? It's just lame not to. At least a lvl 10 Bone Horror, for Adam's sake! RoseOfKali

If she just animates "Something", then she's not going to be effective. If she animates alot... well, maybe the developers just didn't want a MM henchman. The quotes shouldn't have hinted at death magic in the first place. --Ab.Er.Rant

"The line "I asked Grenth, he said He can get me out of this, the rest of you are pretty much shafted," may be inspired by a line said by Stephen of the movie Braveheart."

I think the reference was for a character in the movie. --Ab.Er.Rant

Possible BG2 reference? In the game theres a talking sword that says "I love the smell of daisies in the morning" http://tr.wikipedia.org/wiki/Lilarcor

I would've thought it would be an Apocalypse Now reference ("I love the smell of napalm in the morning."). King Neoterikos 07:36, 6 February 2009 (UTC)

Yes, they're both referencing Apocalypse Now. Surprised that's not on here yet. —Dr Ishmael

I love Eve :P She is the face of GW and looks dam nice 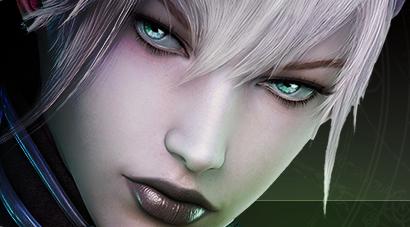 True, but in the game she doesn't look that nice, her chin looks so fuckin ugly :S 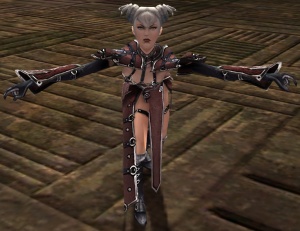 Eve used to look worse. Much worse. Be happy with what you have now. :(

Still Eve is the face of GW. She's on the Box of Proph, on the mousemat and all over the GW site. And looks hot like hell. Even Ingame :P --