I removed the follow text as it should have been a comment "This Information is great but, it is lacking the required collector turn in items. What items are needed to get these from the colloector?" --GraceAlone 14:32, 4 May 2006 (CDT)

To get an Exalted Aegis from Divine Path, you have to get an Amulet of the Mists from Suun after you spawn.

not noticed by Anet???[edit source]

What indication is there that the skull-upside-down effect was not noticed by Anet, as opposed to intentionally preserved? Or, why would Anet have changed it had they noticed it, as the note seem to imply? -User:PanSola (talk to the

I feel the "not noticed comment by ArenaNet" is really quite silly and pointless. Even if it does look a bit like a skull when upside down, there's no way to hold it upside down and that isn't even really a bad thing? -Immortius 06:29, 16 June 2006 (CDT)

Seconded. Who are we to say what they noticed and what they didn't? What if the shield was designed that way, and ANet liked it for its duality, and... Suffice to say, vote to remove. Kessel 02:03, 22 June 2006 (CDT)

Yes, thank you. Great. You see a skull/demon/bogeyman in the shield's model, when you hold your monitor up-side down or when you do a hand-stand in front of your computer, I get it. That's just a visual effect, purely unintended. Kindly get over it. This is a game, not Impressionism 101. --Black Ark 09:19, 21 July 2006 (CDT)

Dude put it into paint and flip it, it is seriously cool i want THAT shield! - Baron 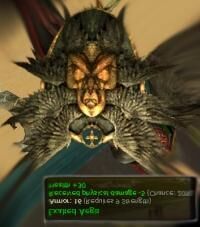 Seeing as how i'm new and do not know much about wiki format, I was wondering if anyone else noticed the ingame update where they changed the Received damage -5 (Chance: 20%) to Reduces Physical Damage by 5. Lute 09:08, 21 July 2006 (CDT)

I changed the description. I noticed it in-game when I found a shield that reduced damage taken by 2, then checked my own Exalted Aegis. Casters rejoice, I guess... --Black Ark 09:15, 21 July 2006 (CDT)

Well take a look at

but since he tried to replace it I can't RV. I don't have the sheild anymore and always appear that dark for me. I mostly play with post-process off because it make screenshot a little blurry. Maybe that is why.—├ Aratak ┤ 15:09, 17 January 2007 (CST)

I don't pvp often but, but how exacly could this be considered the best shield when Warriors already have high armor against phys damage? And is this really used often in pvp? I find it hard to believe. Even rangers have more armor against ele damage than warriors. I thought pvp players would be using somethin like crippling/blind reduction, or armor vs. fire/earth, etc. P A R A S I T I C 20:59, 20 April 2007 (CDT)

I'm not quite sure how to add the information myself, but with the release of the Command and Motivation versions from the Adept of Spears, the page will need amending. Captain Yimuru 10:18, 4 April 2008 (UTC)