This skill is really underused, but it's great for RA.

Even though in the update it says the duration has been increased, it is just as bad as before. With a longer duration, this skill, together with lots of healing, would be a solution to killing riposte warriors!

The solution to killing Riposte warriors is to ignore them and let a nuker or hexer kick their butts. Even 15 seconds is already a nice long time for a spike (enough time to build up adrenaline and spike, even, if you're a W/A rather than an assassin). This skill is optimal against Distortion users or teams supported by Prot monks (with Guardian and Aegis) rather than warriors, anyway. — 130.58 (talk) 18:58, 26 October 2006 (CDT)

The hell? The duration still isn't increased. With 10 points in DA the duration is still a shitty 8 seconds. Pretty damned useless for the most part if it's just EIGHT seconds. By the time the foe runs and turns around the hex is over. ~ Melton 01:19, 29 October 2006 (CDT)

OMG I cant stand this! I even bought a 15k mask of deadly arts for a whole new build when I saw the skill balance update, and the damn skill hasnt changed! Please change it! And fast!

It's been changed, finally. This skill is kicks arse now. Entheos Geon

This has got to be the best Assassin hex ever. Low recharge, long duration, it practically guarantees you will land all your hits, and as a bonus it enables at least a few skills that require a hex. It hasn't left my skillbar since the first time I tried my 'sin in PvP. - Insidious420 20:42, 4 January 2007 (CST)

The numbers themselves are entirely wrong. The skill still isn't updated yet, sadly for assassins. Stances still kill our combos. ~ Melton 03:00, 1 November 2006 (CST)

Does this hex, once cast on a foe, disallow foe to block any attacks, or does it only disallow blocking attacks from the assassin that cast the hex? I was thinking of unlocking it for a hero, but if it only affects the caster (as in, no one else gets unblockable hits), then it is severely limited in usefulness and not worth it. Queen Schmuck 17:40, 9 April 2007 (CDT)

Only the caster, but unlock it if you ever want to play a BoA sin. In HA, it's invaluable with dealing against Aegis, Ward against Meele, w/e have you.--Nog64Talk

I can easily see that causing large amounts of nastiness in PvP. *cringe* I might even be tempted to use my PvP A for a IAS unblockable quick combo killing machine. Thanks for the low down on it being wasted for hero use only. :P Queen Schmuck 17:44, 9 April 2007 (CDT)

Assassin skills are selfish, get use to it lol. All skills in the assassin profesion are either mentioning YOU or TARGET FOE. there is ONE skill, ONE SKILL that hits more than one other foe(Death blossum) Also its an amazingly good skill, the reason? 10 second cast time aout 17 second duration? Also the effect is that can't block???ummm...why isFox's Promise an elite and not this lol.

Yeah, only I was wanting a non-necro faster recharge version. :( Guess I will stick to what I have been doing before, enchant strip and wild blow Dervish. Queen Schmuck 18:28, 12 April 2007 (CDT)

It also nerfed blossom/moebius. having that unblockable all the time for a small investment was way imba. it also made the fox combo rather useless and fox's promise useless - Skakid9090 20:24, 16 July 2007 (CDT)

Didn't do anything to SP besides making the spike 25 seconds (and even then, ED isn't always needed)-_-... But if it was aimed at Moebius, then yeah, ouch. Side note: 10 nerfs to the SP Sin, and it still works great. LavaEdge324++

Same as with Assassin's Promise then.

Could this skill possibly be overpowered? I personally think it's good enough to be an elite. People would definitely still use it. A normal skill which can trump an elite skill like Shield of Deflection definitely needs to have a looking at, in my mind.

sole reason: Affects everyone on your team. --

... read above, Rigor was superior since a decent time --

On a Hi-Quality version of the skill's icon, two people can be seen clearly. The left one is hitting the other with his elbow. However, the picutre seems to be rotated by 90° CW. Worth adding as a trivia? cKow/Dont 17:08, 22 November 2007 (UTC) 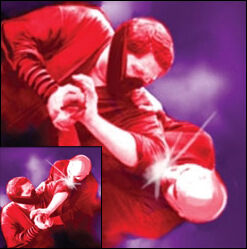 Rigor Mortis has this skill lock in every category, with the exception of being Curses, this really needs to be buffed, to 5 energy, 1/4 casting, lower recharge, something to give it some kind of edge over Rigor Mortis. =/ Vainity And Sorrow 00:32, 31 December 2007 (UTC)

Still needs to be changed so it is "different". Like give it a 1/4 cast time and reduce energy cost to 5. No one cares about the short duration, as sin chains should be compeleted in the aloted time. --