Talk:Eye of the North (outpost)

No, because Eye of the North has the Town icon on the map like Ascalon and LA, rather than the Outpost icon like Warcamp or something --Gimmethegepgun 18:57, 24 August 2007 (CDT)

If going to rename, would suggest using "Eye of the North (Location)". --Wolfie

"Location" is used for Outposts that become Missions, so we have 2 focused articles ("My Home (Location)" and "My Home (Mission)"). Now, considering the NPCs and services offered in EotN, it should be a town.

What the hell is this place?[edit source]

For place which is also the title of the entire expansion, this place somehow manages to avoid all attempts at explaining what the hell it is, and why it is there other than some excuse for a plot device of a scrying pool and the hall of monuments. It otherwise serves no purpose and isn't even referenced by anyone outside of it. --Ckal Ktak 15:55, 18 September 2007 (CDT)

Probably has some huge importance in GW2 and a connection to the dragons but it is pretty odd that they didn't add more to it. The Madgod 23:11, 26 November 2007 (UTC)

It's a tremendous construction built by something more powerful than humans/dwarves/whatever as your character concludes. It's said right in the description that it existed even before the norn arrived and it's so ancient all history of why or what it is is lost. My guess is that we'll learn more in GW2. What i'm most curious about, is the monument of valor. instead of a tapestry it's a wavering dark blue image with some kind of picture in it, looks like a person. The place itself seems very connected to the destroyers because obviously it shows you visions of them and the lair they chose (i don't think the final boss area is the origin of the destroyers). So it must have been watching and following them. Also you can only store destroyer weapons inside.

If you look at the top of the structure from the outside, it looks like there was more to it at one point in time. Also, judging by all of the eagle head sculptures there are inside and around the Eye, perhaps the Eye and Silver Eagle armor are related to each other in some way. Siril Frein 20:46, 30 September 2008 (UTC)

I recently got a mini water djinn and had it out in this outpost. I was looking at it when I noticed something strange, and was wondering if it was only me (perhaps a graphical issue). When I panned the camera so that I could see the sheets of ice that are in between the columns that support the structure, my mini water Djinn's graphics were distorted, as if they were behind the ice sheets. I will post a screen. 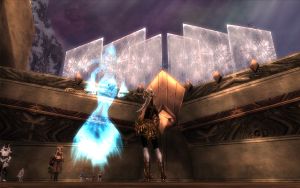 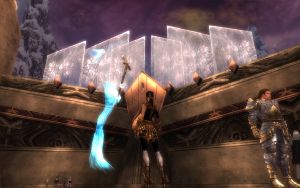 Well, I'm no expert, but I'd guess it has something to do wth the semi-transparency of the djinn messing up.--