Agreed to merge and cleanup. If this article gets merged, please redirect links in the Victory Tokens article as well. Thanks! --

Shouldn't this be moved to Boardwalk Prize instead of merged with Shing Jea Boardwalk? --Smurf

I agree with Smurf as well. Move to Boardwalk Prize to get rid of the pluralization. In regards to the cleanup, this page should probably have a very similar layout to the Festival Prize page since the items are so closely related. —Vendetta411 14:37, 21 October 2006 (CDT)

I agree. Do not merge with the Boardwalk article. — Jyro X

Anyone know the the approximate chances for getting each? --MasterPatricko (sorry, can't log in)

Here are my % from opening 250 prizes

Just for interest I opened 50 of my prizes in a game area under 'lucky aura' but there was no obvious benefit in terms of the rewards recieved from doing so that I could discerne.

It says that the percentage forgetting a plat out of a prize is 5% but in my experience and with some of the people I have talked to is that it is more like 10%. In the last 2 finale's I have for every 50 prizes I have gotten 4-5 plat. It's the same story with people in my guild too. -Strato (talk)

I believe all the old festival prizes turned into Boardwalk Prizes. Unless I missplaced my festival prize. Can anyone else confirm this or am I mistaken? --Smurf

I disagree with move/merge. The Boardwalk Prizes ARE probably the Festival Prizes witha twist, however, they were called Festival Prizes and if anyone still has them, I bet their names have not been changed. Just mention each in the other's article. --Karlos 13:17, 21 October 2006 (CDT)

It shouldn't be moved. The Boardwalk Prize article has already been created. This one should be kept in-tact and a note should be attached that these items no longer exist. — Jyro X

Has anyone tested to see if the "new" prizes stack with the "old" prizes? If they do, then I would bet that they actually changed the "old" ones to the "new" ones and you won't get Jade Wind Orbs from any of the old ones anymore. --Rainith 20:51, 21 October 2006 (CDT)

Oh. If the name has been changed, then we MUST merge. Why keep two separate articles for the same item? Just make a redirect from Festival Prize to Boardwalk Prize and then place a note about the name change (and the different outcome) in the main article. --Karlos 21:10, 21 October 2006 (CDT)

Note that the % chances are no longer accurate with regards to the new statistics.

I'd like to mention that both the note about the % chances being inaccurate to the figures and the total prizes opened are incorrect. The original person who added this clearly intended 1400 prizes that gave 5 each for a total of 7000 (considering it's the same person who gave percentages in the first place), which seems to have since been misinterpreted both by people adding to the count, and whoever added the "total prizes opened" figure. - 71.224.123.149 12:05, 9 July 2007 (CDT)

I uploaded screenshots of the misspelling of "festival" in the Dragon festival redux for use in either this article or the dragon festival article.

I didn't just want to make edits without asking. Would these be appropriate to include in one of the articles? 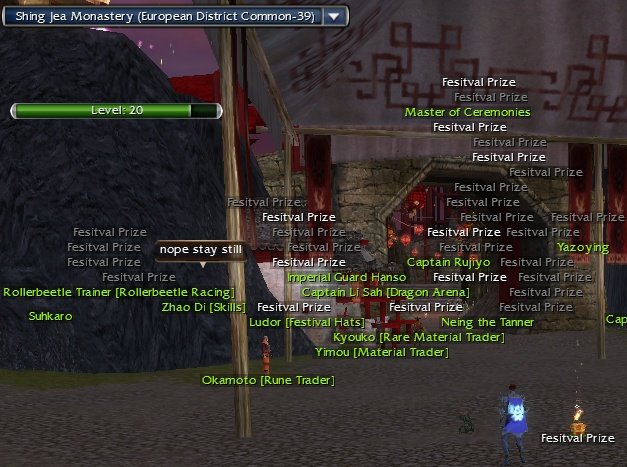 I have, on my mule at this very moment, during the "Farewell to Gaile" event, 700 "Festival Prizes" (not the misspelled ones).

5) No, they are NOT "Fesitval Prizes". Yes I have screeny's.

Kao Tseng still gives out FESTIVAL prizes, not boardwalk (as of Canthan New Year 2009), so the redirect is actually backwards, FESTIVAL PRIZE should be where the article is located, and the notes say they don't exist anymore, that is not true, I just picked up 5 for kicks and giggles, cus it's not worth trading the 25 tickets for them. Did they switch the name back? Or what happened? RoseOfKali

So back to that... It's Dragon Festival 09 and they're still Festival Prizes. Can an admin please move this to Festival Prize? Afaik Boardwalk Prizes no longer exist. RoseOfKali

I would assume these give lunar tokens during canthan new year. How many? LOST-Merick 21:47, 1 February 2009 (UTC)

No, victory tokens, 5 per roll. RoseOfKali

Based on rate data from GWW, if you open the prizes, you will receive, over time, items with a street value of approximately 220