http://photics.com/flesh-of-my-flesh photics call it flesh of my flesh.. go ahead any change?

It works on more than just Party Members? -User:PanSola (talk to the

I have not been able to revive anyone but my party members. It seems as if it just like any other rez spell in that regard. --Chrono traveller 14:33, 24 May 2006 (CDT)

Will this work on a dead 55 character?[edit source]

The 55 build is impossible to resurrect with anything besides a skill that gives 100 percent life back. Would this spell work considering that it gives raw hitpoints instead of hitpoint percentages?

Yes, this spell is prefect for a 55 monk. Gets rid of the need to take Vengence altogether.--— xis10al

In PVP Flesh of my Flesh is a good alternate res for characters who don't need energy when they get up, like warriors (but not monks, use res sig on them). It's really good on a mesmer that doesn't need its secondary class and has no skill points left, because Flesh doesn't get much better when you add more points to its attribute. And with 14 Fast Casting you can get the spell off in like 2.6 seconds.

The old note is correct. After using FoMF you and the resurrected party member will have the same amount of health (maybe plus or minus one). That amount will be half the health the caster had just before FoMF finishes activation. --Fyren 08:47, 7 April 2007 (CDT) 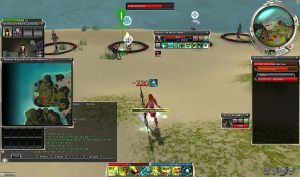 That appears to be evidence of what I said, so would you mind reverting to my edit, or saying something similar? I can't due to GW:1RV. Even though it is clearly not what the skill description says should happen, it wouldn't be the first skill in GW to be like that. Issa Dabir 14:02, 7 April 2007 (CDT)

Hmm. I must have just been looking at the health bar, and rezzing people with less health than me (probably death penalty now that I think about it), because I always noticed their health bar was about twice as long as mine after using this skill. Oops. Issa Dabir 14:56, 7 April 2007 (CDT)

In PvE, im running a Ranger/Rt and Flesh of My Flesh is instantly recharging for me without any downtime. It's consistant and has happened in two seperate instances with my henchies out on Noob Island. Anyone else notice this? Shireen 16:24, 28 June 2007 (CDT)

lol don't worry, I did the same thing, look at this.--

FoMF is a fairly common term, so I doubt it. Has biblical implications even, I think.

Not really common, but far far older than an album by a rapper. It's either biblical or mythological (religious?), I can't be bothered finding out. --Kale Ironfist 00:58, 5 October 2007 (UTC)

And Adam said, This is now bone of my bones, and flesh of my flesh: she shall be called Woman, because she was taken out of Man.
-- Genesis 2: 23 (KJV)
(not bad for an atheist, eh?) --Snograt

You appear to be right. Changed.

I doubt it was even glance at fromt this, but should it be noted in trivia, that Adolf Hitler used the phrase "...flesh of our flesh, blood of our blood..."

Lose half your Health - bug?[edit source]

i was death leveling a pet, had gwen with all skills dissabled but flesh of my flesh. had meandig and watchful on her from another hero. i have a lv 20 ranger with hat and pants with sup runes and the -50hp offhand. when rezzed, i have 1 hp. but for a while gwen was only loosing .25 health according to the party window. i minimized, came back, and looked at actual health numbers, and both those numbers and the party window were back to half. another odd think was i got down to 56% dp fast... then stayed there through a couple rezzes. so thinks may have been just out of wack with me for a little bit. --Mooseyfate 17:32, 12 February 2008 (UTC)

Hero interface is still kinda glitchy, and if you die within a certain amount of time after being rezzed you don't get additional DP --Gimmethegepgun 23:08, 12 February 2008 (UTC)

Since they've started putting the red dots for the skill formating when you sacrifice health why does this skill spell it out 'lose half your health'?--Bastthegatekeeper 01:21, 25 May 2008 (UTC)

Well, if it did, then a LOT more people would carry around Scourge Sacrifice, since it would make you instakill yourself whenever you used it --Gimmethegepgun 06:03, 25 May 2008 (UTC)

That would be AWESOME.

While death leveling, I noticed this skill didn't res me sometimes, animation, skill casting and energy loss on the caster did occur. I clearly have this on video. Anyone else noticed this? ~ Flightmare 21:06, 26 April 2009 (UTC)