I saw this staff drop once from Shiro'ken, though I didin't catch which one. But it was in Unwaking Waters(Explorable) so it must've been either warrior, assasin or ranger.

I have salvaged Iron (common) and Steel (rare) from Forbidden Staves. I would have added this info to the page directly, but couldn't figure out how, because the page style differs from the Amber Staff page I copied the salvage format from. Queen of Spades 15:21, 13 August 2006 (CDT)

what? this isn't true. indeed, the opposite is colored. just got one and tested...not the handle is colored, but the two iron peaces at booth ends of the staff... --

well, color grid with staffs is a little stupid, because you can't see them good in the preview :/ ...but here's one image, colored white ((god why have mesmers purple underwear @.@)): 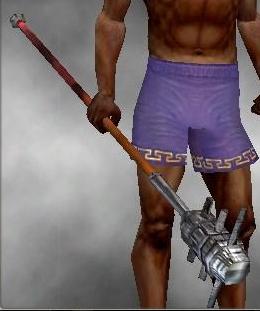