What can a formed character do?[edit source]

Have anyone else noticed that the form doesn't wear off if you are moving to an NPC, i.e. clicking his name to walk there, when the duration expires? The effects ends (easy noticable due to Avatar of Balthazar's increased speed, Lyssa's increased energy and melandru's increased health) but your appearance is still the one of the avatar (only way to see AoB run normaly? ;). Have only tested this on AoB, but I guess there should be no difference between the forms. I wonder if it works in the same way while running to drops, chests etc. or other players... I've got a few screenshots: http://gw.gamewikis.org/wiki/Image:Gw757.jpg and http://gw.gamewikis.org/wiki/Image:AoDnoform.jpg Yaki 14:30, 7 March 2007 (CST)

Are there non-elite forms?[edit source]

correct, there are no non-elite forms - is that your question?

Yes, that was my question. Do you have trouble comprehending English? Lester Dragonshield 11:59, 31 July 2006 (CDT)

The wiki's naming convention is to class all gold-bordered skills as Elite in front, regardless of whether there are non-elite skills of that type. This is to future-proof us against the possibility of non-elite forms. Kessel 05:45, 1 August 2006 (CDT)
I don't believe he has trouble understanding English- you, however, do appear to have trouble writing it. You yourself say "there aren't any non-elite Forms," so your question doesn't really seem like much of a question.24.53.130.233 00:08, 27 September 2006 (CDT)

And they just released a spoiler-filled screenshot (even if it is just spoilers for the second mission) of someone using what appears to be Avatar of Abaddon. -- Gordon Ecker 19:37, 20 October 2006 (CDT)

Yeah, currently there's only the five elite forms, although there could be monster-only forms in the elite mission or other non-elite forms in c4. -- Gordon Ecker 23:52, 15 November 2006 (CST)

And we now have two non-elite forms, the snowball arena versions of Avatar of Dwayna and Avatar of Grenth. -- Gordon Ecker 07:08, 30 December 2006 (CST)

Sure, if you had one of the 5 forms we know and another elite it'd be overpowered, but there's no reason they couldn't make a less powerful non-elite form that's balanced compared to other non-elite skills. -- Gordon Ecker 04:03, 8 July 2007 (CDT)

Alright, I admit - I'm at a loss here. Does that mean that all actions, including emotes, are stopped without any chance of preventing it? I didn't play around with the forms for very long, but I guess it'd make sense, if only to stop Dervishes from reverting to their regular form while still dancing like, say, a male Warrior. --Black Ark 06:33, 1 August 2006 (CDT)

My impression of "hard interrupt" was an interrupt which interrupts any type of skill, but I've rarely heard anyone use the term. The article seems to use it to mean an interrupt that cannot be prevented. Unless someone can support the article's use, feel free to remove the term. --68.142.14.106 10:23, 1 August 2006 (CDT)

That's not a real term to my knowledge, I think they were trying to create a new term. The way the interrupt works (through mantra of resolve, through anti-knockdown) can only currently be reproduced by pressing the "supress action" key (default = escape) while casting--no enemy can force that. Although, along the same lines, no enemy can force a Form to end (to my knowledge). --Alekti 10:59, 1 August 2006 (CDT)

Basically, if you're doing /anything/ at the end of a form it stops. Attacking, casting, whatever. You begin to stand there like a fool, if I recall correctly. Kessel 05:30, 2 August 2006 (CDT)

Did anyone check whether a skill that's in mid-activation needs to recharge like with direct or indirect (such as knockdown or death) interruption or is able to be reactivated immediately like with skill failure and cancelled skills? -- Gordon Ecker 02:43, 8 August 2006 (CDT)

"When a form ends, you are interrupted." I've been thinking of this term too; wehter you are actually interuppted or not. If you are activating a skill when a form ends, it is canceled rather than interuppted; it's the same effect as experienced by pressing the Esc-key. Additionaly, read my first input under "What can a formed character do?" Yaki 14:30, 20 April 2007 (CDT)

Where the skills themselves have a short (from what i remember, 5 second) recharge, why do they all say "this skill is disabled for 120 seconds"? The only reason I can think is if it's interrupted mid-cast. Is it just that, or are there other possibilities in terms of recharge? Hmm, i guess another one could be the use of QZ to speed up the recharge. Any thoughts? Bubbinska 04:38, 20 September 2006 (CDT)

Yeah, it's probably just for balance. If forms were easy to shut down, it would be hard to balance them without shortening the durations and recharge times. -- Gordon Ecker 19:55, 1 October 2006 (CDT)

They have a 30 second recharge to account for if the skill should be interrupted. If the skill is successful, it is disabled for 120 seconds, and the fact that it is disabled makes QZ and other skill recharge items or skills ineffective; the only way to jump the 120 second timer is to get a morale boost. 205.250.191.69 02:10, 1 May 2007 (CDT)

Where all else fails, Simple Thievery might work. --Theeth

Why not just have a Dervish Secondary and equip a form? There is no way to have a form last any longer than 15 seconds on a Secondary Dervish, unless you use a blessing from a God's Avatar (the ones found at statues). Not even Signet of Illusions can do anything, becuase it only works on spells. --Curse You 03:07, 12 November 2006 (CST)

Simple Thievery can definitely steal Avatar of X skills; the boss with Simple Thievery stole and immediately used Avatar of Lyssa the first time I fought him. That hurt! :) Issa Dabir 07:51, 18 March 2007 (CDT)

Am I the only one here who thinks that these are really overrated? I cant count the number of times while joining a group with my dervish that iv been asked "Wh4t foRm r U UsiInG!!!11!!1111!!!"--Coloneh RIP

What is the EoE effect on them? Are Forms still considered human? If not, are all avatars considered the same creatures or each type of avatar is a different creature?

Yes, I tried it in Isle of the Nameless, let my hero die while I had EoE up (yes, making sure that my hp was <90%). Both with Balthazar and without balthazar up it hit me.

It says forms are always elite skills. This should be changed as the forms in Dwayna Vs Grenth are not elite

they are holiday skills, i really dont think they count--Coloneh RIP

They wouldn't count, since the skills in the event are event-only, and do not affect gameplay. Nalee Everborn 03:38, 29 December 2006 (CST)

Is there any way to get past the disability?--Xeones

i have noticed while using forms that there is a visable partical effect on the character when you use the skill and when it wears off, i'm sure everyone has noticed this. has anyone else noticed that when the effect wears of there is another partical effect at the original spot the form was cast? i have a screenshot that shows this phenomona if anyone wishes to see it. not really of any interest tactically other than that you can use it to psuedo track a dervish if you get lucky enough to see it. tetracycloide

When a form ends on me, my character becomes like this: 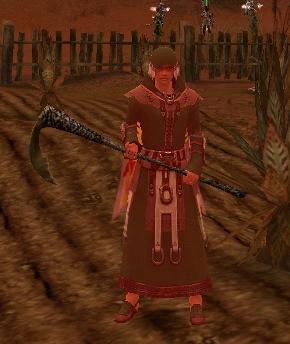 Not sure it is actually a graphics card issue, I was playing with a guidmate when he asked "why is Melonni all red", I looked on my system, and sure enough, she was red for me too. He does have an impressive graphics card, but I do not think it is THAT good that it can make things change colour on my system miles away (-: --Heurist 09:24, 26 April 2007 (CDT)

It seems to have to do with getting hit as the form end. For whatever reason, when the games locks in your skin when the form ends, it will lock it in with the red flash you get from being hit. Mechasoupx 10:46, 26 April 2007 (CDT)

It just happened for me too

Replaced that AWFUL melonni pic with that one up there. Flag through face = bad.

Was still a pretty good picture besides that, should probably put in both (to show that both heroes and players can be affected by it) --Gimmethegepgun 23:52, 15 November 2007 (UTC)

Just had Zhed use one to see if anything particularly interesting happened, and while it worked the same as on any other hero, ther was still something wrong about the whole thing... -Kumdori 23:16, 12 July 2007 (CDT)

Makes me think of how my Dervish is normally a near midget, but becomes a giant when he uses a form. Anyways, I need to try this, and making Vekk, Ogden, Jora and Pyre use a form. --Curse You

I just tested with the above heroes, they all go to the same size, which is still shorter then the player form, which is the same size across all players.--

Just letting you guys know I've noticed a few times that while moving, if my Avatar of Dwayna ends, I do lose the effect from my effects monitor, but I don't get stopped and can continue moving while still holding the appearance of the Avatar. However, as soon as I stop I shift back. Dunno if it's lag or not, but ehh.

I had wery same styled bugs. I am movin while avatar of Dwayna on, form ends, i stop, i am interupted, but look of the avatar stays. It only ends whenn i activate skill again. I have some screenshots from this.

By removing a piece of armor while red I was able to go back to normal colors. I haven't had a chance to try this again, but if we can get some confirmation that this method works for other people we could add that to the article as a workaround. Perrsun 01:02, 11 August 2007 (CDT)

Bear Form and few other skills from GWEN made Forms not only for Dervishes. — Abedeus

Right? I mean, pointless in PvE with Eternal Aura, but it will work. And maybe in PvP too.

Mist Form and Shadow Form. Questions, comments, concerns? Both are specifically named Forms, yet are enchantments, hence susceptible to enchantment removal. I think that there would be both pros and cons to making these 2 Enchantment Spells into Forms.

Good: Can't be stripped, wouldn't trigger skills such as Scourge Enchantment, being actual Forms would open up a possibility of boosting those skills (For example, Mist Form: "All attacks against you deal 0 damage, and your attacks deal Cold Damage" and Shadow Form: "When this skill ends, all your other skills are disabled for 10 seconds" as opposed to "You loose all bu 43 Health"). Bad: Wouldn't benefit from "...of Enchanting" mods, wouldn't trigger skills such as Mystic Regeneration, wouldn't trigger Insignia and Weapon benefits such as "Health +45 while Enchanted" or "Armor +10 while Enchanted".

Then, they could perhaps create a new Insignia, like "Shapeshifter Insignia: Armor +10 while under the effects of a Form". I don't know, just speculating. Anyone else ever think about it that way?--MagickElf666 21:45, 15 November 2007 (UTC)

While it would make it kind of interesting, Shadow Form does NOT need any more changes that make it more difficult to get rid of them, and a Shapeshifter insignia is the LAST thing we need to give the tree --Gimmethegepgun 23:34, 15 November 2007 (UTC)

This makes sense. Now it can't be Arcane Mimicried.

When the form ends...[edit source]

...if you are KDd, you suddenly no longer aren't. Had this happen a few times while playing an assassin, KDed a formed dervish and went for the 'falling' attack, but midway to it their form ends, and they are then standing, and don't count as a knocked down target. Annoying in the sense that KD-requiring skills (Ash Blast, Fetid Ground, etc) are harmed by this effect. -- IGN: Angelo Silverwolf

I think that them dropping out of their form is punishment enough.--