Unless they removed Barrage from his skillset, I don't see how he could be in this mission. Can anyone confirm he's in it?

Map seems accurate to me at first glance. I've added a small line to the primary walkthrough. You must kill the 2 'regular' Charr as well to end the mission, not only the boss. --Erszebet 09:47, 13 February 2007 (CST)

Aggroing the Charr is NOT suicide, I did it once. All my party members were lvl 10 and below.

I nuked them all with Searing Flames and i grinned evily while laughing my ass off at their pittiful attempts at survival >.> --Cosmitz 17:48, 3 May 2008 (UTC)

You can avoid Shield of Judgment most of the time just by switching targets. Some of the hard mode tips were patently goofy, so I partially rewrote the section, and moved it up to the walkthrough area. Quizzical 22:54, 19 December 2007 (UTC)

If you have Divine Spirit or other skills that prevent more than 10% health loss, and get hit with the attack, would you get killed, or just watch all charr die and gain massive experience? What about Reversal of Fortune, Reversal of Damage, Shield of Absorption, etc? Is the Siege attack armor ignoring, enchantment ignoring damage (as in, is not affected by anything and always deals same damage to all characters and levels)? Can someone test my theory (I don't have any monk secondaries) --MagickElf666 16:14, 4 May 2007 (CDT)

Out of a very limited test on my tahlk, Prot Spirit does limit the damage to only 10%, while reversal of fortune did nothing noticeable. If I remember I'll try tomorrow with a friend to see the results from both sides as well. -- Tsukan 01:06, 24 July 2007 (CDT)

Your party contains character's from other campain's[edit source]

My monk from factions started the mission withb the 3 necro's en got the message "Your party contains character's from other campain's do you want to go on?" Anyone else had this before and should I edit it on notes? User: Invoker Of Love

Any time a non-native charater plays missions in a campaign before their "starting point" (Lion's Arch in this case), that message shows up to warn you that you won't be getting any exp for finishing the mission. It's not entirely accurate, though, since Factions and Nightfall missions still give rewards. Entropy

Couldn't get to Saberlin to activate the bonus, I was being cock blocked by the Captive Soldier.

I gave them plenty of time of run out, they simply would not move, it was as if the soldier was stuck. 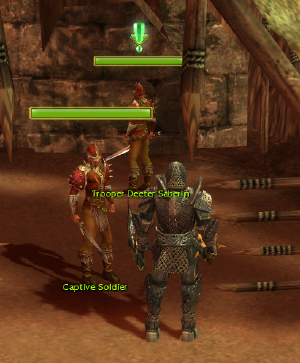 I realise I am standing in their way in this pic. I assure you they would not move no matter what I did, I even continued on to the trebuchet cut scene and came back. --Webley 07:27, March 26, 2010 (UTC)