Can someone confirm it is just "Freezie" and not "Mr.Freezie" or something? I never clicked on him, but I recall Scrappy Jhim saying he'll call him "Mr.Freezie." --Karlos 17:53, 27 December 2005 (UTC)

I believe I have a SS at home that confirms it is just Freezie. I will post it later on if no one else confirms/contradicts me. --Rainith 17:58, 27 December 2005 (UTC) 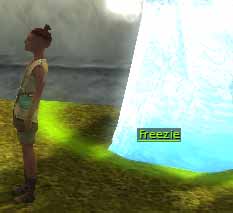 The article says Freezie is identical, size, level, name and lack of frown excepted, to a Brrl, but the Brrl article has them armed with the skill Frozen Burst and Freezie is, in the Freezie article, not wielding it. If even the skill list is different, then it may be worth it to wipe that line. PurpleXVI 11:00, 22 December 2006 (CST)

Yes, I agree, it doesn't make sense anyway it is "identical to X except for A,B,C,D,E... list goes on" --Jamie

I remember a "Freezie" enemy in the old Mario Brothers Arcade Game (also released on the NES). I put it in the trivia a few days ago.

I remeber that too, but I highly doubt that it's a reference. How would you know it's a freezie that are served at some icee-cream places, or just named that cuz its... frozen. I'm removing it.--

Look at the similarity in the shape. Freezie in Mario Brothers almost looks identical, with all the little pointed icicles.

I added that he drops elite monk tomes in hard mode, it seemed appropriate since none of the monsters here use normal skills, yet he has a monk aura. I have a screen if anyone wants proof.-Malcheior Sveth 03:48, 21 October 2007 (UTC)

BTW there is Mini Freezie and I cannot find the price anywhere, nor can I find any information other than it exists. Anyone know anything about that?

He's a third-year purple birthday mini. No idea what it would cost though.

See Miniature. We don't keep track of prices, though considering its relative rarity I would not be surprised at a very high price.