Yes, a poor skill. A third addition to the Eviscerate/Executioner's combo Skuld

When Anet decided on weilding their nerfbat, they got something right. This is a half-decent skill now! --Mgrinshpon 17:28, 27 October 2006 (CDT)

Err, This skill is now uber. Axe Mastery now has some rediculously damaging energy attacks at its disposal. Like, seriously, this skill does only 5 less damage than Executioner's Strike and recharges in 6 seconds. Duncan Dragoon 03:52, 21 December 2006 (CST)

Neither of those are better, prot strike is conditional and at that they have to be moving which means 90% of the time u have to have a speed boost for it to take effect. and crit chop... well... 15sec recharge? this is +74 dmg every 12 seconds....

Damage isn't everything... Critical Chop is better because it works very well in spikes with a half activation time. Protector's Strike is better for the same reason, but it also makes them stop moving for fear of taking the extra damage... only to take the high base damage of a Warrior while they don't move. --Kale Ironfist 00:24, 14 July 2007 (CDT)

If you used Furious Axe twice, that would be +74 damage in exactly 14.66 seconds, not counting lag, rounded up is 15 seconds... But I digress, as Kale is correct in mentioning Crit Chop's halfcast and interrupt potential as reason to use it, though the interrupt potential is unreliable at best.

There's not much call for coordinated spike in PvE, however PvE foes are also stupid enough to flee and let you spam Prot Strike / Bull's Strike. Thus, Furious Axe = not as good in PvP as Crit Chop / Prot Strike, but in PvE you can get away with it since pure damage is fine. Furious Axe's secondary effect is pretty meh, since there is Swift Chop y'know. I'd take an automatic Deep Wound over +3 strikes of Adrenaline anyday, and Swift Chop recharges faster too. On the other hand, there's no reason not to take all the skills, if your bar has room...Furious + Critical Chop is pretty close to Executioner's Chop + Critical Chop in terms of spikage, for example. Though since no decent Axe bar doesn't carry Exe Chop it is kind of a moot point. >.>

Now that everything is considered Blocking (and not Evading), this is quite a bit more useful.

Not really, Furious Axe triggered on both block and evade before. Therefore, there is no change in functionality. ~Seef II 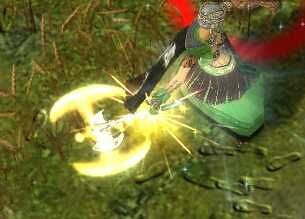