"the" already existed and "The Frog" is not acceptable in English language style. You say I have been to the United States, not The United States. --Karlos 02:47, 2 January 2006 (UTC)

Actually I was keeping the capitalization to stress that it was Frog#The Frog and not just any Frog. The same as it is capitalized in that part of that article in fact. --Rainith 02:52, 2 January 2006 (UTC)

Yes, in English if someone is called "The Incredible Hulk" then in the midst of a sentence you would type: "I met the Incredible Hulk" you would not capitalize "the".
As far as "The Frog" vs "Frog" we all agreed that the "frog" without "the" section should be gone long ago. --Karlos 02:59, 2 January 2006 (UTC)

This is not even part of grammar. :) Here:
[ http://www.factmonster.com/ipka/A0771333.html]
The relevant example: Names for the Deity and sacred works: God, the Almighty, Jesus, Allah, the Supreme Being, the Bible, the Qu'ran, the Talmud. From the same page you will see that only "The" at the beginning of newspaper names is capitalized like "The Washington Post."
Making the edit with your anonymous IP will not help either. If you cannot prove using facts that the T should be capitalized, then I suggest you leave it. --Karlos 03:55, 2 January 2006 (UTC)

Maybe a discenting opinion: 7. Capitalization â€“ Words at the beginning of sentences arenâ€™t the only ones worthy of capital letters. Always capitalize proper names such as people and places. Titles of all kinds deserve capital letters and so do acronyms. from here. Couple that with the frog talk where he states "The Frog is The Frog" and every time there is anything in the middle of a sentance it is capitalized that way. I'm guessing it is:
First name - The
Last name - Frog
--Rainith 04:02, 2 January 2006 (UTC)

Umm, the is an article it is not a part of a proper noun except in the titles of books, poems and magazines. When you start writing that The United States called for action and that The White House made a request, then you can writing that you saw The Frog. Also, how a developer in ANet chooses to fool around with the English language is not a reference. --Karlos 04:19, 2 January 2006 (UTC)

Yes you are right the "The" In the United States is not capitalized but the "The" In the United States is not part of the name. If had my name legally changed to "The" you would capitalze it, because it is my name. Because the name "The" would not be the same thing as the word "the". For instance the famous actor/wrestler "The Rock" has "the" in his name capitalized, because it is part of his name. One example of this is his profile on the WWE website [1] --zero rogue 04:39, 2 January 2006 (UTC)

If the "The" is part of the name, then it should be capitalized. If you would say to The Frog, "What does the future hold, The Frog," then it would be appropriate to capitalize "The." If you say, "What does the future hold, Frog," then capitalizing "the" wouldn't be appropriate. However, The Frog consistently refers to himself in-game as "The Frog." [2] Hence, the correct spelling is with a capital "T," since "The" is a part of his name ("The" is not part of the name of the United States, or Jesus, or Allah, or the Bible, where it is simply an article.) --Kiiron 21:15, 2 January 2006 (UTC)

Though I believe Karlos is technically correct, I think the Frog should be referred to as "The Frog" in all articles. Somewhere early in GuildWiki history, it was decided to use all capitalization schemes as presented by the game, regardless of context. While I think this policy is asinine (now we have to capitalize stupid things like Salvage Kit and Bonelace Armor), it's policy, and should be followed until policy is changed.

I'd like to have a proper discussion about the policy in general in GuildWiki talk:Style and formatting, since I would absolutely love to see this change. —Tanaric 23:36, 4 January 2006 (UTC)

Being that I just started a few days ago I havent had the time to read all the guidelines yet. However, if there is a guideline on this I will follow it and capitalize the "The" In frog as it is in Guild Wars. Personaly I think this is a better idea than following grammer since it is exactly how it is in the game. But, to each his/her own. ~zero rogue 22:25, January 05, 2006 (PST)

'The' in 'The Frog' is capitalized in Guildwars at the start of it's sentence just as it should be, but 'the' isn't a proper noun so you can't capitalize it in the middle of a sentence. If you legally have your name changed to start with 'the' then it still wouldn't be a proper noun, you would be called 'The Frog' if you're name started at the beginning, and then the Frog, in the middle of a sentence. The only possible way to make 'the' capitalized in the middle of sentences is if the person's first name was 'The' and their last name was 'Frog'... There's a good reason why we don't call the Frog, 'The'... "Hey, The! What's happening?" lol. It's been 8 months since this was last discussed... so *cough*. If Guildwars uses it differently then it should be noted that they're wrong, add it as a textual bug or something :P (Terra Xin 23:57, 14 September 2007 (CDT))

Probably not worth putting inside the article, but here's some tibits:

It's just part of the female Ranger Krytan armour-art, mine certainly has it. I guess not a lot of female rangers wear that armour in your neck of the woods? --Black Ark 04:35, 14 July 2006 (CDT)

Gaile's birthday is Aug 9. Do ppl think this is significant information to be included in the main article? The info came from her Guru profile, so I don't think privacy in particular would be a concern, but not sure if ppl find it of sufficient relavence. -User:PanSola (talk to the

I don't know if it's particularly relevant; but there's a lot in various trivia sections that are of even more questionable value and accuracy. I say that if it's on her public profile, add it to the trivia section here (with a qualifier explaining the source). --- Barek (talk • contribs) - 18:11, 9 August 2006 (CDT)

Hmm, normally I'd PM her a happy birthday on guru, but I imagine her inbox should be full by now. :p Either way, I am not too sure it is relevant with the information in this article. Most of it seems related to her ranger. — Galil

During the preview her Paragon's name was Gaile Gray Elona, or something similar. I wish I could remember. It was some variation of that anyway. - BeXoR

It has "Gailie Gray Elona", you are right Bexor. And I'm not a stalker, I happened to arrive in Kamadon when she was there. I saw a large crowd and went over and asked her questions.--TheDrifter 20:09, 30 January 2007 (CST)

In her appearance at Shing Jea Monastery on February 18th, she said that she does not control The Frog. I wasn't there when she said it, and I just barely arrived before she left so I cannot give exact quotes or screenshots but I'm sure other wiki users were there, as the district was absolutely full. It took about half an hour of constantly clicking district1 and pressing enter before I got in. VegaObscura 06:58, 18 February 2007 (CST)

Current updates given to us by Gaile Gray:

Better controls for ranger pets are being designed.
The emote for rank 15 is a gerbil (may have been a joke)
The anet staff likes pirates (so there might be pirates in the next installment of GW)
VegaObscura 19:35, 18 February 2007 (CST)

As for the pirates I have one word: Corsairs. --Malec

Maybe this page should be protected... Silver Sunlight

Slight possibility. But protecting requires a very important reason as you can see in Category:Protected pages there aren't a lot of them. This article would need to be cleaned up first though... — Poki#3

person page, should probably be protected from anons. registering is a low bar. --Honorable Sarah

Just a quick question, Can the GM symbol be seen through walls? i haven't seen it yet so that's y i'm asking.

That's not really very accurate information is it? That GM of hers is huge. I don't know if it can be seen through walls, but as you can see here in a close-up and far away shot, it's quite large.

Oh man that was bad i had to pull up the history logs there just to see what everyone was talking about, left bad images in my head... -Chrisworld 03:49, 15 November 2007 (UTC)

Not sure if this is worth mentioning, but i was talking to her just now, some1 came on and asked, in spanish, about when the bonus mission pack came on, my spanish is very old and rusty, but knew for sure i was right moments l8r when she said something along the lines of mission pack=noviebre 29. so she seems to speak some spanish, again prolly worthless info67.171.247.5 09:42, 22 November 2007 (UTC)

She can also speak a little bit of French..but let's not put too much info on her, don't wanna look like we're stalking her--Darksyde Never Again 09:16, 13 January 2008 (UTC)

Should be updated, she has 15k Studded Leather now. —The preceding unsigned comment was added by Darksyde Never Again (contribs) .

OMG, Gaile is moving up!...or she doesn't get to make gold out of thin air. Pity.

I ran into her in a really high Shing Jea district and tried to get a picture, but when I asked her to take her lion mask off this idiot wammo ran up and danced on her until she left. I did get one, but she's got the Lion Mask on for it. I suppose I could shop the head onto it...

Gaile is a Wiki-noob! See proof 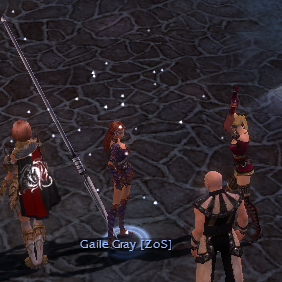 Everyone knows that she still plays the game; if you add her to friends list she pops in every now and then. But I am surprised that she is in a player-based guild. I seem to remember her saying one time how she had access to some codes for limited-edition miniatures, which she may one day give out as "rewards" for the good people of GWW. Hmm...

People from GWW are gonna get closed beta keys, we all know that.

Good thing we both have accounts there, eh? I guess I better hurry up and get promoted, then. ;)

I've only used my account there twice, and once was to post this screenshot on Gaile's talk page. XD

And I thought this vandal was gone. Not so, huh? Cress Arvein

Ehh, it's not like the fanfic is hard to find. Could easily be different people.