Too bad they took out the two quests (Establish the Kurzick Settlement & Establish the Luxon Settlement). I hadn't had all my characters do them yet. :( --Rainith 14:44, 30 March 2006 (CST)

K, servers were killed, now my life has a big void. :( Anyways, I figure they recognized that this could bea source of infinite Faction. Just create a character, have him run from Ascalon to Lion's Arch, then hire a Wammo to kill the Ettins (wh are already very farmable) and get 500 free faction. Since faction sticks on the account, not the character, delete the aforementioned character, rinse and repeat. The whole thing can be done in about 1 hour if you do it during peak running hours. --Karlos 16:03, 30 March 2006 (CST)

Well, if that was the reason, they better do some major changes to the repeatable quests in Factions, before the release (yes, I do expect them to do so anyway). Mainly Duel of the Houses for Kurzicks and Luxon Supply Lines (not 100% sure about the name) for Luxons. I was easily able to get 500 Factions in three minutes with the latter - that is without needing the help of other players or even a very special build. Just bring one random running skill, like Sprint or Dash, pick up the supply package, and run once across the Jade Sea... --84-175 (talk) 02:53, 31 March 2006 (CST)

Not sure where this goes, so I will put it here for now: 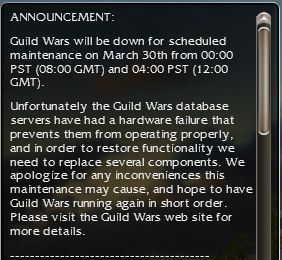