Difference between revisions of "Talk:Game updates/20061220"

There isn't a posting on the GW.com site right now, but Wintersday has arrived! And some other updates besides: The party finder is now accessible with 'P' as its hotkey; loading into a town (at least LA, AD2), I noticed in the upper left-hand corner there is an IP address, I believe it's for the town and district you're in (also works for guildhalls, probably for explorables and arenas as well). The new 'storage' rumored to show up is a hat replicator - for 10g, any hat you have on any character can be cloned for another character of yours *supposedly*. Verified that it will copy a hat, but the customization will apparently be for the character you're on. Also, a small performance indicator has appeared - it lists FPS, current ping, average ping and server IP address. It flickers from green, yellow and red - this seems to be based on FPS (as mine falls like a rock then it turns red).

My guild's guildhall (Isle of Solitude) lost all NPCs besides the Guild Lord and Alliance transfer/battle; I've also chatted with one person ingame who says theirs also had this problem, it was an Isle of Meditation guildhall. The guild lords both show that *none* of the NPCs were purchased even though the other person claimed theirs was fully optioned and mine was two away from that. Hearing reports from people with Imperial Isle, another Isle of Meditation, Isle of Weeping Stones, Warriors Isle,... I heard one person say their guildhall hadn't lost NPCs, but couldn't get them to PM me back saying what kind.--Corcis

The update shows by pressing F5. Sorry for the one who was a bit faster, but my version is much cleaner.

The hat replicator is true. Just show him a hat and he can replicate it to you later with 10g. Don't know if he can do it for all characters after showing the hat with one. --

No problem. :) I just tested the hat guy and he will make the hats for ANY of your characters once one of them has show it to him. Now I feel sooooooo bad that I missed this years halloween and the great witch hat. --

It will not work if the hat is not customized for the character who is showing it to the NPC. I just tried with hats customized for a different character on the same account and it did not work. --Rainith 02:02, 21 December 2006 (CST)

noway. that was the worst. No more free faction :( --Slogankid

In the bottom right hand corner a little red button shows the IP of the server, your ping and the Frames per second you get --DragonWR12LB 20:05, 20 December 2006 (CST)

Button is actually color coded in accordance to your ping with the server. This needs to be added to the interface page. --Dummey 20:07, 20 December 2006 (CST) 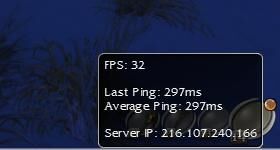 Game of the Year upgrade not in yet...

And nevermind, it's in the store now. Yay for extra /bonus items :)

Hmm, the update says it will be provided as a free upgrade to people who bought Prophecies from the online store...well, both my Prophecies accounts were bought there, and I don't seem to have gotten this upgrade...I tried /bonus, and all it gave me was the stuff from the Factions and Nightfall preorder keys...is there a different command for this, or has the upgrade for Prophecies players not been implemented yet?

Tabs in the Friend and Guild menus can now collapse. -- Actually, they have always been collapsable, they just changed the art from an arrow to the +/- signs. --Mwpeck 20:40, 20 December 2006 (CST)

Actually.... weren't the +/- thingies way pack in Prophecies? I hate them. hey completely DON'T fit the interface art style :( Hope they fix it (like the issue with the hourglasses) — Poki#3

Reconnect from the same computer...

You must reconnect from the same computer that you were playing on when the connection was lost. - Does that narrow down to "Have the same IP"? I hope not, because I and over 70% of Poland have Dynamic IP's :( Anyone care to conduct tests? — Poki#3

I haven't tested it, but my guess is that, when they say "same computer," they mean they store a piece of data locally. Likely, this piece of data is removed on a clean disconnect, so they can identify whether a disconnect was due to an error or whether it was intentional. --Herbal Tea 21:14, 20 December 2006 (CST)

They could use the computer's MAC ID for more reliable identification. I think the reason for this rule is to not allow people to "take shifts" at a hard mission, like person A plays for 3 hours, then "lags out" and lets person B continue where he left off.
In any case I'm SO friggin happy, believe it or not, it has been THREE times I lagged out on an Anguish mission, and TWO of these times were when the mission was 90% complete. Well, no more of that crap! 24.80.236.118 21:45, 20 December 2006 (CST)
You can spoof MAC addresses. --Theeth

You can spoof a IRL name, so what else is new --FireFox

Nothing, my point was that they'd be pretty stupid to use MAC addresses as unique identifier in an application. --Theeth

What exactly it is may need testing, but I don't care. I don't intend to abuse it, and am happy that I will be able to use it in a pinch. — Poki#3

This update is rubbish, I just lagged out of the Dragon's Throat mission, within 5 minutes I logged back in, went directly to the same character and found myself in the lobby area for the mission with my party leader asking me where I went. They were still fighting and I did not recieve any option to rejoin them. --DragonWR12LB 00:12, 21 December 2006 (CST)

Do not, EVER, shut down the client, either by pressing X or ctrl+alt+delling it... if you do you lose your chance to get back. If you lagout, WAIT for an error message to appear, then fix your internet problems, then click relogin. If GW is stuck or frozen, press reset on your computer, right now its the only way to make GW think a program has crashed and not been closed. Note: right now you cannot combine both, so if you get a message and THEN you press reset you are screwed. I have put up a fix suggestion here: http://www.guildwarsguru.com/forum/showthread.php?t=10093814

There are plenty of feasible, difficult to spoof means of having a crashed client securely identify itself that aren't MAC addresses or the ilk. If you've ever signed up for a mailing list that mails you a magic confirmation URL or code, you've seen one of the more common techniques already.--Grumpy 19:05, 21 December 2006 (CST)

i just got d/c from snowball fight and when it tried to reconnect it didnt work so it auto relogged back in and i went to same char and i got put in temple of balthazar. I was there maybe 1.30 mins max after it disconnected me -- Slogankid

I dont know about you, but when I went out to north kryta province and closed the client using ctrl+alt+del it gave me the reconnect message and brought me back--Ofer1992 07:56, 21 December 2006 (CST)

Did you end the program or the process? --Theeth

Process, and btw, i was in Snowball arena and got err7 and instead of returning me to the login screen the screen got black and i got a message do i want to reconnect. its pretty impressive.--Ofer1992 10:26, 21 December 2006 (CST)

Ending the process doesn't trying the end if program cleanup code, so it would bypass any check they might have added to differentiate real crashes from people closing the program on purpose. --Theeth

For the second part of this update, you can no longer get Spiked Eggnog or Candy Cane Shards from Snowball fights after a loss. This is to prevent leeching.

I never got Candy Cane Shards from losing, and you still get CCS's for winning, so I dont know why CCS's were even mentioned in that line. --Mwpeck 12:36, 21 December 2006 (CST)

And this is why we can't have nice things. I thought getting a little something for losing was nice. --Sair