That's where they are in The Catacombs, I think if you check the Gargoyle page it states where in the catacombs they are located. --Rainith 09:19, 11 Sep 2005 (EST)

Gargoyles are living statues shaped as hideous winged demons that rely on deception and illusion to prey on others.

The wings were off, but that was Rainith and I did not check (had been some time since I saw one back in september). :) Everything else is correct. I am putting it back:

I agree the GW gargoyles look hideous (only facially though), BUT not in the demonic way, more like the new-born baby way (again only the face). And new-born babies are NOT demons. 5-year-olds are, not the new borns. The GW Gargoyle look like new-borns, not 5-year-olds (the face...).
And honestly, the mythical/fictional gargoyles I have been aware of tend to either disguise themselves as statues or actually turn into statues (alternately, came alive from statues), and are melee attackers (and winged). Thus that 70% mesmer connection really doesn't convince me, in the sense that I don't really think gargoyles in other literature uses illusion (only deception via the statue disguise/transformation), and the GW gargoyle don't use deception in the disguise sense of other literature works. Of course that is from my limited contact of gargoyles of other literature, so I also looked it up on wikipedia (which I do not use as authoritative evidence, but as an above-average weighted reference).
In fiction, Gargoyles are typically depicted as a winged humanoid race with demonic features (generally horns, a tail, talons, and may or may not have a beak). Gargoyles can generally use their wings to fly or glide, and are often depicted as having a rocky hide, or being capable of turning into stone in one way or another, a reference to their structural roots.
So, the only thing we currently agree on about what GW gargoyles and "traditional" gargoyles have in common is that they are are hideous-looking humanoids. According to me, they do NOT look demonic (neither like GW demons nor "traditional" demons), no have wings, and I really don't think the GW gargoyle look anything like having rocky-hide. No ability to turn from/to stone statues (unless Ch2 gives the mesmers a new spell "Illusion of Statueness"), nor RESEMBLE any statues in the GW world (haven't checked this carefully, but willing to bet money... my 2 cents on it). According to wikipedia, well, the lack of accord, is about the use of illusion/deception (ie. wikipedia does not mention it as a typical feature of gargoyles), aside from the whole "Illusion of Statueness" thing. If that IS the only illusion/deception that "traditional" gargoyles employ, I see no point of trying to use that wording when all you mean is hexes (which is a very different form of illusion/deception).

Current proposed definiton: "Gargoyles are hideous-looking humanoids that rely on hexes to prey on others". -PanSola 22:23, 21 January 2006 (UTC)

At the expense of being, once again, painted as a malicious influence corrupting the otherwise peaceful atmosphere of the wiki, I will continue to fight for my point...
I don't understand this whole "They are hideous, but not demonic, they look more like babies" thing. I find babies absolutely beautiful. I find your reference odd, very personal and quite wrong.
I uploaded a close-up of their face... 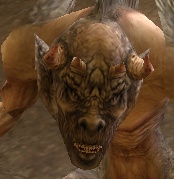 This IS a demonic face.. Long fangs, two sets of horns on their head, long point ears.
With regards to truning to stone. Go to pre-searing and go into the catacombs and watch the gargoyles. They will be perched, just like mythical gargoyles until you aggro them. And I think Rainith mistook the fins on their arms as wings.
So, on the demonic reference you are wrong, and on them not being like statues you are wrong. Even the mergoyles, when they stop, they perch just like mythical gargoyles. --Karlos 01:45, 22 January 2006 (UTC)

In my defense, I wrote that a while back and I don't remember exactly what I wrote or why, but I'll say Karlos is right, it was the fins. As for the ugly part, I've got to go with Karlos on that, the closest thing I can compare them to would be a vampire's face from Buffy the Vampire Slayer. I see no problems with they way they are currently described. --Rainith 01:55, 22 January 2006 (UTC)

Conversation necromancy ftw, but I feel it's relevant: During the Halloween event, a Transformed Elonian with the appearance of a Gargoyle says "When I awoke today, I had this irresistible urge to climb atop the buildings and enjoy the view. I can't seem to find a way up, though..." - this points to more of a connection between mythological gargoyles and those in GW, at least in the mind of whichever game designer thought up this quote. Tain 08:15, 1 November 2007 (UTC)