Karlos wrote: "I think you have the wrong lake?"

I got the info from the "Description" of Divinity Coast (outpost). I don't know where Talrath Stormcrush got that text from. Is it from an in-game source? --Tetris L 21:49, 29 Aug 2005 (EST)
I assume he got it from the description on the travel map ("M"). --Tetris L 22:15, 29 Aug 2005 (EST)
Note that Giant's Basin is also mentioned in the description of Beetletun. I'm pretty sure that Giant's Basin is the center one of the three big lakes north of Kryta and Maguuma.

I'm pretty sure that the game points at the eastern one of the three as Giant's Basin. Here is a screen cap I just took. If you take the road from Lion's Arch to the Ascalon Settlement, you will get to this fork in the road after you pass through the plain filled with Caromi Tengu patrols. If you look here you will see that at this fork, the sign points to the Ascalon settlement being NORTH and Giant's Basin being NORTH East (look at the character's compass). On the other hand, I cannot find any sign to "Giant's Basin" in the watchtower coast. The game's signs point at Giant's Basin being the eastern lake. --Karlos 17:40, 30 Aug 2005 (EST)

Hmmm ... lately I started talking to the NPCs some more to get background information. They got some interesting things to tell sometimes. I'll chat with NPCs in Ascalon Settlement, Beetletun and Watchtower/Divinity Coast. Maybe I can find out some more and clarify this question. --Tetris L 17:48, 30 Aug 2005 (EST)

I noticed yesterday that in the kick-off conversation of The Ascalon Settlement Damaris mentions that the Ascalon Settlement is "not far from the Giants Basin". This would support your interpretation that it's the eastern lake. Frankly, I don't know. --Tetris L 19:08, 23 Sep 2005 (EST)

I believe what happened is that the one who put the signs and wrote that dialog is different than the one who made the descriptions for those outposts. OR that those outposes were meant to be on the basin and were then moved. Either way, I am more comfortable with the basin being the eastern one for now. --Karlos 21:08, 23 Sep 2005 (EST)

Question. Whats to say that that whole area between the lakes wasn't underwater as well? What if it was one big lake, a single basin. But part of it dried up and now its two lakes. So Giants Basin could be the name of the whole area. And does the word Giant in Giant's Basin possibly refer to the Norn? They supposedly live in the Far Shiverpeaks, which are to the North of Tyria as we know it. Urock 00:51, 6 June 2007 (CDT)

Resetting indent. With regards to Damaris stating that the Ascalon Settlement isn't not far from Giants basin, more specifically she is stating that Giants Basin is the great salt water lake just beyond swamp. While this doesn't really help by itself you have to take into consideration that she is probably using them as guideposts towards finding the Ascalon Settlement. While one could easily just follow the arrow on their compass, she is suggesting one possible rout, and there are several, to get there. The other rout she hints as is through the Tengu. This evidence more strongly indicates that it is the eastern lake which is Giant's Basin when you take all other information into consideration. Plus you also have to consider that this is a salt lake that we're talking about. Salt lakes only form where there are no outlets. I dont remember exactly what the map looked like before the GWEN update that increased the size of the prophesies map. Since the update though it would seem that the middle lake in question isn't even a salt lake to begin with. With that in mind it should clearly be that the eastern lake is Giant's Basin. The only evidence that seems to counter it are the descriptions for Divinity Coast and Beetleton. Born to Mes 00:31, 3 December 2007 (UTC)

Ok, I just recently saw an old map and there was a time when the big center lake could have been a salt water lake. However the GW:EN update has eliminated that possibility, either by design, or by accident. Regardless, I'm going to make edits reflecting such. 24.169.152.185 12:08, 10 January 2008 (UTC)

Is the location still in doubt?[edit source]

I'm taking the liberty of removing the uncertainty from the article.

As I write this, I have a character standing at the signpost for Giant's Basin. From the center of North Kryta Province (NKP), the sign points nearly due East, about as far from Watchtower Coast as a sign can point. It points to the shortest path to the "lake" on the province's north border. (I'll add the screen shot as soon as I figure out how). 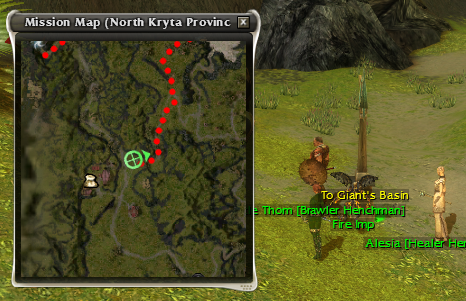 [Quoting last article edit] The exact location for Giant's Basin has been in dispute. In game content suggests that it could either be the lake north of North Kryta Province or the large lake north of Watchtower Coast and Divinity Coast. [/Quote]

It's vaguely possible that the name derives from the Enchanted Clay that drop Orrian Tablet Shards, who are located up the hill from the beach. But I think it's more likely that either the developers had something else in mind at one point or that, sometimes, a Giant's Basin is just a giant basin. --Tennessee Ernie Ford 00:20, 18 February 2009 (UTC)

FWIW, I found another set of signposts slightly NW of above. At the cross roads,

So, I now believe it's unambiguous within the game: Giant's Basin is the large body of water in the NE of N Kryta. (I'm happy to post the img if anyone still has doubts. --Tennessee Ernie Ford 22:46, 20 February 2009 (UTC)

I've always thought of the "Giants" referred are the Ettins in the area, who wash their faces in that lake when they are not beating up skales. -User:PanSola (talk to the

BTW, what makes you trust ingame signposts over ingame location descriptions? -User:PanSola (talk to the

I don't automatically (trust signs over dialog). However, I think it more likely that developers might forget to update dialog after an update (harder to find references) than miss the fixed-point items (like signposts) (easy to find/correct).
Also, I haven't seen a compelling case for the Watchtower location and I haven't myself seen the actual dialog or description used in support of the argument. (Where would I find the in-game description of Beetleton? It doesn't show on my map or on the signpost outside the village.)
So, I have no doubt that the location is not in doubt :-)
--Tennessee Ernie Ford 00:14, 21 February 2009 (UTC)

IMO, dialogs, which is pure text, is way easier to check/fix than the orientation/rotation of a particular minorly insignificant 3D model object placed in a particular zone. It also could be that due to enemies/weathers/traffic-jams at the point in time the signpost was installed, the physically shortest path may not be the optimal path when it mgiht be better to take a detour. The ingame description of Divinity Coast (outpost) states "...the Giant's Basin, the huge saltwater lake that defines the northern edge of the coast". -User:PanSola (talk to the

Well, if you are in California waiting for the arrival of enemies from across the Atlantic, you are expecting them to take over the East Coast and get to you by land. You wouldn't be building coastal watchtowers in California... -User:PanSola (talk to the

Fair point. Although, I might build "coastal" watchtowers on the east coast and east-facing watchtowers in the Sierras...so, I still wouldn't want to argue that the Beetletun reference is compelling. On the other hand, the Divinity Coast reference you quote is; I resign myself to the idea that somehow NCSoft left an easy-to-fix in-game contradiction for several years.

It's an iterative improvement, and while it might not be immediately obvious, it was built upon your work. Had anyone simply asked me to improve the article from the version before you touched it, I wouldn't have updated it this way. d-: -User:PanSola (talk to the

Yes, "coastal" watchtowers in the East Coast and East-facing watch towers on the Eastern side of California makes sense. But Watchtower Coast has watch towers facing North (unless it is meant to defend against land animals by the mermaids), on the northern borders (where the coast is) of the landmass. So your "I might" examples strengthen my case, by showing if Giant's Basin were not that lake, the watchtowers should have been built else were. -User:PanSola (talk to the

I took the liberty of rewriting the article. There may or may not be a justified dispute, but there is definitely contradictions within the game, and I wanted the contradiction to be clearly documented. I also try to carefully make clear what stuff are clearly stated, while what are "suggestions".

I think you handled the re-write adroitly (or agauchely, if you're left-handed). It has the requisite info, handles the contradictions deftly, and reads well). Nice work. :-)

How can I display the location descriptions in-game? Do they only show up the first time you visit a location? I have a char that can get to Beetletun...and I haven't found the watchtower reference. (As I mentioned, the signposts held more sway in part b/c I can see them and I have not (yet) seen the descrips.)

Click on the map marker of Beetletun, but do NOT travel to it. You shall find the ingame description near the button to travel there. (-: -User:PanSola (talk to the

Well, I wasn't assuming you were smart enough to map travel there in the first place. You could've stupidly walked there every time from Ascalon City!!! d-: -User:PanSola (talk to the

Is there anywhere, in-game or otherwise, where the term, Lesser Giant's Basin is used or implied? If not, I think we are better off just keeping it simple with West/East. And, if one is Lesser, why isn't the other Greater?  —Tennessee Ernie Ford (TEF) 01:20, July 20, 2010 (UTC)