Who says the Great Giants were preparing Tyria for the Old Gods? My gut feeling is that they are as "bad" as the Titans in ancient Greek Mythology. i.e. Ancient magnficent and powerful beings that preceded the Gods. But if there is a reference that they were there for the Gods, great! --Karlos 20:24, 9 Oct 2005 (EST)

All we know about them is one single line in the manual. Anything else is wild guessing, speculation, assumptions. My guess would be that the Giants created the world, and then left it, in a raw state. The Old Gods shaped it later. I don't think that the Giants worked under order of the Old Gods. I'd rather guess that they are even higher, more powerful beings that the Old Gods.

Giganticus Lupicus - Who came up with the weird pseudo-latin name anyway? I had latin in school for 5 years, and even though I can't say I learned much during that time, this is what I can say with the little bit that I grasped:
And last but not least (nothing to do with latin): Isn't Great Giant a tautology anyway? Are there any small giants?? --Tetris L 02:59, 10 Oct 2005 (EST)

My humble 5 minute research into Latin revealed that Lupus could also mean RAVENOUS FISH (evolotion anyone?). So, these guys could be big mean fish.
Also, your guess conflicts with the game. The monks and sages of the game always say the Old Gods made Tyria. So, I am taking that note out. That is complete speculation and there was no reason to put that there. --Karlos 16:42, 10 Oct 2005 (EST)

Im not sure where the reference to these giants is in the story, but couldnt they refer to those giant fish skeletons in the crystal desert? --Crusty 17:57, 28 December 2005 (UTC)

Maybe they're called the 'great giants' because the skeletons or ruins indicate that they were even bigger than the hill giants, sand giants and tundra giants of modern Tyria. With regards to the weird pseudo-latin, it's pretty common in fantasy, not everyone's Tolkien. As for Lupicus, it could be the name of the archaeologist who first discovered them or something. -- Gordon Ecker 23 November 2005

On the offivial page they are now jst called the Giants, maybe the article should be moved to the new name.

Or maybe Great is not meaning "big" but powerful, wonderful etc

On the name[edit source]

Someone in ANet apparently read this because in the Factions manual they translate the name as "the TRUE giants." --Karlos 05:11, 4 May 2006 (CDT)

Does anyone else think that they might be the Titans or the gods of the Titans? I'm thinking it's more likely that they're antagonists or allies in Nightfall or Campaign 4, but I'm not aware of anything thet rules out the Titan theory. -- Gordon Ecker 19:55, 21 August 2006 (CDT)

And the Titan theory has been ruled out. The Forgotten Wardens who offer the Titan Hunt bounty say that the Titans are nearly as old as the Forgotten, while the Great Giants are over three times as old as Glint. Actually it hasn't been completely ruled out, as the Forgotten may have been around for ages before they were summoned to Tyria. -- Gordon Ecker 16:50, 9 November 2006 (CST)

Fish from the northern lands[edit source]

My humble 5 minute research into Latin revealed that Lupus could also mean RAVENOUS FISH (evolotion anyone?). So, these guys could be big mean fish.

I think you amy be right. After all, giant's basin is a huge water sourse. add onto that the fact that Cantha traded with "Northern Lands" north of Tyria and you may have a new gw game plot. What droze the charr south? What were the watchtowers made for? Who are these mysteries and fishy giants? what of the dwarves and why do they not owrship the five gods? Who is the great dwarf?--68.192.188.142 20:51, 27 November 2006 (CST)

Well, if they are indeed fish-like, that would certainly explain their presence in the Crystal Desert, considering long ago it was an ocean, which they could have been swimming in. (the Margonites sailed there to seek ascension when only the tips of the highest dunes showed, unlike Turai Ossa, who trekked there across the desolation on foot.) Oh, and the Great Dwarf rules. Though I doubt he's one of the "five true gods." Although it does make me wonder how they're such "true gods" considering how easily they can be replaced and/or killed. Forgot to log-in before sign. Shas'o Kauyon 12:38, 5 March 2007 (CST)

If what 74.112.104.252 says is correct, then the dwarves could be meant to represent ChristiansJews.
Abraham was a typical Babylonian until he was just leaving the lands of El, the war god. He had a vision where El appeared too him and told him that he was the only god so he should worship him alone. Or something like that, anyway. —

I am such an idiot: I meant to say Jews not Christians —

I've always thought those massive bones in the Crystal Desert had daunting similarities to the Leviathan. It's hard to get a good look at the Leviathan without dying, but it kind of looks as though they share the same tusk-like mandibles you would see on the giant bones in the desert. I mean, the Leviathans lived in the depths of the Jade Sea, so why not the Crystal Sea? Just food for though, perhaps there are Leviathans in Giant's Basin though I doubt it as the lakes are too small. Gravemind 08:14, 11 July 2007 (CDT)

Also, according to Tetris Giganticus Lupicus means Gigantic Wolf, and the norns are supposed to be bear like. Bears and wolves are both canines arent they? pretty close evolution-wise. Maybe the norns are decendants of the Great Giants. They live in the far shiverpeaks, which, according to all our maps, is going to be pretty close to Giant's Basin in Kryta, supposedly named after the Great Giants. O.o --MarinBloodbane 07:51, 11 July 2007 (CDT)

Especially if you look over the updated Tyria map, as above those three lakes in Kryta there is an actual basin/delta and it is extremely close to what I would guess is Norn Territory. I would also guess the people that invaded Kyrta and forced them to build the watchtowers were actually the Norn.--68.192.188.142 09:22, 19 July 2007 (CDT)

Err i think that would have been mentioned. People who invaded Kryta: Ascalon and Orr during the guild wars (only small skirmishes). The charr in a full army but got owned by spectral agony.

Okies, this is way late, but whatever. First of all, bears are most certainly NOT canines. Second, Tetris did not say it meant "Gigantic Wolf", but that Lupicus in general normally refers to wolves -- note that in the same paragraph he is pointing out that the Latin is completely bogus anyway. Third, people who invaded Kryta and forced them to build the watchtowers? Huh? Finally, there are a LOT of oversized creatures in Guild Wars, and it's just as likely that the Norn are related to the ancient Great Giants as Hill Giants are. This is a fantasy game, and as such includes many many giant creatures. The Norn are also neither ancient nor god-like. There is almost certainly no descendent relationship between the Norn and the Great Giants.
Sorry for the rant. :) Peace! Ailina 21:02, September 3, 2010 (UTC)

Hi this hasn't been brought up here and it's pure speculation, but speculation based on observation.

"The giant skeletons located throughout the Desolation, Crystal Desert, Ascalon, Shiverpeak Mountains, Charr Homelands, and Tarnished Coast are suspected to be the remains of the Giganticus Lupicus."

This is believed to be these:

Many refer to these as fish bones, and this would make sense that they would be fish bones seeing as we know that the Crystal Desert was once an ocean. However, I don't think they are fish bones in the slightest, to me they look more like serpents. The term Giganticus Lupicus CANNOT translate to Ravenous Fish. Ravenous Fish is Pisces rapaces. Giganticus Lupicus can only mean one thing, and that is Gigantic Wolf. So that's possibly the answer, we are looking for Giant Wolf bones. No? Because I've never seen them. So maybe we can assume that the name was not chosen because it was a latin translation, but instead was just a cool sounding name. The only bones that we can properly associate to the "True Giants" is the bone we have in the above picture.

So lets go from what they look like rather than what they should look like based on the obviously misdirectional name.

Big serpents, older than the Forgotten ones. Some speculated that they were the first race on the face of the world, maybe even the ones that formed the world (not necessarily built the world, but formed the lay of the land). A lot of this information was given like hints, with no detail, almost as if it was going to have some significance, maybe in an other chapter of the game.

It took me less than 5 minutes to go through the concept art for GW:Utopia, before I found this: 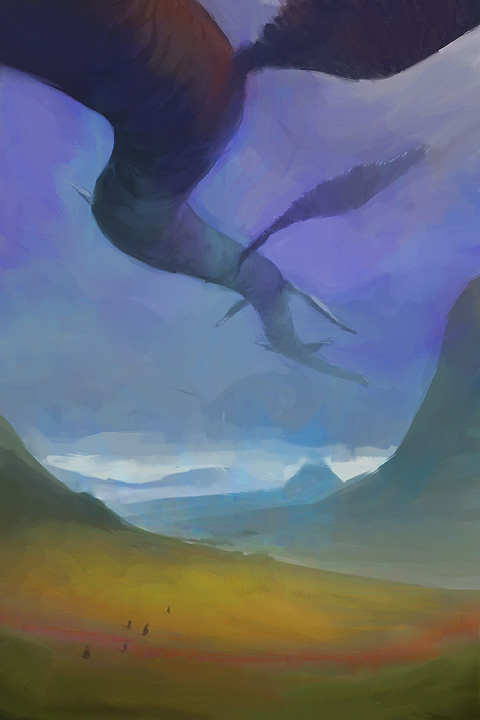 In Guild Wars Utopia, the emphasis was going to be on Aztec-Mayan looking culture. So lets mix and mangle the belief systems of the other real Life peoples from the Pre-colony Americas. The Mayans believed in the Feathered Serpent God Quetzalcoatl. The Mayan, Aztec and Toltec religions speak of the Giants. Ancient beings that some hold to have been the builders of their pyramids, and others believe is what the Mayan Calendar is counting down to.

So I put it to you that the True Giants are indeed these giant "fish bones" and are also the creature that is depicted int hat concept artwork. Whether the race that was to be revealed in GW:Utopia were going to be praising or fearing the True Giants, it seems logical that these things link together and maybe there was a single survivor of the giants, that would some how feature in the story of GW:Utopia.

I'm only showing you what I have discovered, it's up to you to make your own decisions on this vague and flexible topic, but for me I'm convinced that the True Giants, who ever they were, whatever they did, what ever their motivations, they were these flying serpents.

Nice job! I think that by now, A-net won't do anything anymore with these guys. They were some initial cool lore, but they seem to be replaced by the ancient dragons in their role of "older than the gods"... Shame. (Or perhaps we'll end up ressurecting one/some to fight the dragons? That'd be awesome :D ) --