I think we can probably assume that, like the Grinning Recurve Bow, there is also one type of creature that drops them. Any idea what this creature might be? (Perhaps Terror Webs?) Zerris 14:24, 20 August 2006 (CDT)

Any idea how dyes effect it besides changing the whole shield...? I mean - Does Silver (for example) actually make it a true silver shade or is it very dark as black is the base color? Does the usual dye color come out as it's supposed to or does it dye as some off spectrum color? I know there is very limited info at this point but it's rare a shield is so dyeable as it claims and I think it should eventually be expanded on.--Vallen Frostweaver 07:44, 23 August 2006 (CDT)

I found a gloom sheild from HoH when i won.

When you say this are you meaning the Ruins of the Tomb of the Primeval Kings or PvP Hall of Heroes? I'm assuming you mean the PvP HoH.--Vallen Frostweaver 12:52, 23 August 2006 (CDT)

A Mindblade Spectre just dropped a gold Gloom Shield for me in UW. You can see in the drop log that this was indeed a drop. Proof that you can find thse from monster drops, not just shields. Can someone help me cut it down to size? 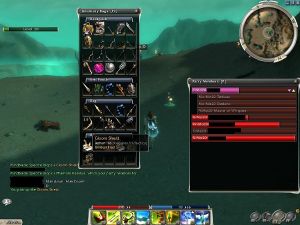 I wasn't too sure what you mean by cutting it down to size, so I just stuck it in a thumbnail - hope that works for you. ~

I also got one from a Mindblade Spectre, but it requires 13 strength, I wonder if they have a higher drop rate. Necrotic Armageddon

I had a gold insribable req 10 tactics one drop from a curse of darkness while gem farming in Ravenheart Gloom.

It drops in City of Torc'qua and I guess in The Foundry as well. Got one inscribable from Margonite Anur Ruk :). Can provide a screenshot if anyone cares.Metatail 12:06, 23 May 2007 (CDT)

I just had one drop from the murakai chest at the end of the cathedral of flames dungeon (inscribable) I got one out of the chest after beating Cyndr, Mountain Heart. requirement in stength.

True, they're not that rare. IMO they're the best skinned shield though.

Who came up with that weird 'inscribable' and 'non-indescribable' sections? As if anything ever dropped in the uw had an inscription slot. --Birchwooda Treehug 19:53, 19 September 2007 (CDT)

IIrc, the Underworld Chest at the end of all the quests can spawn inscribable thingies.

I've just got one from Havok's chest, I guess this should be added.

Or better yet, make the page neater, and remove either the dungeons-reward chests, or the list of dungeons. Thoughts? seems pointless to have both mistook that, didn't see it as a category. Bad soles 05:33, 4 January 2009 (UTC)