Talk:Guide to evolving a pet

Doesn't seems like the best way. When I LvL a pet in about 15 min or so. But using a 55 necro sac him self and let him be rezed. And above all never take monks there way to slow. See: Here --

I was actually already writing up a guide for that method, so here it is. A fast-casting mesmer makes it a LOT faster than monks. —Dr Ishmael

I think this guide pretty much makes that article obsolete, since you'll get the dire version unlocked anyway, and the vampiric weapon method is MUCH quicker than waiting for the stupid animal to kill you 300 times. With the addition of the Menagerie, there's no longer any reason to level your pet anywhere else. —Dr Ishmael

There are currently three guides with similar intent:
Is there any reason why we should not merge all three?   — Tennessee Ernie Ford (TEF) 17:38, December 27, 2009 (UTC)

I didn't even know the second one existed. It's basically the same as this guide, except: 1) it's pre-Menagerie, so it's written with a focus on DLing in explorable areas; 1a) there are some pets you simply can't DL in explorables, White Moa etc; 2) it recommends 2 resmer heroes fueled by a Well of Power necro, which really wouldn't be any more efficient than the setup here (my Norgu-rezmer never ran out of energy and only rarely had to wait on recharge (because he was stupid and didn't maintain Mantra of Recovery)).
Thus, I still think that this guide supersedes both of those. There might be some info from the "dire pet" guide that we could retain here, but honestly, the Menagerie has made pet training so darn quick and easy that I can't think of any reason to go in-depth on other methods of leveling pets. —Dr Ishmael

For reasons that I cannot entirely understand, there are peeps that don't like dealing with the menagerie (Purists? not sure). So, it's not entirely crazy to have a note mentioning that one can evolve pets by careful combat or DL in the wild. Going into amazing detail? I agree, seems unnecessary. The reason I posted "merge" instead of simply suggesting we delete the articles is that they seem to contain some information or data not avail in the current DL guide. So, I figure at least 1-2 contributors should review to make sure we don't lose any babies with the bathwater.   — Tennessee Ernie Ford (TEF) 07:11, December 28, 2009 (UTC)

Well, I'm not sure if I like this title for the merged article. I might be more comfortable with, say, "Guide to pet leveling" or "Guide to evolving a pet". I dunno, just throwing some ideas out there. Oh, and I prefer throwing in a BiP nec to keep the mesmers energy up (to get nec to use self-heals, removed weapon and set target as [aggressive] pet) --JonTheMon 15:08, December 28, 2009 (UTC)

Title can be changed, sure.
This guide does have a BiP necro, and he does use Healing Breeze on himself (even with a staff equipped and no target). —Dr Ishmael

Huh, maybe I should have tried more self-healing skills. I just used Mystic Regeneration and Vital Boon, and he wouldn't use them w/o the pet being targetted. --JonTheMon 15:38, December 28, 2009 (UTC)

I got these builds from Birchwooda's post here. I'm not really sure why Healing Breeze would be treated different from Mystic Regen, though. —Dr Ishmael

For some reason, unless the critter is doing damage to me, I always end up with an elder pet. I've tried it both with auto-die (HP<1 when rez'ed) and with a few HP and the vampiric weapon doing most of the damage. Pet was elder 4 times now. I managed my equipment so I would rez with > 1 HP and let the animal peck me to death and I was back to dire.

Editing tip: Please sign your comments by typing four tildes (~~~~) after your comment.
What gives is that you were "aggroing" the animal by using Charm Animal and canceling it, weren't you? I didn't think about this before, but I had always aggroed by attacking. By doing that, I was actually tipping the animals damage received/dealt ratio towards the hearty side. But if you charm to aggro, the animal's damage ratio is staying at zero, and it will become elder. It's obvious in hindsight, of course. I'll fix the guide. —Dr Ishmael

Thanks. ^_^ Glad it's working for you! —Dr Ishmael 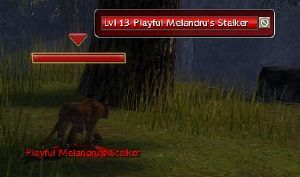 I stumbled across this one by accident. I was death leveling the reef lurker and white crab at the same time, and after I charmed the reef lurker and brought it to Emyrd, I noticed that the crab was a Hearty White Crab when I came back. I decided to check again to verify, and here's what I found after I had moved out of targeting range of the Melandru's Stalker I was death-leveling and returned.

Nothing earth-shattering, but I thought it was interesting. Nwash

Indeed, interesting. Most people wouldn't think to level two animals at the same time like that, and you wouldn't normally walk away from the animal you're leveling, so it's not surprising that we didn't know about that. —Dr Ishmael

Vengeance should be removed[edit source]

As it makes this much slower than it should be. Pets don't receive any XP when you die after being resurrected by Vengeance (I've tested this).

Additionally, the necro hero seems unnecessary - 2 rezmers with simple Resurrect and Resurrection Chant (or similar, and possibly a heal, for when you're done and want to charm) are faster again. BiP is needed after all! Silly me. >.<

Why 12 Healing on the rezmers? As you noted, that makes Restore Life put you at 1 HP instead of 0, so it adds a half-second delay there. Seems to me that 0 Healing would be quicker. —Dr Ishmael

It's not really necessary, it just makes it easier (more chances) to swap to your other weapon set when the animal moves (some of them wander a lot) or when you're ready to charm. I've also got my heroes using 40/40 Healing Prayers sets, which I think (haven't actually timed it both ways) more than offsets the 1/2 second on Restore. :P Additionally, it gives enough energy to charm immediately when you're done (not really an issue with the BiP, but still).
Also, it's certainly better with just the one Mes build (as it's duplicated), but why the reversion on the capitalization of Mesmer? It seems proper to capitalize, as per this page. ~ Bekkr 02:55, January 6, 2010 (UTC)

The level 5 animals roaming out the Menagerie never attack. Look at the article more closely; that doesn't prevent you from death leveling them. Nwash

Yes, you can. I hadn't thought of doing that. Try it out and let us know how it goes. —Dr Ishmael

Currently I am 1 hour into the process using two monks with Ressurect (hero doesnt have a vamp weapon). Targeting the Phoenix still shows a lvl 5 creature. I know this is much slower than the process described, but shouldnt I at least see a lvl 6 Phoenix by now?--Ascalon Destroyer 15:33, March 30, 2010 (UTC)

I just checked some old talk pages, and it was actually mentioned here that heroes only give XP the first time they die. So I guess that won't work.
If you can afford an extra character slot (or delete one of your existing characters), you can just create a PvP character for this, that's what I did. —Dr Ishmael