The Halloween 2006 Event is special holiday event. The special item is a Pumpkin Helmet, which will be available on October 31, 2006.

How do you know this? I swear I read Gaile Grey say that they won't offer older types of helmets as its a symbol of how long a character has been in the game. I want a Jason Voorhees type hockey mask :) --SK

Gaile said specifically that it wouldn't be a pumpkin head. Someone is wrong, and I'm betting Gaile knows more.

Where did Gaile say it wouldn't be a pumkin crown? If they do not repeat last years thing (and maybe add a new one too) it really sucks. I've been playing since day 1 but was busy at school and missed the event by a few hours. Would be nice if I had the opportunity to get one now. Too bad they are customized or I would have purchased / traded for one. -- Stexe

I'm not very good at writing parts of articles, but some raw data for someone who knows how to write up:

Yay! I have over 100 charr carvings XD

As on the ffical event page. Does anyone know what it is and if it is avalible?

From what I can tell its not advailable yet. Ive been doing a bit of asking around and turned up nothing. I belive they may be puting it off till later on in the event. ~ Zero rogue x 02:28, 29 October 2006 (CST)

Isnt it kinda unfair? They made factions standalone expansion (like Nightfall) yet they dont get to have halloween event. : Amilo Robin

Prophecies only owners didn't get to experience the Day of the Tengu or the Dragon Festival. Life isn't fair, get over it. --Rainith 18:33, 28 October 2006 (CDT)

ArenaNet has only said that you shouldn't have to own all chapters to be competitive, and this is all non-game affecting items. Even ArenaNet wants to give their customers benefits for purchasing their products, and I think it's as simple as that. I can't really blame them for doing that either. -- 213.113.67.156 20:35, 28 October 2006 (CDT)

Also, from an extremely practical point of view, there were already Halloween decorations for Lion's Arch. The devs would have had to create a new skin for the Monestery or another Canthan place in order to have an event there. - Lord Ehzed 21:46, 28 October 2006 (CDT)

Factions was a flop, many players hated it compared tot he other two games and anet has already disowned it. That's why the jammed in all those action-only weekend events, the Dragon fest and the Day of the Teng. Did proph owners get to expirence any of those? No. Did peopople that got Factions get mroe skills avalible to them? Yes. I think the entire Factions gae not only sucked but was unfair to those who only owned chapter one. I for one am happy it was left in the dust, maybe chapter 1 will finnally stop being neglected now that Factions is.

Prepare to be upset then. I think the only reason that Halloween and Wintersday will be in Tyria is because they already have the code for them. Most new events will be for Elona. --Rainith 02:49, 29 October 2006 (CST)

It makes logical sense both for the game and for revenue to make different events unqiue to each country. There is no Asian Halloween, maybe, but there's a dragon festival, then maybe there's no wintersday in Elona (doubtful), because it uh, doesn't snow there. etc etc etc. It could be that they will focus only on new capmpaigns, but I personally think different campaigns will have their own festivals, and some that share. --Silk Weaker 04:36, 29 October 2006 (CST)

But there is snow in Shing Jea, and they have some holydays in there days in some asian countries, in Japan they buy a cake and give gifts. Mithran 04:38, 30 October 2006 (CST)

Wanted to add that the day of the tengu was a small event only availible to people who preordered the game and was not a very large event. Factions should get another large event other than the dragon festival. Prophecies gets 2 large, why can't factions?Kharn 17:19, 30 October 2006 (CST)

Read: the code for halloween in tyria is the same as last year with little change. They just added that because it was easy to do. — Skuld 04:18, 31 October 2006 (CST)

Kamadan's Horseman Garthrim is selling the Transmogrifier tonic, which has the same skin as the mystery item. info on this new item ? SmegEd 03:09, 29 October 2006 (CST)

Well, I just added a dash, since that allows the word to be split over multiple rules, if anyone has a problem with this solution, feel free to change it mer 09:01, 31 October 2006 (CST)

Not sure if anyone noticed this but.. There's someone buried beneath the grass in LA! Run around on the grass between the Merchants and Horseman Vulgamor. If you step on him, he tells you off! Hilarious stuff! 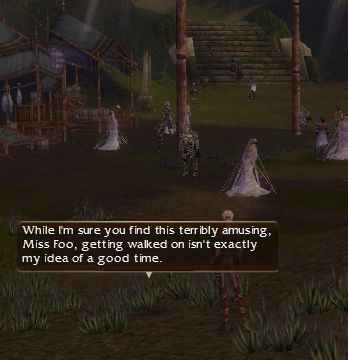