There are two skins of the normal Highlander Blade. One has a straight guard and short hilt, the other has the guard tilted back and a longer hilt and blade. The one on the dye preview shot is the longer version with the tilted guards. I've got both, I'll get them tomorrow unless I forget.

Since I've got both swords now I could compare. So it's not _much_ smaller... the size difference is actually very little. The greater one has a larger grip and the thingie between grip and blade is larger and different direction. 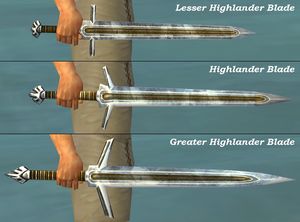 Lol I love the comment in the notes, briliant!

Am i the only one who thinks this sword looks like the ordon sword from Legend of Zelda: Twilight Princess?Darhk 20:38, 25 September 2007 (CDT)darhk