what is that strange looking part near the north west after the beach looking aera? it has some werid floating stuff --Chessyang 00:19, 13 December 2006 (CST)

we don't have a section for the blessings/bounty

Yes we do. Look under Blessings I think.

Is that Moonflow trivia really necessary? Sure it looks similar, but it seems to be a pretty baseless claim. --Emelend 02:39, 22 April 2007 (CDT)

I noticed the hanging carpets in the Halls of Chokhin have scrolling texts just like the green on black in The Matrix. 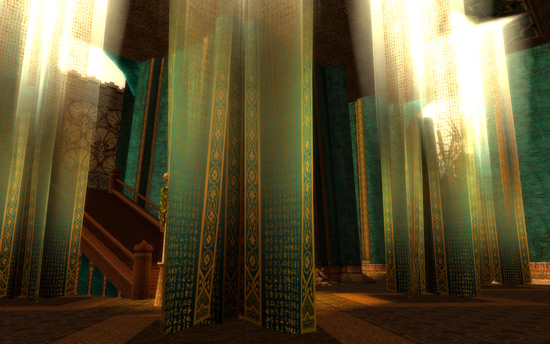 I removed the note about it, because it doesn't look anything like the Matrix text other than the downward motion. Oh, and INAFR. —Dr Ishmael

Nonsense, all scrolling text is a matrix reference!

I recently completed the second quest of the chain quest regarding Kachok and the other guy who's name can't remember. Decided to do it in HM so that when I would get the reward, I would have achieved max LB rank, but in HM, whcih is kinda what makes me feel better. Now I see there's another quest, which this same wiki describes as difficult. I don't have the balls to do it in HM and being wiped once and another time to finally fail it, didn't even brought LB's gaze, but I'm pretty sure numbers would go up much higher with this quest active and the previous one. Anyone ever did it like this? (both quests in HM). --Alf's Hitman 20:35, 5 August 2008 (UTC)