In case I don't get to this quest before the weekend ends, could someone double check the name. The Kurzick version is In the Army Now (Kurzick), note the addition of the word Now. --Rainith 12:36, 26 March 2006 (CST)

Say I grab all 4 recruits, take them back to the recruiter and then go get the other 4, without accepting the completed quest, would that work per say? --Warcobra 19:51, 13 June 2006 (CST)

Just a note to say that the bug doesnt appear to have been fixed, as i just tried this for the first time, one recruit died, and the quest log still said i had gained enough recruits, though i couldnt complete it because i hadnt. Gawa 14:04, 20 July 2007 (CDT) 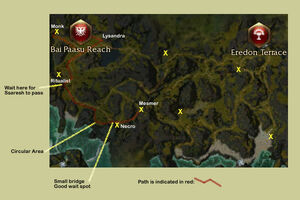 This quest is the only repeatable Luxon quest which I could run solo without time-consuming fighting. The designers seem to have intended for people to do this since the timing of the patrolling mobs is ideal for a solo run. They even put in a couple of bosses which automatically fight each other so you can capture a couple elites along the way without fighting. Just outside of the Bai Paasu Reach portal is the quest giver, Lysandra. In a curved path stretching to the SE from her are the four recruits closest to Bai Paasu Reach: Monk, Ritualist, Necro, and Mesmer. Not coincidentally, this quest can be run solo with little or no fighting. You need to acquire the farthest recruit (mesmer) first, and pick up the rest on the return to minimize waiting for the slow-moving recruits. Order to pick them up: Mesmer, Necro, Ritualist, Monk. You run the exact same path coming and going.

Although it's tempting to simply grab the recruits as you pass by them, don't, because if you do, not only would you spend twice as much time on the quest (waiting for the recruits to catch up), but the timing of the patrols is triggered by your approach on the path and is timed perfectly for a direct run straight to the farthest recruit first. Therefore, if you don't run directly to the mesmer at the end, you will (1) have to wait longer for the now out-of-sync mobs to patrol away, (2) undertake a proportionally higher risk of aggroing something by accident since the recruits have to run farther.

Just south of the resurrection shrine near the ritualist recruit, the Elder Guardian boss, Seacrash (Unsteady Ground), and some rot wallows stand idly. That mob is stationary and is easy to run past. However, patrolling just to the west of them is a small Naga mob which looks threatening, but if you don't delay and simply run straight down the path, they are timed so you will miss them. Just beyond Seacrash to the south is another boss, Ssaresh Rattler, and a few Naga companions. As you approach running south, Ssaresh's movement towards the northeast is triggered. Ultimately it will meet up with the other group of Nagas which you just passed. At this point move to the right (west) and hug the rock wall. It is the first place where you may actually need to stop running for a moment. While moving to join up with the other Nagas, Ssaresh's group will not aggro you if you pull up and wait there, where the path constricts. Once the Naga mobs converge, you can quickly run past them without fighting.

Soon after the Nagas converge, they will automatically begin fighting with Seacrash and his rot wallows. Usually Seacrash loses, so if you are an Ele, you may want to capture "Unsteady Ground" from him on the way back, if you don't already have it. About 30% of the time the Nagas lose, in which case, an Assassin may want to capture the elite from Ssaresh. Also, if you were sloppy with your aggro skills running down the path and happened to snag the patrolling Naga mob, you can easily lose them by running near Seacrash, as the Elder Guardian and his minions are more willing combatants than you and will always draw the Nagas into battle. Just be sure Seacrash aggros a Naga first, not you. Note: even though you do not fight, you still get the morale boost when one of the bosses die.

Just past the fighting Naga and Guardian bosses, you will see the terrain borders go from irregular to circular. Right in the middle of that circle are a group of Rot wallows. Circular, eh? Run around them. Just beyond them is a small bridge. If you didn't run straight though as I advised, you may have to wait for the patrolling Nagas just beyond the bridge to move out of aggro distance. Continue up the hill (on the path not patrolled by the Nagas) to the mesmer recruit, and grab him. Run back the way you came. If you did all of this without hesitation, the timing is perfect for a return trip without any wait. If your run got out of sync, though, wait for patrolling Nagas to leave. Grab the Necro recruit at the bridge, and wait in the middle of the small bridge for the mesmer recruit to catch up. If you have been running this correctly, this would be the only other stop up to this point.

At this point of the return trip, I have seen some minor differences in patrols, but the bridge is a safe place to wait, so if need be, you can easily observe the pathing of the mobs and avoid them. Sometimes I run the exact path back through the "circular" area, and at other times, on the other side of the circle depending on where the rot wallows and Nagas are. It is not too difficult to figure out. Since you have to wait for the mesmer to catch up anyway, you have a moment to observe the patrol timing.

Once you clear the circular area, continue retracing your steps past the carnage of the fight between Seacrash and Ssaresh. The remaining surviors are stationary and easy to run by. Get the Ritualist recruit. The last recruit is the monk, and there is another trick the game plays on the unwary...

Depending on how you approach the monk, your approach will trigger either a single combatant, or three, or none. Obviously, if you are running this solo, you would rather fight one (or none) rather than three, since the recruits only fight with impressive looking starter swords and will likely die if you are soloing with just them. Here is the secret: as you enter the compound where the monk is, stay to the right (the side where the monk and collector is). If you wander around on the left side of the compound (south) you will always trigger 3 combatants. Stay to the right (north), and you will only trigger one combatant. The single combatant spawn will be either a warrior, ranger, or assassin. Although the recruits are weak, with your help they can survive the single combatant which spawns near the monk recruit. Just be sure to carry a heal and a decent offensive spell or two, and you will be ok. Of course, if you are truly the aggro wiz you think you are, then go straight down the middle to the far side and you will not spawn any ambushers. Just be sure to properly herd the recruits along the same path though. And back. I personally find it less time-consuming, though, to just stay to the right and deal with the one combatant ambush option.

Run a wide path back to Lysandra and do not approach the Bai Paasu portal, since there is another ambush spawn there also (a single assassin). As you wait near Lysandra, the recruits will automatically follow you, trigger the quest end and disappear into the portal. Now you can get your rewards. Map back into Bai Paasu and repeat. Solo.

Note: Since the characters I have run this with had heal spells, you may need to drag the single Kursick ambusher to the healers by the resurrection platform if your character can not heal or kill quickly. Just be sure to avoid the trigger for the larger ambush spawn on the south side of the compound where the monk is.

NPC weaponry is randomised. You can still wield weapons without being that profession. Lord of all tyria 15:59, 13 July 2007 (CDT)

i've recently done this quest. i had already recruited 4 henchies, one got killed, and i simply recruited another ( a mesmer, that didn't join when i had 4 other npcs before ) —

Agreed, I got wiped this afternoon, and had no problems getting more recruits. I'd say it got fixed. Removing the bug from the main page. ScionOfErixalimar 16:34, 23 February 2008 (UTC)

Saw this section after adding the following comment under the Bug heading above, I thought it was more appropriate here:

The main reason for doing this repeatable quest solo is that it can be completed much faster than with any group. Because the mob timing is so close, any group larger than 1 or 2 will likely aggro something. Plus you don't waste time fighting. Doing this solo is by far the fastest way that I have found to fill in the missing 3000-4000 Luxon faction points for the "Befriending the Luxons" quest.

If you have not already discovered, unlike the Kurzick quests, the non-repeatable Luxon quests do not provide enough points to fulfill the "Befriending" quest quota of 10,000 points. I think after all the non-repeatable quests are finished you only have about 6500 Luxon faction points. Doing this repeatable quest solo seems to be the quickest and least painful way of reaching the "Befriending" quest goal. -- Rpger, 3/24/3008

I think you rack up a bit more then 6.5k with the non-repeatables... hmm, but I don't know anymore. Thinking back, I think I used multiple characters to befriend the Luxons.
Oh, and how awesome! The previous comment is from today, a thousand years in the future! Nice to see Guild Wars is still around then. :D --

Yeah, ok...I know, it is only 2008, but chances are in 3008 they still will not have fixed the Luxon faction point shortfall problem. So it's all good. ;) Also, although you could use multiple characters to increment the total Luxon faction, it means you would have to stop one character's progress to advance another, - basically meaning you are repeating stuff anyway. You might as well just repeat it with just one character and get it through. -- Rpger

Over 9k faction to be earned from quests.
...6.5k faction towards Befriending the Luxons. (the other quests are farther on.) So yep, you're right on the money. --

In The Navy... erm, I mean Army[edit source]

Anyone else thinks that the only reason that it says Army is to match the Kurzick quest In the Army Now. Also, due to the fact that the Luxons lost their sea turning their navy into their army, making this title point towards the Village People song. Firestorm10 03:31, 13 November 2008 (UTC)