I hate the name "Jade" and "The Jade do this" and "The Jades are all..." this is bad English. Can we find a better way of saying this info? I know people in the came call them jades for short, but we can do better.

I much prefer we either move this info into Mursaat, or into the pages of the Jade Armor and Jade Bow. I also certainly hope there will be no category:Jade.

I agree, they should either be in with the Mursaat, or in with Golems. I think we can keep Jade as their species, but really at best they should be a sub-category of one of those two. --Rainith 16:46, 8 Oct 2005 (EST)

Can someone check if they're golems with EoE? There's Jades and Siege Ice Golems in Iron Mines, although I'm not sure if they're close enough to be lured. -- Gordon Ecker 08:43, 28 February 2006 (CST)

I just stumbled across this. I'm glad the article hasn't been moved or deleted yet, because to me the Jade are a species separate from the Mursaat. They behave very different, e.g. they don't bleed and don't leave corpses, while the Mursaat do. I think they are golems animated by the mursaat as servants and guards, just like the Enchanted are the golems of the Forgotten. --

I haven't tested this with EoE myself, but I do believe that they're entirely different species for game purposes. Likewise, just in terms of the story and stuff, the Mursaat are ancient and powerful spellcasters and the Jade Armors and Bows are their artificial minions. If Forgotten and Enchanted get separate articles, so should Jade and Mursaat. --130.58 20:11, 28 February 2006 (CST)

In theory, I agree that Jade Constructs (I HATE the name "jades") should have a separate article from Mursaat, BUT...
a) They all have Spectral Agony, not just the Mursaat.
b) In the game, there is a reference that says "The Forgotten and their Enchanted" (one of the three priests in Elona Reach)thereby forever separating the two, but I have never seen a reference to the "Mursaat and their Jade Thingies."
c) I just did an EoE test. True enough, when killing the Jade Armors at the beginning of the Ring of Fire, the Mursaat Eles and Mesmers got dmg, and when killing the Forgotten Sages and Cursebearers in Elona Reach, the Enchanted did not get damage.
This is the same issue as Siege Ice Golems being Stone Summit, though racially they are golems, not Dwarves. --Karlos 21:21, 28 February 2006 (CST)

a) and b) are not very compelling arguments to me, but c) clearly is. Add the fact that they drop Mursaat Tokens and Garments. I'd still like to keep Jade as a separate article though, because of their very different look, their difference in name and their differences in being fleshy. As for species and categories, maybe we can make them a sub-category/species of Mursaat? I can't think of a better way to clean the mess.
As for the name, I don't mind to call them "The Jade(s)". I'm not even sure that "Jade" refers to the material Jade. They don't look like made of Jade at all. Jade may be a name here, not the material. --

With regards to the name, I think it's in reference to the Jade stone's toughness. It's one of the hardest stones around, not the green jade color. I do not like "Jade" because it's an abbreviation of their name. They are Jade Armors and Jade Bows, their plural should not be "Jades." Just like Red Fighter and Red Berserker would be grouped as "Red Warriors" not as "Reds." The "enchanted" are called so because the game calls them so, but these guys are never referred to as "jades." --Karlos 23:39, 28 February 2006 (CST)

It's okay for me to label something with an adjective, using it like a noun. (But I'm not a native speaker, so who am I to decide? ;)) Using your example of "red fighters", I believe it is not uncommon to use "the reds" when talking for example about a political party or a sports team. --

I reread the Manuscripts of GWP, and it says in the description of the Crystal Desert, the sands are actually small shards of Jade, and that the winds have carved them into Jade pieces. Could this prove that the mursaats had been to the Crystal Desert, animated Jade Armor and Jade Bows from the sands, got defeated by the forgotten, and went to Kryta to seek 'allies' to help them prevent the prophecies from fulfilling? This would also explain why enchanted is wearing mursaat armor. Just a wild guess though.--IcyShaker 08:15, 3 January 2007 (CST)

Ok, I reverted that "off" remark (again) because I think it goes AGAINST everything else in the game. I have not personally seen those "off" Jade armors/bows anywhere in the game. But I am sure ths user has. The conclusion I would draw is that it's a bug. Not that Jade Armors/Bows require Mursaat to "turn them on" (hmm, this sentence has very dangerous implications on the Mursaat). :) Look, the proof is easy, in that same mission, if you head to Leah Stone to get the bonus, you will have some Mursaat here and there. Take them out. You will be left with a group of Jade bows down the stairs, and two groups of Jade Bows on the top above the seal, then two Jade armors with the Seal, finally behind the sealed door will be a last group of Jade bows and then the seal where Leah is. ALL those are "turned on" by seeing your party and none of them need to see no stinking Mursaat to get turned on. :) Overall, you'll have to provide a lot more proof for this phenomenon that only you experienced before this information is credible. --Karlos 19:51, 7 November 2005 (EST)

Like almost all my edits; I am real late to the party, again. But in the Abbadon's Mouth, Mission After getting through the "Fort" (or whatever you want to call the first part) there is a lone Mursaat Monk and if you kill him before he reaches the next group of jade they will not move, attack, or use any skills. However if you do allow the Mursaat Monk to get to them they become like normal characters and attack you and all that jazz. I can say with quite certainty (15 runs to cap Stupid Soul Leech) that this occurs every single time. So I am inclined to believe that the Mursaat indeed do have to "turn on" the Jade armor, but more in a story line or lore manner and not really in game play.

So, it appears from the new Factions cinematic trailer that the color of the Jade Wind is a shimmering purple. A winking reference to how the Jade Armors and Bows were purple in GWP? — Stabber 04:07, 24 March 2006 (CST)

I'm going to split this article into two seperate ones. One for the item, one for the species. I don't think it's a major change so I'll just go ahead and do it :) — Biscuits (talk

From some observations of the heads of Jade bosses, I have seen some similarity to Abaddon's mask and head. The Jade bosses also have 6 eyes and around the same sort of head as Abaddon, but this doesnt make sense as the Mursaat work against the Lich and Abaddon in Prophecies. Maybe the Mursaat found the Jade somehow and used them as their constructs? This might explain how they are made of the same sort of stuff as Abaddons chains and have the same look. I have some screenshots if you would like me to post them.Blaargh 07:20, 26 April 2007 (CDT)

Here's the screenshot I took of Cairn the Relentless in Abaddon's Mouth. 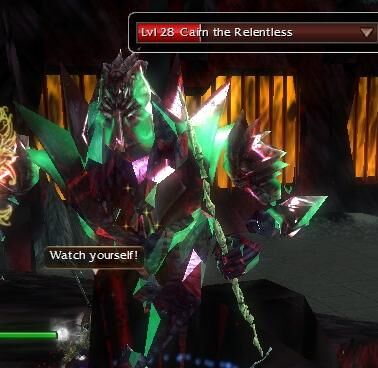