Yay, give up the pet I have had for years, or get this. I wonder what I am going to do? Screw that, this thing is nothing more than a Polar Bear with a collar around it's neck. I guess I can see some of the fotm tamers getting it, but it is still a reward aimed at /r. I guess if nothing else it is a form of showing off but since you can't see it in outposts it isn't even as good as a mini or a festival hat. Anyway good luck to those people that actually want this thing, it isn't hard to get, but the reward I guess is equal to the amount of work put in.

It's not all bad. It makes a jingley sound. You just have to set the effects volume up incredibly loudly, so that using a skill will deafen you. You also have to make sure your camera is within a couple feet of it. So, yeah, pretty much, it does suck. N Segick 02:06, 20 December 2008 (UTC)

She's good for people who aren't usually a ranger. I'm N/A by nature, and I switched to N/R to get the pet because I thought she was cute. But I'll probably only bring her out at the holidays for the special quests (I'd much rather be /A the rest of the year), and I'm certainly not ditching my ele's beloved Melandru's Stalker for it. Qing Guang 07:23, 21 December 2008 (UTC)

So, anyone bother to get one of these up to Lv20, and see what kind of statue it gives in the Hall? If it's a generic "Animal Companion" that's one thing, but a custom monument would be something else. Mujaki 04:21, 20 December 2008 (UTC)

Probably generic companion statue, but then again, Anet's put enough effort into this wintersday someone might have though of that and added it in. Unfortunately, Jingle Bear doesn't go hostile, so no death leveling.

yeah that kinda sucks, i wanted to death lvl one but w/e i got it anyways and im leveling in in HM on those frost wurms outside boreal station im just takin a bonder hero with life bond and life barrier and im using call of protection on it with various pet attacks such as poisonous bite, since the wurms still degen after they go underground. and im taking high dmging pet attacks such as enraged lunge and brutal strike while buffing it with my monk using strength and honor and i'm using great dwarf weapon and feral aggression, hopefully it evolves normally like other pets, and it will turn Dire.--24.216.121.135 17:18, 20 December 2008 (UTC)

See my talk page for it. Just got it to level 20 and went to HoM with it. No special statue. Also, the method i used has always gotten a hearty pet, but for some reason, my Jingle Bear didn't evolve. It remained Elder. So maybe this pet doesn't evolve at all, which seems likely as its a light green ally instead of a dark green ally when you find it, implying it's unique in some way.--Darksyde 05:30, 21 December 2008 (UTC)

The White Moa are also light-green (I call it yellow) and don't turn hostile, so it's not unique, at least. —Dr Ishmael

I swear i've seen white moas with dark green. Either way, i'm ditching this thing once i work up the patience to go for the phoenix statue.--Darksyde 07:08, 21 December 2008 (UTC) 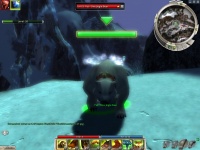 Re-indent! Darksyde, thanks for answering my original question of the statue. Just so you know, "Elder" is a final evolution, the balanced version between "Dire" and "Hearty." Mujaki 23:29, 21 December 2008 (UTC)

Yeah, i know what elder is, my jingle bear(level 20) doesn't have it in his name when i hit /namepet. Idk how you got dire, my method always gets hearty and mine has 480 health. But anyways, if you guys want to confuse some of the more gullible GW users, name this thing "Albino Panda" =P--Darksyde 07:15, 22 December 2008 (UTC)

Maybe you did something different that made it elder this one time. Or maybe your albino panda hates you.

Sometimes for some whatever reason pets don't get a final evolution. This was an annoying bug with the Phoenix HoM trophy. RoseOfKali

That would be the most likely scenario. Otherwise, as mentioned somewhere else (maybe on the Game updates talkpage), anyone who had "unlocked" it would be able to ferry people out there to charm it. —Dr Ishmael

Since festival quests always get reset every year, the logical conclusion is that have to complete them again to re-unlock the Jingle Bear. —Dr Ishmael

There will be a Wintersday 2009, and Halloween 2009, etc. It's very simple for Anet to "restart" a festival event. There probably won't be any new festival content after this (besides year-specific animal stuffs for Canthan New Year, most of which is already coded into the game), but I'd expect the current stuff to continue recurring until they shut down the servers. —Dr Ishmael

Unless they officially shut down all GW1 servers before then. However, I doubt Guild Wars will shut down that completely, they'll probably have a few running along GW2 for several years so people can grind titles for their future selves.

They've stated somewhere (Its probably on GW2W) that they intend to keep the servers up for people to play the original game. Roland Cyerni 02:28, 30 December 2008 (UTC)

I sure as hell hope so. D2 is still up after all these years. RoseOfKali

Well, there are plenty of other MMORPGs out there with solid competition on D2, so you don't need D3 to abandon D2, but thousands of people still play it. I'm guessing it won't be much different for GW1. RoseOfKali 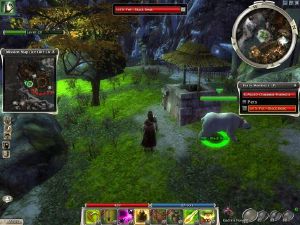 Reset indent. As of 6th Jan, with wintersday over (as in NPCs gone, quests etc unavailable) it is still tamable. I tamed mine directly after selling my Black Moa. The Jingle Bear kept the name of my moa, i.e. "Black Beek", I don't know whether this is a bug specific to the Jingle Bear or whether it happens with all newly charmed pets.Thalestis 11:00, 6 January 2009 (UTC)

That's not a bug - your customized pet name is always retained if you get a new pet. —Dr Ishmael

What happens when you try to add the Jingle Bear to the Menagerie? Does it actually count as one of the pets to have a "full" zoo - like, if one bought the pet unlock pack, does it come with it? Some people didn't bother with the Farmingsday quests to make it spawn, and so it will never be available to those people...but if it doesn't count towards a full menagerie anyway, I suppose it doesn't matter. Entropy

Well, I added mine, and it appears at the very top/back of the snowy hill, so I guess it does count to a "full zoo," as you put it. It appears as a Tyrian pet from Wynn. I think it is possible to charm them with a "run," as they still appear for me in Gwen's Garden. If you need one, try to catch me in game, we'll see if you can get it from my garden. And I'm sure they will be available again next Wintersday. If the garden trick doesn't work, and you just have to have one now, you can always just unlock it in-game. I don't think it's part or the unlock pack, being an "exotic" type animal. Even White Moa isn't included. RoseOfKali

Hmm. Considering that the Moss Spider costs "a nominal fee of" 50,000 Balth faction or 5 gold zoins, I think the unlock would be wtf astronomical for something supposedly one-time only. >_< I'll check around for garden tricks if you're not available... Entropy

Just like the US economy, my figures are inflated. Entropy

Yeah, you confused me there... I remembered clearly seeing 50 coins, so I made my post, but then it said 5, and I was like "Wait... I think I need to put down the booze... O_O" RoseOfKali

Wynn Only after Level 20[edit source] 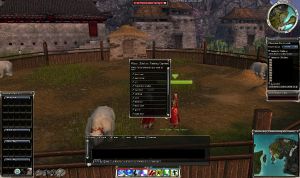 Sorry for the size

This screenshot doesn't prove anything other than the pet is available. Nothing about when it is or isn't available. And it really is huge... RoseOfKali

See my comment on Talk:White Jingle Moa#Wynn Only after Level 20. —Dr Ishmael