The fact that Kanaxai spawns Nightmares is further evidence for my theorie that Nightmares are a sub-species of Demons. --

I wouldn't base anything on him, he's a big unique boss — Skuld

On the elite mission weekend, I was able to still degen kanaxai's health by burning him with mark of rodgort, even do my other spells were doing 0 damage, has anyone else experienced this bug? —The preceding unsigned comment was added by Sefog (talk • contribs) 16:26, 5 August 2006 (CDT).

standard damage negation. degen from burning is not strictly damage. it's not a bug, in as much as it's illogical expected beheviour --Honorable Sarah

The article says Kanaxai is a boss. However I don't recall he is actually surrounded by an aura. Would be good to clarify whether or not Hexes/Conditions put on him have half their normal duration.

--only Tyrian bosses have halves condition and hex duration. Canthan bosses just do double damage and have double health... I think

maybe not techniqually (cant spell) but generally, if he drops green items (i know some stand mobs drop greens too) and is this uber powerful then i say he is most likely as good as a boss.

Also, i think he is neither assassin or warrior, tho he drops warrior items and wields like an assassin i dont think he can count as either without the skills.

He is not a boss, and so isn't Shiro, The Lich, Glint, Varesh, Kuunavang, Rotscale and Abaddon. They are something higher than a boss. I think bosses only go up to level 28. At level 29, 30, 31 we have these stronger creatures with no aura and with powerful monster skills. They should be called something else. But in any case, they aren't bosses. Boss in Guild Wars only implies on a creature with an aura of a single profession, later in the game being the only way to capture elites from, dead bosses. Ericdanie 00:48, 1 December 2006 (CST)

Should be noted that you cannot cap off Zhu Hanuku. Not only does the mission end upon his death, he carries no elite skill. So there's no way to know if you can cap off him for sure. Furthermore, in addition to monster skills, he also uses Resurrect, a monk skill, despite his mesmer aura. K-Starfire 07:02, 16 March 2007 (CDT)

I know it's rather late to be asking about a year-old article, but the statement "His primary class would most likely be Assassin, seeing as he can indeed duel-wield, and his secondary class, as mentioned, would be a warrior" seems wrong to me. Assassins can't "dual wield", they can use a pair of daggers. There's a big difference between that and Kanaxai wielding what look like two axes. I'm not saying that Kanaxai isn't an assassin, only that "dual wielding" is a bad reason to label him one. His relation to Oni and the use of Nightmare Refuge are far better reasons. I'm tempted to update the note a bit to deemphasize the notion that "dual wielding = assassin", but I wanted to get feedback first. — HarshLanguage

He's also not the only monster to have two classes. See Hoss Rainswell. --Ryard 22:40, 25 February 2007 (CST)
And Emperor Kisu has a better (yet still flimsy) claim to two professions. Three if you count his actual profession. -- Dashface

23:20, 25 February 2007 (CST)
I cleaned up the note considerably. Should be much clearer now, but still says the same thing. — HarshLanguage

Ever thought using Spoil Victor on him? He dual strikes, causing SV to activate 2 times. He will eventually kill himself with this. -X H K

Check the skill description. He can't kill himself with it. But that's just finnicky details. It's still a plausable application. --Foblove 07:00, 2 August 2007 (CDT)

I've been told that his name is pronounced "kanashi". Can anyone confirm this? And furthermore, has anyone done any research into the cultural context? I've heard that Kanaxai is a Japanese demon what is summoned whenever children misbehave. We really should research this. K-Starfire 06:58, 16 March 2007 (CDT)

FWIW "Kanaxai" is impossible in any of Japanese transliteration systems. So, unless it is alternative name for same being from other culture, it is not any kind of Japanese demon. --Rowaa[SR13] 02:40, 23 May 2007 (CDT)

Thanks, but we've already got a picture in the Miniature gallery. —

What level is Kanaxai in Hard Mode

not sure shiro is lv 33 check it 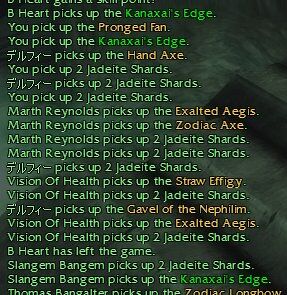 How do i know that? Kanaxai aspect dropped assassin tome i have screenshot.

Maybe, it's just a note. Most people have never seen it with their own eyes, I've only seen it twice and took a souvenir screenie the second time, in case anyone wondered how it looked. He's about thigh-high, so pretty tall.

Well if you just take a look at the minipet notes youll find out why. This is second to the mini Vizu, except this looks better. Meh.--Alcedo talk-cont 21:10, 2 March 2009 (UTC)

Look at the what notes to find out why what? And I believe you are wrong about Vizu, think closer to Polar Bear/Ghostly Hero, and Panda still beats all hands down. RoseOfKali

The tablet on the minipet page says theyre both promotional items for the orient, thus theyre almost on the same level of rarity (bar looks and size), but true, mini Polar Bear is also rare these days, and so is Panda. Ghostly not so...--Alcedo talk-cont 12:04, 3 March 2009 (UTC)

Well, in any case, Kanaxai IS the rarest mini in the game by a long shot: no more than 29 of them were ever released to players, and a few were deleted back during the armbrace dupe, so it's unknown how many exactly are still left. No other even comes close in numbers OR prices. There were originally 56 Vizus, 136 Pandas and Island Guardians, 115 Zheds and Shirokens, 200 Rollerbeetles, Yeti/Naga/Oni/Grawl go over 1,000, and Ghostly/polar are virtually unlimited. So yes, "no more than 29 ever existed" I think I will put in the article to indicate just how friggin rare this one is. :P RoseOfKali

So the Candyman Guards beat him by a few units. RoseOfKali

I do not understand why he is an assassin... With the exception of the double strike skill, he has nothing from a assassin, not even his weapons. He being a warrior would be more logical... Or giving him unique dagger drop or something... --Jorre22225 12:32, March 22, 2010 (UTC)

He does have two weapons. And I think they did it to relate it some more to factions. And since Urgoz is some sort of ritualist (he indirectly uses Binding Chains). Fleshcrawler Soban 14:03, March 22, 2010 (UTC)