I can also confirm that the various Cult of Verata bosses and Verata were there. However, in the U shaped loop there was also a Hill Giant boss (orange color, warrior?) named Morg Deathbane (sp?). Maybe someone wants to check it out? --anon Oct 27 2006

Confirmed! I saw and fought him just now. I managed to get a screenshot, though it's not great. Will upload it tomorrow. Unfortunately, couldn't SoC Confirm because I was the wrong class (Morg is a Warrior). Entropy 04:31, 30 December 2006 (CST) 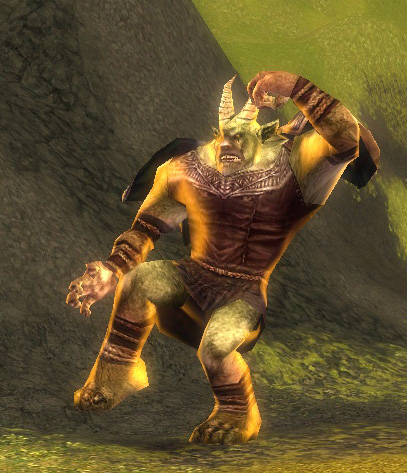 Created the monster page, but it does need a better pic. Mine was worse than Entropy's, as I didn't notice his back was to me when I took it. Guess I could use one of him laying dead on the ground. :P Queen Schmuck 23:59, 28 February 2007 (CST)

I did add a tip for vanquishing this area more easy.

Just vanquished this area. I tried a few times before with many different builds but was able to quite easily do it with 2 AoE Fire Elementalists, SV and a SS. Also, you can try to pick off some of the Verata from the hills and try to group them up in corners so that the eles can kill them off with their AoE. Just a tip for those of you who are trying to vanquish it. --Suicidal_SNiper 20:42, 29 March 2008 (UTC)

I found it to be useful to pull the large mobs from below the plateau, using Ebon Vanguard Sniper Support and Ebon Vanguard Assassin Support until they come around at you. They will stop about where the arrow head is in the image shown below, where you can kill them off one by one very easily. First step is to pull and kill off the stray groups that are not on the plateau (to the east and south), then go back about where the arrow head is and start killing things. I did this with only heroes and henchies (Me a Ranger, and the 3-necro build plus Alesia, Claude, Reyna and Orion), and virtually no consumables (a couple of clovers). GW-Susan 18:56, 24 October 2008 (UTC) 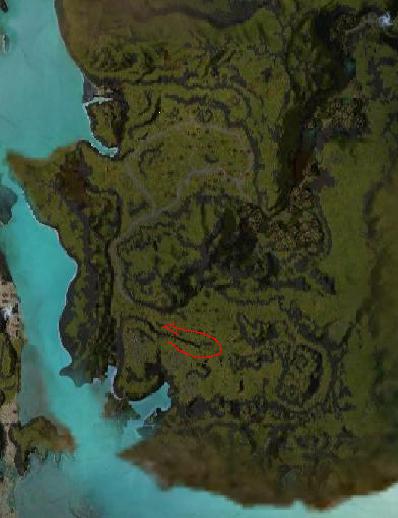 Can you really get stuck?[edit source]

One of the current notes suggests that you can get stuck in such a way that your only recourse is to use Rebirth or kill the party and resurrect. Can anyone confirm that, as of March 2009, this is still a problem? If so, does /stuck fail to help? And can we be more specific as to where this can happen? (Prevention is obviously better than the cure, which will be unavailable for many parties.)   — Tennessee Ernie Ford (TEF) 07:23, 13 March 2009 (UTC)

I was in this region about a week ago and experienced no such problem; there are "sticky" spots where the collision boundaries aren't defined very clearly, but nothing I got completely frozen in. Well, you do have to consider that I wasn't specifically looking for these things, either, I suppose. I'll check next time I'm in the area, if no one else does.

I've been through Kessex Peak at least eleven times, likely a lot more, for The Villainy of Galrath and other things. Never once have I gotten stuck anywhere in such a way that I needed rebirthing or such.
I just went and tested all the pools "near the entrance portal", as well as most of them until you reach the Fen Trolls. The only unusual thing I discovered is that the first few don't poison you. I was unable to get myself stuck anywhere.

My findings echo Entropy's. I didn't get stuck anywhere, even under the bridge. I tested this region, switchbacking and zigzagging like a crazed raccoon to find every angle I could.

Cool. Thanks for doing a double-check. I was there doing some serious scrapping and I never came close to getting stuck (well, not any worse than the usual run/stop/wiggle/run). Renian: thanks for removing the bug from the page.   — Tennessee Ernie Ford (TEF) 16:03, 13 March 2009 (UTC)

Should we be using something like {{Skill icon early}} here? I would think the article would be easier to read if those skills appeared near the bosses (none of whom carry an elite). Or do we prefer keeping the skills in their own section?   — Tennessee Ernie Ford (TEF) 18:58, November 15, 2009 (UTC)