I'm guessing that this 'water dragon' will be one of the massive dragons in GW2. After reading this: http://www.pcgamer.com/archives/2007/09/92407_-_ultimat.html it would make sense

In the first paragraph of this article (as currently written), we say this creature or object is neither mentioned in game nor in the manuals, that its "name" is taken from the filename of an image in the fansite kit, and that we don't even know if it's an Ancient Dragon or not (or even if it's a creature or just an object).

Then, rather abruptly at the start of the second paragraph, we suddenly become experts, not only sure of the existence of this creature, but capable of describing the details of the effects of its breath on things, and the part it plays in the history of the world. *sound of vertebrae in neck cracking from sudden speed change* Say what? Something is missing here. --68.187.144.197 12:49, 4 December 2007 (UTC)

Whoever wrote that part of the article is confusing this dragon with "the ice dragon" from the Shiverpeaks who flew over Ascalon and the Charr homelands and corrupted everything with it's breath.S0ndor 13:17, 4 December 2007 (UTC)

can some1 get a screenshot in? i dont know how and it would be cool if we could confirm it if were all looking at the same thing

Well, you can't really see the supposed Water Dragon, only these enormous spikes coming out of the ground. I'll see if I have an IG pic. --Shadowcrest 20:53, 4 January 2008 (UTC) 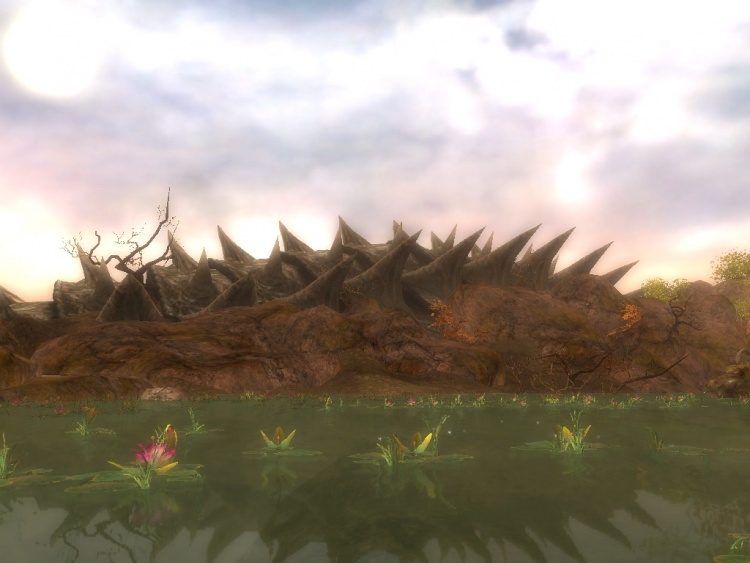 Honestly, though... to me that looks more like "plates" then "scales". Or even just exposed vertebrae with spikes coming out of them...

Remember, thats all purely speculative. BTW, i think i've found a sign. Primordus is surrounded by destroyers and the GD, Drakkar has a lot of wisps (djinn like creatures)floating above him as well as Myish, lady of the lake. And 'grothmar' here is surrounded by skales and a skale boss (forgotten his name). Is this a link between the the dragons?

Interesting enough, I've made similar note.. and also, u can see Ice Elementals and boss around that glowy statue/possible dragon in Ice Cliff Chasms

Monsters are probably drawn to their power, same way as Svanir and Asura in the Central Transfer Chamber. And there is always a boss (a powerful foe, if you get what I mean) near all three known or speculated dragons. Myish, Lady of the Lake is hanging at Drakkar Lake, Drikard The Foggy is adjacent to 'Grothmar' in Dalada Uplands and Elsnil Frigidheart is accompaning the dragon of Ice Cliff Chasms. And yes, I certainly believe it's a dragon. Will probably post a screenshot or two I took few days ago. Only thing is that it's pretty small compared to it's 'brothers'. J Striker 11:23, 12 March 2008 (UTC)

At the risk of pointing out th obvious this thing is humongus. Now we all know that he is big but I mean huge, look at drakkar(an outiline of him can be seen by looking at drakkar lake by pressing "m") Do the same for this guy by looking at the area between Grotmar Wardowns and Dalada uplands. That spiny looking mountian range is just his back which is over twice the size of drakkars entire body. This guy will be a pain to fight in GW2 we won't even be able to see his entire ody when we fight him, Meteor Shower will bounce of like rain drops. Monk Texas Ranger 22:42, 17 February 2008 (UTC)

yeah... lets all call some spikey thing in the ground grothmar... not dalada.... why? no reason... its completely between the two zones. Drakkar, and "Primordus" are like 1/30th the size of this giant structure... yeah makes sense... not. Because it its concept art is named water dragon... omg its an ancient dragon.... no sorry... 9/10 times concept art is named just by whatever the person uploading it chooses to name it. Check it out, seriously. and btw... when u try too hard to find things that arent there... u start to find shit that even the developers didn't intend. IE: Klingon is not a real language.... but try telling that to star trek nerds.

As to your first point, the dragon is called "Grothmar" for convenience. No one is claiming its name is Grothmar, but it's easier than calling it "the dragon that's buried in Grothmar Wardowns and Dalada Uplands" and much less vague than calling it "water dragon". For your second point, the article notes that the filename waterdragon.jpg came from the fansite kit. You know, those image collections that ANet puts together? Since the filename came from an official source, it's only logical to assume that the image really does depict a water dragon. As for your third point, the goal of Eye of the North (where that concept art and in-game model came from) was to act as a bridge between GW and GW2. If Primordius and "Drakkar" were meant to be hints at future enemies, why is it such a stretch to speculate that a mysterious, incredibly large, scaled creature that has its own concept art is probably a dragon? 68.3.110.248 23:31, 7 June 2008 (UTC)
Is anyone else getting sick of this guy? He's in every damned ancient dragon thread. He can't use correct grammar either.

Well everything he said is pretty spot on. Plus he can sign his post. Can you dispute anything that he said in his post? If so let the discussion begin, if not then you are just trolling. Please sign your comments with ~~~~ There are several things that will conveniently do it for you, and there are also reminders.

if anyone watches the new video of GW2 it actually shows, what appears to be a long dead dragon. It also shows Charr banners in front of it. This could very well be the dragon depicted. which would also explain the reason it looks more like vertebra rather than an actual dragons back.173.16.120.109 09:18, January 4, 2010 (UTC)