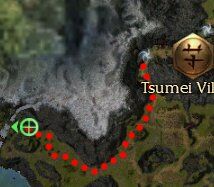 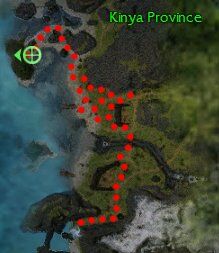 We're not going to add a map for each spawning location, are we?
--

There are 3 spawning locations of Lesser Oni in Kinya Province that I have found, one being north of the human village on the border of the grassland and the snow, the other 2 on peninsulas on the beach west of the Tengu Village. --Gares Redstorm 08:41, 9 June 2006 (CDT)

Karlos removed the following from list of dropped items:

Normally I'd agree, because normally weapons are generic drops, which we don't list, per policy. But in this case I'm not sure. Are these weapons dropped by Oni only? In that case we might keep them in the list, as an exception from the policy, because they are not generic. --

Unless you call getting them from chests, I've only seen them dropped by Oni. According to GuildWiki:Style_and_formatting/Bestiary#Items_Dropped, which was recently updated by Rainith, items unique to certain monsters should be added, and since this was updated recently, its not an out of date policy. I could see it being no problem if it was, say a Spiked Targe, but these are species-specific weapons, that in comparison, are like Unique Items dropped by bosses. --Gares Redstorm 06:52, 9 June 2006 (CDT)

Right. There's a grey area to this though: Certain items are not strictly exclusive to a single species or even a single creature, but they are much more likely to be dropped by certain foes, like Sephis Axes being dropped by Skeletons or Magmas Arms/Shields dropped by Titans on the Ring of Fire islands. --

I do agree with the grey area of certain items as I have seem Sephis Axes dropped by the Crimson Skulls. But with items such as Magmas Arms, Magmas Shields, Hornbows with the Jade Skin, etc, it would be safe to say that this are species/creature specific. I would not argue with the deletion of Oni Blades and Oni Daggers should a screenshot of another monster dropping anyone of those is found. --Gares Redstorm 08:41, 9 June 2006 (CDT)

Shadow Blades are the "obvious" blades of the Shadow Warriors, Eternal Bows are the "obvious" weapons of the Eternal army and "Oni Blades" are obviously from Oni. Yet.. We do not record equippable item drops, because the Oni also drop Amber wands and Bo Staves and whatever. I also doubt that an Oni Blade would ONLY drop from an Oni. Just like a Shadow Blade does not only drop from Shadow Warriors or even Shadow Army units for that matter, but anything in the Fissure.
I would think Rainith's note is about Unique items, like Rajazan's Fervor and the Yakslapper.--Karlos 12:31, 9 June 2006 (CDT)

That is what I wanted to see, some proof that Oni were not the only monsters to drop them. Rainith and I already had a discussion regarding unique drops and it was not just about green drops. On Rainith's talk page, see the part where Rainith states if it is only dropped by a certain creature. Also, where he updated the Bestiary format Items Dropped, the example for weapons seems pretty clear. --Gares Redstorm 14:29, 9 June 2006 (CDT)

Is it worth adding the skills it uses in hard mode? I've seen it using Critical Defenses, which it apparently not uses in NM. I haven't added it myself, since I'm very new to wiki :P. This is my first post btw.