Talk:Mask of the Mo Zing

This can be gotten from Vael in Grothmar Wardowns right outside Longeye's Ledge after completing his Quest Chain. He is a permanent Collector then, right next to the Shrine. The mask itself is labeled "Mask of the Mo Zing" and he wants 250(two-hundred-and-fifty) Superb Charr Carvings for it.

I'm guessing this is only available from the EotN charr, not the prissy weakling Ascalon Charr --Blue.rellik 21:58, 2 September 2007 (CDT)

Might be a dumb question, but I don't want to assume anything... is this customized upon creation like all other armor?

Almost certainly. Does anybody know if these common armor pieces can be shown in HoM along with full elite armor sets? It'd be a pity to have Chaos Gauntlets and not get them in GW2. - Ayumbhara

Does the mask change the eyes black or does it show the eyes you have with your character? For example, if I made an assassin with a white eye and put this mask on, would it change both my eyes to black or would one still be white? Ah. Nevermind. Looked at the link at the bottom and the eyes are blue. The picture doesn't really show the face that well.Darkobra

Ninja without a master is not called a Ronin -- Ronin ('Wave man') were specifically samurai who had, for some reason, lost their lord. Feel free to research this for yourself; some Ninja posed as Samurai but, in and of itself, a masterless Ninja is not a Ronin. Change the main page as necessary. 'Mo Zing' itself might be a GW-centric term, although 'mo' can mean 'not' or 'none' in Cantonese. 203.108.43.58 16:33, 3 September 2007 (CDT)

i think ANet should re-think about the need of 250 carvings to craft this. seems sorta like destroyer gauntlets, a bit too much i think... o.O

I think its appropriate, its a gold sink basically, its so they can drain gold from the economy while not making it look like there doing it.--Gigathrash 18:13, 4 September 2007 (CDT)

The thing is they don't drain anything from the economy, the gold just changes hands form buyer -> seller, It doesn't go out of the economy Viruzzz 13:03, 7 September 2007 (CDT)

Haha I would get this if anet let us put the blindfold over this.. think how cool that would look.

Oh man, that was like my favourite music video back when it came out! Maybe Anet will allow us to overlap common head pieces w/o getting the bonus from both, just one. That'd be coolies--Darksyde Never Again 15:59, 24 September 2007 (CDT)

Great picture, I can't even see the mask... all I can see is what is NOT covered by the mask. next time choose an appropriate, lighter background when displaying pictures of any items dyed black/dark colors. Thanks =D --MagickElf666 10:51, 6 September 2007 (CDT)

it's black dyed, the purpose was to show how the mask is dyed black... Duh.

here's another one in the character selection screen...

just a little info about the dyes on the mask. Dying the mask black makes it so black u can barely see it on the Inventory. going to try out this one dyed white when i have the money then i will show you guys a pic of it. :D

"Great picture, I can't even see the mask... all I can see is what is NOT covered by the mask. next time choose an appropriate" Don't be so rude. If you can't see it, turn up the brightness, i can see it just fine and i think it's a great picture.--Darksyde Never Again 16:01, 24 September 2007 (CDT)

resize the images in an image editor of your choice and re-upload them maybe.

Disagreed. This looks great on my Ranger. Reminds me of the hunting mask I wear when buck hunting in the winter.

This looks awesome on sins... and every1 who says that it doesnt is jealous nooblet

After I took off my cape I realized this has clipping issues with Male Assassin Elite Kurzick Armor, I'll post a screen later if I can. Anybody else know if this clips with any other armor sets? Icy Hot Ben 02:20, 9 October 2007 (UTC)

Yes, on the Norn armor for male Monks, the back of the mask sticks through the fur lining of the armor. Also, I posted a picture of my beard sticking through the mask, apparently only your characters hair changes when you change hats, and your beard will stay and stick through the mask! Imbar Moongazer 01:02, 18 December 2007 (UTC)

Would guess that beards belong to the "face object", while masks being headwear probably belong to the "head object", and so wearing a mask does not "switch off" the character's beard (unlike say the bandana over a spikey headstyle). Bit of a shame, as it does ruin the effect some what. --Wolfie

Green and purple give a very good approximation of black dye on this mask (slightly reddish hue to it).

But is there a way to get a cheap uncolored black (or dark gray) without buying a black dye? I'm trying to get the mask to match my black Elite Stoneforged armor. -Mike 22:55, 23 March 2008 (UTC)

Dyes other than Black or White?[edit source]

Can you dye these masks a color other than Black and White? I've never seen anyone with a different color.

You can, it's more like no one ever does. :p 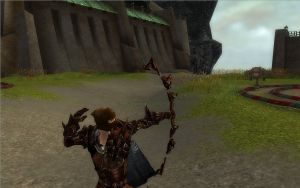 I've got three masks across all of my characters, one's dyed White, one Black, and the other some weird mix (probably Blue+Orange+Brown or Green+Purple+Brown =/) to go with my Ranger Primeval Armor. It doesn't fit perfectly (I would have liked a more orange tint), but it's hard to tell the difference most of the time, because of the lighting:
ــѕт.мıкε 12:11, 17 November 2008 (UTC)

With post-processing effects and x4 AA it seems to generate white noise pixels. --