This guy is awesome. That's all I can say.

An enemy who can't die...NOOOOOOO! There will be a Epic Conflict between Master of Damage and Oink. Flechette 03:29, 28 September 2007 (UTC)

Wee, can't wait to start a mini-rivalry between all my characters for the best DPS. So far, my Assassin's in the lead (even though the others technically didn't try this yet); over 7k damage in 120 seconds, average DPS of 61, death after 10 seconds. Can't wait to beat it over and over again; I want to try out a Locust's Fury build just to see if it averages higher. Also wonder if a single SF Ele can top that, or if I'd need a second (or fourth) Elementalist for backup... --

Depends; Air Magic can do more damage then SF, but you might get higher overall DPS in the long run with SF. Then again, Dual-attunement Lightning Hammer... now that's an idea worth trying.
I'm trying to go for about 120 seconds on each build, so while I can easily break 61 DPS with an Assassin, I don't want to stick myself with high recharges and kill my DPS in the long run. Lots of fun tests you can do with this guy though now, the fact that I'm agonizing over single DPS points is a good thing. :P --

Gotta test if that guy also counts Life Stealing as DPS, so we can, for example, look how big DPS of Blood Spikers, Touch Rangers or Gaze Mesmers damage is. But still, this guy pwns. — Abedeus

Aaargh, if only Assassin's Promise would work on him =/

Should probably note somewhere on the page that the Master has 60 AL. Also, I think it'd be pretty neat if Anet let you talk to him to switch options, such as to count/not count degen, and count/not count damage to the adjacent targets.

Or to make him attack/cast placeholder skills that would take into effect empathy/backfire/indirect sources of damage. Rette Alarix 19:06, 2 October 2007 (UTC)

I dunno, if Empathy's your main source of damage, that's dependant on your foe anyway, so your DPS would be skewed if he attacked or not. Backfire/E-Denial/Interrupts are better tested on the Master of Healing or something, because your main purpose isn't DPS, it's shutdown. Master of Damage is just for testing DPS-based characters, like Warriors and Elementalists, or something. --

He has 600 health, I just tested with lifebane/shadow strike doing chunks of fifty. Someone else can add it, I don't trust my wiki coding :P ~Aradon

Thanks. I added it, but someone else can adjust the wording if they want to make it sound more professional. VegaObscura 01:15, 6 October 2007 (UTC)

My record for dps was over 410 damage for 2 to 3 seconds. He said time until death: 1 second, try to beat that.

It's all about timing

Replace with a Master of Damage with the skin of Master Togo, after all I went through with him, I want to use him as a punching bag. Don't let me down, people. Flechette 08:28, 24 October 2007 (UTC)

After all the time I spent trying not to let Togo die, killing him repeatedly would seem counter-productive. What I'd really like is for Togo to gain all of Master of Damage's abilities! That way, he can charge through mob after mob, and only stop ever so often to shout out his DPS. --

YES! Aaargh, how many times HE has been stuck behind an invisible wall due to his -50% move speed! Nahpui Quarter (I thought, the one with 2 teams) has nearly phailed because of him being 10 miles behind hugging a wall. <SPOILER> He's dead now, anyhow, so it's even more logical to have HIM as a dummy. He can't die again, in theory. </SPOILER> And I want to see if I can recreate that 700+ DPS on him >:) --

It's not his fault he aggro's so many mobs... it's that damned sun! Constantly bouncing off his smoothly polished dome, and attracting all sorts of creatures for many radar ranges away. --

Jioruji, both comments are not valid. He can't gain the MoD abilities, that would mean someone like Lukas would have to be Master Togo as he wouldn't be noobish enough to qualify as Master Togo any more. As for being bald, he aggroes 24/7, not when the sun's out. Flechette 09:02, 24 October 2007 (UTC)

Oh, but he'd still be annoying enough to qualify, he'd just be different about it. And as for the second point: moonlight. --

Togo had a intimate relationship with Mhenlo when last they were together. --Blue.rellik 10:01, 24 October 2007 (UTC)

i did some tests with energy and I believe him to have 30 energy and four pips or more of regen. Since this test wasn't carefully timed, I'm guessing. I used mind wrack, spammed esurge with myself and heroes and when mind wrack triggered, i hit him with aneurysm and he gained 28 energy. I know he has a faster regen than the test dummies. —♥Jedi♥Rogue♥17:24, 30 October 2007 (UTC)

Probably 30e and four pips, from the looks of things, he's at least based off a Monk. Monks have 30 energy by default, so that sounds about right... --

See if anyone can beat this (no, it has not been photoshopped or edited in any way and damage was done by me alone and others did NOT boost my damage):

How about energy management (br/bip support)? or things like mimicry? used any?

His DPS is 83, that's not too shabby - against a real opponent. However, the target doesn't kite, prot, heal, interrupt or lineback. Doing damage to a few armors that sit there and take it doesn't mean anything. Go do that much damage in RA or HA or something and I'll be impressed. -Auron 12:14, 3 August 2008 (UTC)

Over 171 seconds, which is probably consisting of spike damage every X seconds. With 500 damage in one second, consistant, you can't get 83 DPS. ---

My Rangers best spike so far, 3 hp to go! 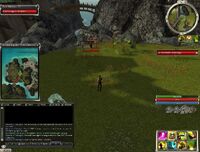 My Assassin's Conjure Moebius build over the full duration.

no /bow or 180sec waiting[edit source]

That isn't instantaneous, however; he won't end the test on his own unless he stops taking damage for more then about five seconds. /bow or the 180 second time limit will end it instantly. -- Jïörüjï Ðērākō.>.cнаt^ 14:17, 29 March 2009 (UTC)

No, you. —Dr Ishmael