The aspect of dialogue taking a long time might not be a glitch, it might be put in to make the mission harder, because it is timed. If one could fly through this mission, the time limits wouldn't be as high, so ANet was counting on something taking a long time. Maybe this was a part of that something. -Auron of Neon 01:25, 1 May 2006 (CDT) 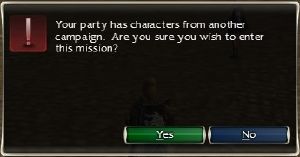 I don't know about the entire party not earning any XP, but here are a couple of screenshots —

I've rearranged the page to match the standard Prophecies mission page layout. I'll eventually do likewise with the rest of the Factions missions. I think it's silly to have missions of one camapaign have totally different layouts from those of another. Prophecies has, by far, the most polished mission pages, as well as the most missions, so that's the layout to switch to, I think.

For now, the actual text of the page is mostly unchanged. I'll probably redo the hard mode section once I have more experience with hard mode. Quizzical 23:15, 9 March 2008 (UTC)

When I recently re-did it they are like tanks! They don't seem to take much damage from the HM creatures. Whereas normal AL60 heroes and henches get smashed in comparison. It's still possible to get masters if you let them do the tanking. Just make sure you go to that silly tree area when they start talking about the compass or you'll waste time. —The preceding unsigned comment was added by 60.48.230.196 (contribs) 10:42, 3 June 2009 (UTC).

That's new... how are they against the Eles?

Hard Mode makes NPC allies considerably more sturdy, despite the theoretical 60AL. Yijo and Togo work well as tanks against most foes in this mission, although things can get a bit out of hand in the "zoo" with all those animals attacking under IAS. Entropy

Unless it's my imagination, they did seem to be squishier before when I was doing the Hard Mode stuff (often had to manually get heroes to keep them alive). Now when they get hit they just lose a small bit of their life. Was this a recent change? e.g. due to the z-quest stuff? I also redid tihark orchard hard mode for a zquest and this time the ally NPCs slaughtered many of the HM skrees before I could even get to them. In contrast the first time I did it ages ago the ally NPCs mostly ended up as corpses on the ground. Not complaining though, just curious :). 60.48.224.159 15:18, 9 June 2009 (UTC)

Hard mode has made NPC allies vastly stronger than in easy mode since 2007--and hard mode was introduced in 2007. This makes the biggest difference in some hard missions with a lot of NPC allies, such as Eternal Grove, Dzagonur Bastion, or Vizunah Square. The effect you're referring to in Tihark Orchard is not merely that of NPC allies being stronger for hard mode, but also level 20. Most of the NPCs in Tihark Orchard are level 10 in easy mode. It shouldn't be too surprising that a level 24 skree slaughters level 10 NPCs, but a level 26 skree has more trouble with level 20 NPCs. That happens here, too, where Yijo jumps from level 10 to level 20 for hard mode. Quizzical 17:39, 9 June 2009 (UTC)