please add the armor of the head tattoo.....I have been trying to get these uploaded, but I cant do it......there are 5 pieces of armor, and only 4 show up on this page! (icons)

No there is no version that allows insignias, I guess that's what you mean. It's Factions-specific, only Nightfall and Obsidian armor accepts insignias (atm) — Stylva (talk)(contribs) 07:49, 30 December 2006 (CST)

Ah but now because of the Thursday, May 24, 2007 update, all armor in every chapter is inscribable. ^^ Kalle Damos

D can some1 for girls make it white instead?? Can show up any features easier

My monk has this armor dyed white, I dont have the rest but for now Here--Xilarth The Wise

Ok, Here is the screenies:

Is it possible to dye this pink? I tried with white + red it's not the same pink as my armor now...I have censor and woven as pink but no clue how to get this one to pink 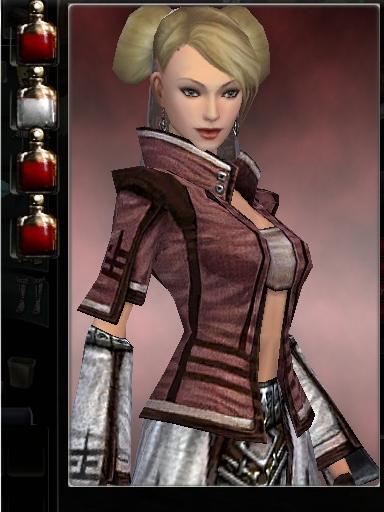 This wiki isn't a good place to make requests like that - they hardly ever get answered. Guild Wars Guru, though, has a whole forum dedicated to screenshot requests, so I'd suggest making your request there instead. —Dr Ishmael

Question, in the screenshots shown not to show dyeable areas, what is the color combination? Just Green?

In the images on the main page, everything is either in the dyed <color> section, or default crafted gray. RoseOfKali