Could someone please add pictures of the female obsidian armor with the (new) blacker black dye, and not the old half black half grey dye.

Just a wish, if u have monk obsidian armor (female) with new black could your please add it? 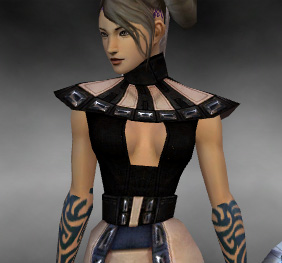 "Since the most recent update, A-net made the armor no longer dye inverted, as it once did."

I think the above needs editing. "Most recent update" is just too general. Besides the colour inverts were changed at the same time as the Shards update. See above comments to see this was way back in March 2006. --SK

There is armor with insignia slots, but no one has told what are needed for crafting it. And I haven't been there myself. — Stylva (talk)(contribs) 19:04, 4 January 2007 (CST)

so is this the only armor that dosent have some kind of spikes on it —The preceding unsigned comment was added by 24.89.72.155 (contribs) .

Spike? what have you been looking at? —The preceding unsigned comment was added by Our Lady of Health (contribs) .

He was referring to FoW armors, not monk armors. Most FoW armors have obsidian spikes on them, whereas in this set the obsidian is smooth. Tain 13:32, 2 April 2007 (CDT)

It was intentional, and too bad the preview window doesn't let you pick which crafting material you want. Tain 15:34, 5 April 2007 (CDT)

LOL why would you pay for the armour to alvage it?

this is possibly ugliest monk armor out there. hate how nearly every monk in HA/HoH have black obsid. they probs dont even look at the armor before buying it. why isnt it like the good old days wen people actually cared about wat the thing looked like and not jst how much it costs or how 1337 it is.

Amen. i dislike most 15k armor because most (aside from female ranger druid and some others) looks almost identical to the 1k version. 1 of my favorite examples is ranger canthan. the 1k has cool swirls on it and the 15 doesnt!!!zan november 9 4:45

Although I do agree about the black dyed Obs monks in HA/HoH (since I personally think black on it makes it look bad) I actually think this is rather nice set, certainly the females atleast. - Shuuda

I sorta agree with u guys there, i dont think its too ugly, but the fact that every1 is doing EXACTLY THE SAME THING pisses me off so bad.

I don't think it's ugly per se, but there's a lot prettier armors out there for monks. What gets me is people dying it black, especially the new black -- it removes all details and makes the armor look like a black hole or a graphics glitch. It doesn't look good at all. Just say no to dying your Obsidian black, folks! --dominique 14:18, 24 December 2007 (UTC)

I think this armor looks good in green or blue. Never seen it in white but thats probably because of the armors off-white/tan color. Its hard to beat 15k cathan/kurzick.--JRyan 09:12, 5 January 2008 (UTC)

I quite like the armour as well, though I have to agree with statements about all the e-peeners with their black armour and gloves and mask/blindfold. Dying the armour black and removing the detail is one of the worst things you can with it. 86.7.115.106 02:28, 8 December 2008 (UTC)

I am thinking about getting FoW on my black monk, I have searched all over the web and I can't find any pictures. (Plz include which color dye you prefer)Thanks. -Not signed because I don't know how to do all of this "Wiki" stuff.