Someone might want to see how Mesmer armor handles the masks, and format the monk articles accordingly. -User:PanSola (talk to the

Not sure that would work: since the mesmer masks are on the face, you only need one good image to show what it looks like, so their armor pages are noticeably simpler than what's probably achievable for the monk scalp designs. -Shattered Self 17:02, 22 June 2006 (CDT)

Not sure what you thought I meant that you judged wouldn't work. The point is the splitting of functionality from art. -User:PanSola (talk to the

Ah, thought you meant the nice little arrangements of images the mesmer section has. Yeah, functionality and art could be split, without much trouble. I'm not going to do it, I'm sick of looking at scalp designs now. -Shattered Self 20:44, 22 June 2006 (CDT)
Feh, got bored at work and did it. Now this page just needs details on getting monk headgear from collectors in Cantha (if there are any that provide headgear). -Shattered Self 16:44, 25 June 2006 (CDT)

Thanks. Though to be consistent with the Style and formatting guidelines, acquisition info should be in the respective art articles and the crafting quick reference only. -User:PanSola (talk to the

Heh, I never moved anywhere d-: That's the way the Mesmer armor articles were laid out when I first mentioned it at the top of article. It's fine if you don't want to do it, eventually someone will (-: -User:PanSola (talk to the

Why should we want to merge this article with attribute headgears, which is just about functionality, not art? — Stylva 02:13, 1 December 2006 (CST)

There was originally one article with all headgear information (functionality, art, and acquisition). The two articles were split on the suggestion that everything else about monk armor (and every other class' armor) had been split in that manner. That was done, which is why there are currently two articles. Then someone went and removed the links on the monk armor page to this page. The other page has pretty much all the functionality and art info, it just lacks the acquisition info, but it's linked to on the monk armor page and this one isn't, so... --Shattered Self 07:50, 1 December 2006 (CST)

I see.. I would prefer to also link this page on Monk armor instead of merging them together in one huge article. — Stylva 05:32, 2 December 2006 (CST)

Definitely. My opinion is: Art and crafting information here, information about PvP function (like Wanderer's Armor or Judge's Armor) at Monk Attribute Headgears

Males
Elite Luxon (from someone whose monk is bald or has hair only at the very back, please)
Elite Sunspear
Vabbian
Norn
Asuran
Dwarven
Ebon Vanguard

We're making progress, only 5 armors left that we need screenshots of. I'll be taking care of the last 2 female ones in the near future, so we just need some nice person with a bald male monk to drop about 60k on head tats and we'll be set... --Shattered Self 20:51, 1 March 2007 (CST)

Added images for female Ancient hat. --Shattered Self 22:15, 3 March 2007 (CST)
Added images for female Primeval hat. Accidently salvaged the damn thing before taking screenshots, so I had to buy another. >_< I am now very poor. Come on bald male monks, step up and bankrupt yourselves for the community; it's fun! --Shattered Self 10:05, 5 March 2007 (CST)

new labryinthine armor has new head tattoos as well...here is my image http://gw.gamewikis.org/wiki/Image:Labryinthineheadtat.jpg#file please add to where ever it should be posted. Cosyfiep 20:18, 22 June 2007 (CDT)

here is my ebon male headgear and asuran...there is no space set up for it on the page...so I will let the powers that be handle it: 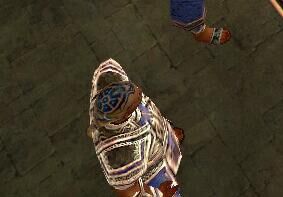 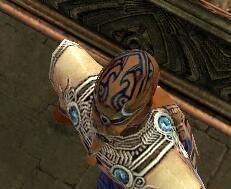 We still need Nightfall crafters, as well as Nightfall and Factions collectors (if there are any). --Shattered Self 20:03, 3 March 2007 (CST)

Read the Factions tables again, I think you missed something. :P But yes, the only armor collectors in Nightfall are in Istan. - BeXor

In Prophecies you could +attribute headgear from collectors, and you can in Nightfall as well (though not max AL). I dunno, just seems kind of inconsistent on ANet's part. Oh well, I guess that's their problem. --Shattered Self 09:56, 5 March 2007 (CST)

Your idea was so nice that I couldn't resist changing it myself :) I also corrected a little mistake I had done when I created the Factions table :)
— Helena

Awesome! I logged in, and I knew there was something on this page I wanted to work on, but I looked at the page and couldn't figure out what it was. So I looked in the history and here in the talk and realized you'd already taken care of it! --Shattered Self 20:57, 9 March 2007 (CST)

Hmmmm, a small problem with your update to the Factions table has occurred to me. For the Ascalon/Canthan/ShingJea armor, each of these is crafted by a different armorcrafter, so there's 3 different crafters at each location. Should we make a line a for each crafter, or just put various or something like that in the crafter column, or something else? --Shattered Self 00:45, 10 March 2007 (CST)

Uhm, good question. Now when you mention it, I remember my brain was bugged with the same problem when I created the table. Perhaps we should write them all... I'll try, I think.
— Helena

I tried now. Not sure I like it at all... But what to do... And those stupid spaces are freaking me out!
— Helena

Proposed solutions to the stupid spaces can be found below, in the Sandbox section. --Shattered Self 23:04, 10 March 2007 (CST)

Haha, I actually meant the spacing between all the crafting tables, but whatevs :)
— Helena

I don't recall exactly which update, but I believe at some point ANet retroactively added "+1 energy" to all non-Insignia headgear. We need to investigate how this may have affected the availability/stats of Believer's (bonus-less) and Ascetic's (+1 energy instead of +1 attribute) headgear in the Prophecies and Factions campaigns. --Shattered Self 20:49, 9 March 2007 (CST)

In Prophecies every scalp design has +1 energy, except the Believer's, and Ascetic's and Believer's are the only ones without attribute bonus. In Factions Monk's only has basic stats, and the four others have energy +1 and an attribute bonus. - BeXor

I've been thinking. Currently, the crafting section Art Style links go to the page for that art style. The Prophecies art style pages don't show headgear (because it's all the same), and the Factions/Nightfall pages only have a small section for headgear images. If people came to this page to see how to craft the art style they want, why not just have the Art Style field link to the appropriate image farther down the page? --Shattered Self 21:51, 12 March 2007 (CDT)

Vote for the version you prefer:

Something Else
Please add your proposal at the end of the Sandbox and create a voting field for it, or describe it here.

Note that 15k "ascended" armor data has been omitted from the samples below to conserve space.

Give each crafter a true row in the table.

Give each crafter a true row in the table, and rearrange the columns some.
(Note that this alteration would require us to go back and alter the other tables to match.)

Just put "various" in the crafter field in cases where there are multiple crafters in the same place making different art styles of armor.

I've just created a monk in Cantha. The armorer, Nu Leng in Shing Jea Monastery, offers a Dragon Scalp Design which is not listed at all in the Canthan section. Nor is it listed anywhere else on the page (based on textual search). Since I haven't played with tables in the wiki I'm not willing to try altering things myself. -- Sabardeyn 00:02, 6 February 2008 (UTC)

, this article is... I'm working on filling in all the missing images, but may need some help with the page. RoseOfKali

Well, I shot all the female images, sadly on the same day I wrote the above, but just now finally getting around to cropping and uploading them. <_< Will also do the missing male ones afterward. Not sure where to even begin with the tables, though, they're a wreck. :/ RoseOfKali

Actually, *all* the headgear articles could use some work. To begin with, all the core professions (I think, maybe not all) seem to have a "X headgear" article AND a "X Prophecies (Masks/Scars/etc.)" article, and those should probably be merged. But it's not something I feel like bothering with right now. —Dr Ishmael

I'm not so sure about that. The thing is, all the other headgear types belong to an armor set, and thus have a full set of images on the pages of those armor sets. Prophecies headgear, especially for casters, and partially so for warriors and rangers, applies to multiple armor sets, or rather none at all, it's "universal" of sorts, so where would the full front/back/profile/alt-profile pictures go? Either put them on each of the armor pages that are crafted by the same crafter as the "universal" headgear, or leave as is now on a page of its own. This page is a gallery of front images only, so I disagree with merging them here. RoseOfKali

Other than the dyed images, all the crafting/collector info is already duplicated on both pages.
—Dr Ishmael