I am not sure about the lower three pics. I would suggest keeping the official source pic and removing the others, as the official one shows the color of the armor undyed. The armor I used is dyed crimson red, blue+green+purple+dye remover.

has anyone noticed that the female leggins for this armor have lower resolution than the rest of the set?
well, in fact I think that all female necromancer leggins have this problem >< --LaDoncella 22:01, 26 June 2008 (UTC)

Not sure what you're talking about, tbh... And I have all of them, I would have noticed something. RoseOfKali 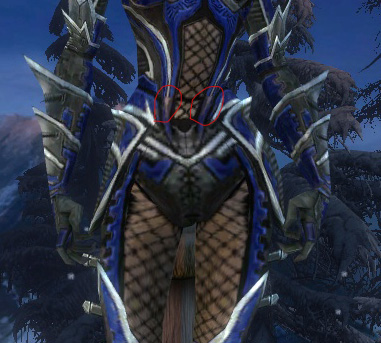 Look at the red circles in the screenshot. The white/silver lines, on the leggins looks a lot wider and blurred than on the chest part. --LaDoncella 14:53, 29 June 2008 (UTC)

This is not a resolution issue. And it's not just female necro, it affects all professions and armor sets, to varying degree. This all started with the infamous dye update, and since then, many armors have remnants of the profession's base armor colors that cannot be changed. This is what causes the "blur" you're talking about, that part was supposed to be blue in your case, but is a weird purplish mix of blue and red. And as a matter of fact, Elite Kurzick Female Necro is one of the less affected, the thing you pointed out is virtually unnoticeable unless you're staring right at it. Try dyeing Elite Luxon Necro (either sex) into yellow or black, and look at all the red spots everywhere. Or check

. This is why I am not going to dye my Obsidian black, I can't stand those red edges... RoseOfKali

Well, it doesn't look like blood to me... It just looks annoying. I love GW for its impressive graphics quality, and this stuff just ruins many armor sets. I liked the old dye scheme better. RoseOfKali