Price Checks: What is NtT Doing to the Economy?[edit source]

I thought it might be useful to see Nick the Traveler's impact on the GW economy. Please amend my observations with your own.   — Tennessee Ernie Ford (TEF) 05:20, 3 May 2009 (UTC)

I saw lots of people spamming that they were selling dessicated hydra claws around 500g in Augury Rock that week. Last week, I'd be surprised of Margonite masks went for even that much. Quizzical 17:09, 15 June 2009 (UTC)

While Nick wanted Parchment (week of 22 June), the stable WTB/WTS price actually dropped below RMT prices of the week before. As early as Monday (22 June), you could easily buy it at 140-160

from players, while Buy price was 150

Throughout Herring week, some people were paying/offering more for 5 fins than others were paying for 1 herring. More surprisingly, the price of 5 fins exceed the typical price of gifts bought directly (4-5k). So, in the same trade window, it was possible to see: WTB 5 fins 5k, WTB 1 herring 4k, WTS gifts 4k. In other words, people were paying a premium to get gifts on their own instead of buying from someone else.
On Sunday, there were as many offers of WTB fins 1k (or equivalent) as WTB 500g. I've listed 500g and 1000g as the stable WTB/WTS, as no one was selling for more than 1k. In fact, on Sunday, there were few WTS at all and those only for 2-5 fins (no bulk sellers were advertising). A sellers market from Mon–Sun.   — Tennessee Ernie Ford (TEF) 02:36, 3 August 2009 (UTC)

Jade Bracelet: There were no truly stable prices: on any given day, you could find WTB > 700

Glass: Another anomalous market: while the NPCs are offering to sell Glass for 170

, many people have offered WTS for 160

More on Glass: For stable prices, I've noted the final trader range; no players were offering to buy or sell on the weekend when I checked. Before Nick's request, the NPC typically offered WTB 50 – WTS 150; that increased as high as 170/270 on Monday dropping to 120/220 by Sunday (approximately halfway between the pre-Nick and Nick-rush prices).   — Tennessee Ernie Ford (TEF) 20:49, November 8, 2009 (UTC)

Well it may be a fluke, but the amount of items collected seems to go in groups of three, first three, three items were needed, second three one was needed and the last two, two were needed, so I predict two will be needed next week aswell

There are currently two tables for past collections (Chronological and Patterns) — they contain largely the same data, except for things no longer of concern, such as when Nick arrives/moves, how long he stays. If there are no objections, I will combine them next week after the Nick craziness subsides.   — Tennessee Ernie Ford (TEF) 17:21, 28 June 2009 (UTC) 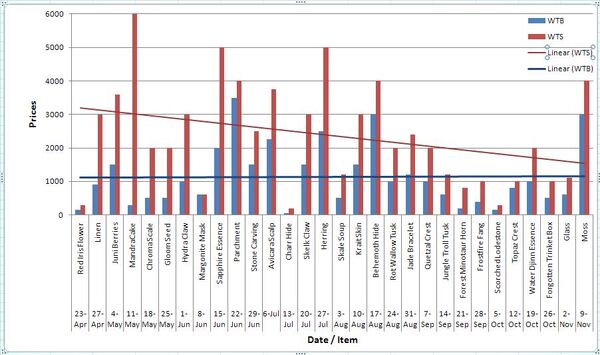 A good six months since Nick has been convincing us to kill stuff to supplement his warehouse of supplies and some trends are available.

I've used the data stored here on the wiki.

Argh. The names are correct; the dates are not (alas, an Excel->chart->jpg issue which I did not catch). The trends still apply; unless there's a lot of interest in a corrected chart, I'll leave things they way they are. Thank you for pointing out the error.   — Tennessee Ernie Ford (TEF) 05:49, November 19, 2009 (UTC)

Since we store the data for Nick's location, how hard would it be to automatically populate the location list (at the bottom of the page)? Seems unnecessarily duplicative at the moment. —Tennessee Ernie Ford (TEF) 16:22, July 19, 2010 (UTC)

There's no easy way to do it with the extensions currently available from Wikia. Yes, a bot could do it, but it would be fairly complicated to write. —Dr Ishmael

Rats. (I guess GWiki's stellar wikicoders have been making look easy to build useful templates for parsing data). (I know how to do stuff like that in Excel or Access, but only a vague clue about what's involved for wiki templates.) In any case, thanks for the quick response (here and elsewhere).  —Tennessee Ernie Ford (TEF) 16:51, July 19, 2010 (UTC)

Mendel usually does it with extensive use of #explode and string functions like that. While it does work, the code is very difficult to read, it requires the user to define an arbitrary data structure, and I imagine it's pretty CPU-intensive. —Dr Ishmael

(Reset indent) I've adressed TEF's suggestion in a demo here that uses the live data on this page.

I'd like to point out that Dr Ishmael's demo also employs #explode, an arbitrary%data%structure, a template you need to call before you can use his variables, a new syntax that wiki users have to learn, and I know that a single switch statement that has 137 branches that contain dialogue is not only a nightmare to maintain, but also hits the server hard. So please don't disparage my code before you've seen it; suggestions and improvements are, of course, always welcome. --◄mendel► 02:31, July 20, 2010 (UTC)

Bloody hell, I knew I was shooting myself in the foot with that comment. Whatever. Mendel is a wikicode god, I am scum. Good night. —Dr Ishmael

I realise that Nick hasn't started collecting anything of a dungeon drop nature (yet)... is this to say that he won't? Stuff like Beetle Eggs, Incubus Wings, etc. I know they're EotN items, and he doesn't collect that much in EotN nature as it is; I'm being purely speculative at this point. --Valandil D 16:55, July 24, 2010 (UTC)

Trophy is the correct phrase for such things, too; there's nothing fundamentally different about Skelk Claws from Skelk Fangs except that one is found in dungeons and the other above ground. You'll notice that (a) Nick almost always collects things easily available at or near his current location; (b) there are only 15 possible eotn regions compared to 137 total; and (c) there are over 800 trophy types. Consequently, (1) he's going to request eotn trophies only 11-12% of the time and (2) he's only going to request a small fraction of all possible trophies (even discounting rare mats and quest items).

tl;dr The only thing stopping Nick from requesting dungeon-only items is that the odds are against it.  —Tennessee Ernie Ford (TEF) 17:06, July 24, 2010 (UTC)

Arguably, Amphibian Tongues and Chromatic Scales are dungeon trophies, since the monsters that drop them can be found both above and below ground; the Scales more so, as the drakes are found in 4 different dungeons versus only 1 overworld area. Frogmen can be found in 2 of each type of area, so the tongue could be called either.
Anyway, I made a table here to classify each trophy as "overworld" or "dungeon" and then summarize the results. Out of 35 EotN-exclusive trophies (that I know of; splitting the trophy category by campaign would be useful), there are 12, or ~1/3, that are purely overworld trophies, and only 8 that are purely dungeon trophies. This supports Ernie's hypothesis that "the odds are against" Nick collecting dungeon trophies.
He's collected 7 EotN trophies so far, and 2 of them have been partially dungeon trophies, so that sounds about right. I'll even predict that the next time he goes to EotN, he'll collect a pure dungeon trophy. —Dr Ishmael

Ooh! Let's take odds (what do we have for the winners, Ed?) If you look at each area and their connecting dungeons, most of the possible choices are land-only trophies or trophies available above and below..

That leaves a 40% chance that Nick visits all 7 areas and (if he asks only for trophies) fails to ask for a dungeon-only one. Leave out Magus Stones and that changes to 60%. So, I predict that he'll never ask for a trophy that can only be found in dungeons. I'll go one step farther: when he is in Arbor Bay, he'll ask for Krait Skins.  —Tennessee Ernie Ford (TEF) 22:57, July 24, 2010 (UTC)

Me, too! I dunno why I find it so interesting to learn about the guy, his requests, and the related futures, commodities, and derivatives markets markets. If you like watching this, check out some of the old predictions made here, at guildwarsguru, and at the official wiki. All types of speculative fiction. :-)  —Tennessee Ernie Ford (TEF) 05:14, July 25, 2010 (UTC)

For Magus Stones, if we leave out the Wind Riders (do they even drop a trophy in EotN? GWW doesn't list it) and the trophy he's already collected (Amphibian Tongues) and the trophy we know he'll be collecting in Arbor Bay (Krait Skins), we're left with 10 trophies, 6 of which are dungeon-only. I'd say the odds are good that he'll pick a dungeon-only trophy there. Maybe Beetle Eggs or Fungal Roots for Yileng, or Golem Runestones for Zinn. —Dr Ishmael

On 23 April 2009, Nick was in post-Searing Regent Valley but requested Red Iris Flowers, which are only found in Pre-Searing Ascalon and in Ice Cliff Chasms.[edit source]

But you can't visit Nick, then immediately start farming them, without going through a portal or map-traveling. That was my intended point with that list. —Dr Ishmael

But who does that? Everyone looks at the wiki or asks someone else for Nick's location. Even those that discover Nicky on Mondays usually go back for another toon to farm.

To be clear, I'm not suggesting that we remove the entry. I'm suggesting that there's a reasonable argument that it's not exceptional. In a way, it's really the most emblematic of Nick's requests for something local — this "memory of a happier time" could only have been been better if we could bring him the apple baskets in bulk.  —Tennessee Ernie Ford (TEF) 21:44, August 23, 2010 (UTC)

It's meant to be statistical, not practical or "emblematic". —Dr Ishmael

I apologize for making two points in the same paragraph. (1) It's reasonable to suggest that Irises weren't exceptional; (2) It's the request that fits best with his storyline.  —Tennessee Ernie Ford (TEF) 22:48, August 23, 2010 (UTC)

Has Nick every asked for items that can only by acquired in missions?[edit source]

For example; has he ever asked for Ghostly Remains, a trophy that can only be found during the Nolani Academy Mission?

You can look at our full list, which we have classified in a variety of means. To the best of my knowledge, the closest he has come is to require Red Iris Flowers in Prophecies (although they can only be found in pre-Searing and eotn), Branches of Juni Berries that can only be collected during Insatiable Appetite, and Gloom Seeds that were requested in prophecies, but require hunting in an elite area.  —Tennessee Ernie Ford (TEF) 06:55, October 5, 2010 (UTC)

Ghostly Remains are pretty unique in that respect - they don't have any collector at all, so they kinda seem like an incomplete idea that either a) should drop from all humanoid ghosts in the game, or b) should have been removed completely. The only other mission-exclusive trophy I can think of is Celestial Essences. —Dr Ishmael

Collections details table has two "Campaign" columns, with the second one being nearly empty. It's too fancy for me to fix. RoseOfKali

The first is the item's campaign. The second is the location's. The location one is mostly empty because I haven't implemented an SMW infobox for locations yet. (PanSola actually did one a couple years ago, but only did a pilot with places in Vabbi, which is why those areas show up with "Nightfall" in the table.) I was going to do that immediately after finishing with the new ItemInfo, but then the whole "leaving Wikia" business came up, and I decided to delay it until after we move. —Dr Ishmael

5 months later, locations finally have an SMW infobox, so the location-campaign column in this table is fully populated once again. —Dr Ishmael

It's back, page just needed a refresh. —Dr Ishmael