Just happened again, except a little less ran away, about half. They do tend to run back if you get back in compass range of them. --Blastedt(Talk)

I've seen it a couple of times too. Sometimes they also just don't come in. I open the gate and nothing comes in :S -- Nova

What happens is that the boss goes around to the upper "back route" instead if you do it right away. The way to keep this from happening is to take the back entrance and kill the first two charr, then turn around and own the ones at the gate. They never run around if you do that.--Knux 04:32, 20 April 2007 (CDT)

I don't know if this happens or not, but I coulda swore that after Rurik used the Stormbringer thing and caused the rain, I started doing 30-50 with my Icy Dragon Sword, but earlier on the same group I was doing 10-30. Can anyone confirm this? -Polantaris

I don't know which update changed it, but now after clearing out the Charr and "liberating" the Academy, Rurik will take the two Flaming Scepter Mages outside with him, instead of leaving them inside to rot on the useless Obelisks. It has always bothered me, because he says "Bring the mages. Their homecoming is long overdue.", and yet they have always in the past refused to leave. Now they do, so...yay. ^^ This means you could potentially have three Flaming Scepter Mages, two Lost Soldiers, Warmaster Casana, and two Ascalon Rangers fighting alongside you as NPCs...in addition to the Prince. A small travelling army. ^^

Furthermore, Hardmode can be made much easier by bringing spells that enhance the little army you can collect. I haven't gone through all the skills that target allies, but certain ones come to mind.

Should it be mentioned that Adelbern's Guard appears in the cut scene? Angmar nite

didnt know if i should incorperate this with the article or not...this assumes you already went through the mission the normal way and completed the bonus but died at the end of the mission...

Due to Prince Rurik's Leeroyish behavior towards the end of the mission, it will save a great deal of time if the party opens the lever at the beginning (in case Rurik gets your party in a position that results in a complete wipe). To successfully do this, a monk with Shield of Absorption will be needed for defense, and offense will primarily require AoE damage. Support builds such as any profession with a blinding skill and a Mesmer secondary using Epidemic to spread the blind will help reduce damage greatly.

To begin with, start out by killing the two Charr the way the mission is normally played, this will prevent the Charr boss from running away when the lever is used. After they are dead, come back to Nolani Academy and talk to all three Flaming Scepter Mages so they follow you. Activate the lever and run to the top right corner on the side Rurik is on. The Charr will come in and begin wandering around the middle area after finding no one to kill. Eventually a Charr will come within Rurik's aggro bubble and they both will start moving towards each other. The goal is to let Rurik tank while the monk uses Shield of Absorption and any powerful heal such as Zealous Benediction to keep him alive. Then let out all the AoE damage on the Charr to eliminate them completely. This can take several run throughs to perfect but will easily make up time lost if the party is wiped while trying to save Rin with Rurik.

After the cutscene with the Stormcaller your party will have some time before Rurik starts taking lead. Rurik does not pay attention to how much he aggros and may end up aggroing multiple groups. To prevent this, immediately set out to destroy some of the patrols before Rurik begins to move away from the Stormcaller. Hopefully you will have eliminated any groups that he might aggro. If not, retreat so you lose all aggro and let Rurik take the aggro. Again, you will be using Rurik as a tank while casting Shield of Absorption on him. If party members die to any aggro that Rurik did not take, it is still possible to save the party from the situation if the monk is still alive and has a reusable ressurection skill, such as Rebirth. The monk can recast Shield of Absorption as soon as it recharges and use a strong heal to get Rurik's health up while using a ressurection skill. Rurik should be able to survive while performing this. It is also strongly advised if the monk is using Rebirth that an energy denial weapon set is used so that they can switch back to a normal energy set after using Rebirth.

additionally, i offer the builds i used to complete the mission/bonus on hard mode with my monk and heroes. this probably wouldnt work with a henchmen monk. sorry i dont have templates (not gw comp)

summary of the team build is, monk heals (duh), necro echo ss's and weakens a foe, which will also be the same foe that is targeted by Ineptitude, and is then the target of epidemic. this combination weakens and blinds all nearby foes minimizing damage while they kill themselves and the SF ele nukes away.

Enfeeble is a big no no. Enfeebling Blood is a million times better, especially with all the huge mobs. Reckless Haste is abit useless in HM since they already have an increased attack speed. I also used Power Return as a cheap spammable interrupt. Necrosis is good on any party member(except the monk of course). P A R A S I T I C 13:19, 19 July 2007 (CDT)

Or you can run sabway and run by the easier route...

Prince Rurik may have offended King Adelbern by calling him a fool, but Adelbern can walk the walk too. Here he is yawning during the cutscene, saying, "I will never allow Ascalons to live in the shadow of the Krytans!" 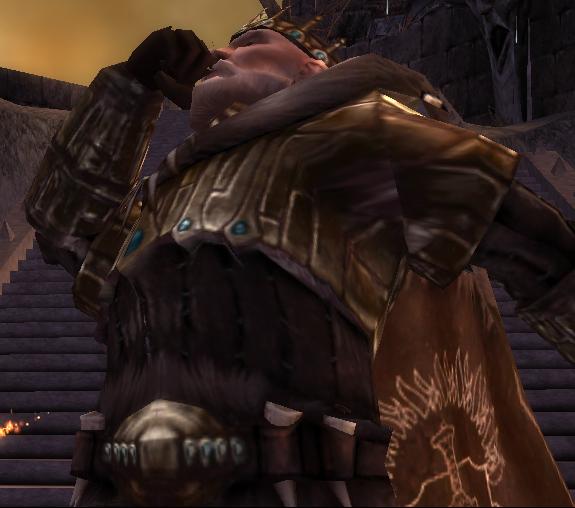 Urgh, damnit...I missed another good example. Was watching the cutscene recently and Rurik did /bored while saying, "People of Rin! Your king will lead you to death!" It would have made for a great screenshot. "Sass_of_Rurik.jpg"...

Warning: The following text contains spoilers relating to the plot of factions and nightfall.

I just think it is always funny when your ranger henchmen or human ranger enemies just break out dancing out of no where when not in a fight. Justing6 01:56, 25 February 2008 (UTC)

For those interested, there is a short narrative of this mission (at least the beginning half of it -- up to the point where all the Charrs outside the academy are slain and when you rejoin Prince Rurik) in the Prophecies Manuscripts (users guide that came with the game) starring our own fantastic 4: Devona, Cynn, Aidan, and Mhenlo.

The reason the tree out front looks like a Burning Titan is because it is not in fact a tree, it is one of the charr religous structures. The Charr worship the titans as there gods, so of course it would look like a Burning Titan!--Gigathrash 17:05, 3 July 2007 (CDT)

You're right, that is a stupid note. Removed. —Dr Ishmael

I thought it looked a little like the great Destroyer from EOTN.

Is there any way I could get a run to here from lion's arch? Or some combination of places, example Lions arch-beacons perch-Droknar's forge. Thank you. Justing6 01:36, 24 February 2008 (UTC)

I'm not sure why this is here, but anyway, elite tomes as drops are very rare. In all the missions it took me to get 10 characters each the Guardian of Tyria title (so 250 missions/bonuses, counted with multiplicity, plus failed attempts), I got a grand total of 3 elite tomes. Quizzical 18:54, 15 May 2008 (UTC)

The reason sin tomes are so low is because of Tahkayun Tsi, I presume. Even easier than the Scar Eater and Sessk, Woe Spreader. --Shadowcrest 23:04, 15 May 2008 (UTC)

That logic doesn't make any sense to me, since the elite tome drops have nothing to do with the profession of bosses. I suggest sin tomes are cheap, because capping sin elite skills the regular way is not so difficult compared to some of the other professions.Bikeboy854 23:47, 20 August 2009 (UTC)

A creature can only drop a tome of its primary profession. Raptor farming is one of the easiest, fastest, and well known solo farms out there. It takes two minutes to kill ~30ish normal enemies and one boss, all assassins. It is also just as easy, if not easier, to farm them in hard mode as it is in normal mode. Raptors are pretty much the sole reason assassin tomes are so cheap. --Macros 03:57, 21 August 2009 (UTC)

To clarify the easy alternative way to do hard mode with heroes, you go right after Cutscene 1, and keep to the right (west edge); go as quickly as you can without leaving your heroes behind because time is short. This area is empty, and if you keep going to the right, you won't have to fight anything at all until you find two Charr fighting something at the base of a long staircase going up to the right. Kill them quickly, go up the staircase and find Bonfaaz Burntfur. Kill him as quickly as you possibly can (Pain Inverter helps a lot), and you will skip the second cutscene and go directly to the mission win cutscene, skipping the whole Rurick charging down the hill to his death nonsense. But if you take too long, after a certain amount of time (I didn't measure it) the second cutscene will play and you will have to deal with Rurick's charge. I did this playing a Dragonslash Godmode warrior (OQASEZKTXFGW8VLOxkieBFyl), with a N/Mo Lost Souls WoH Hybrid (OANDYYzvOVVNSAZjUPurTfZC), a N/Mo ER MM Bomber (OANDUsleSVBoBuEUfzD4VJgmRA) and a R/Rt Barrage Weaponeer (OggkchZcoIqziBjtxeMqmrdxJ5C). --evilsofa 08:02, 29 June 2009 (UTC)

Or you could have a half decent back line with prot spirit and soa to stop Captain Suicide from dieing.--Łô√ë

It's not just keeping Rurik alive that is the problem. It also helps to keep your party alive. Unless you think you can spam casts on Rurik without ever aggroing any mobs. Quizzical 21:18, 29 June 2009 (UTC)

I tried the alternative method in HM and as soon as I aggroed Bonzarr Burntfire, a new cut scene started and put us with Rurik at the horn. I subsequently failed as Rurik ran willy-nilly to his death, before I could react. The second time I cleared out the whole area then went for Burntfire. I'll update the article to reflect this change when I get a chance Bikeboy854 23:34, 20 August 2009 (UTC)

That's not a new cutscene. It normally plays when you get to area to use Stormcaller. Maybe you didn't get Rurik far enough off radar, fast enough? Quizzical 23:43, 20 August 2009 (UTC)