It's quite possible that the special enchantments can trigger on any level; they will be moved out of the table if that is true.

Anyway, I did not succeed to gather more thant 140 points at once, so farmers must first kill as many creatures they can, and then to talk with the Norns. Aerial Starlight 12:50, 25 August 2007 (CDT)

Has anyone gotten a Rank Increase without killing a boss??? Each time I got the rank increase, i noticed it was the first multiple of 25 after I killed a boss and talked to a norn/asura. Might be u get a rank increase at certain kills, assuming you have killed a boss or something. Luminarus 05:49, 1 September 2007 (CDT)

Well, 300 is not the max for getting level 2 hunting party. I cleared all of Varajar Fells (except 2 popups that I found going to NPCs). 415 kills, this was the 2nd NPC that I talked to, who gave me lvl 2 HP. I started at Olafstead and went south, then worked counter clockwise (undead boss was my first boss, I think <100 kills.. can run again to test). x25 rewards were mostly boss hunts and rampages (1x2 pts per kill WOOT!). Pretty frustrating for a casual gamer trying to get armor. End result was about 3k norn rep. Previous run resulted in 4.8k with lvl 4 HP at 100 kills. Rampage blessing means a lot more with lvl 4. As the screen says, I am truly a mighty warrior! lol 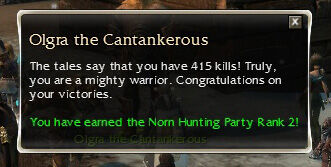 No one said it?[edit source]

So this means it's better to kill everything in the map except bosses and then bosses ? Kinda the contrary of boss farming... --PatRedway 19:41, 13 October 2007 (UTC)

Is it possible that the ranks are gained through your current norn title track rank. While I was out doing HM vanquishing, my party (all high ranked norn titles) were already at level 4, whereas I (rank 1 norn title) was still only at rank 2 Hunting Party? I have no screenshots to prove this, but it seems like a reasonable theory for gaining hunting party ranks. Ipo 00:11, 13 April 2008 (UTC)

The chat window count read, "400 enemies slain. You have earned the Time Attack!" I killed a few Berserkers and glanced at the Vanquishing Counter - it read 421. When the chat window stated, "410 enemies slain. You gain +300 reputation points for successfully completing the time attack." The Vanquishing Counter read 429. Earlier I had watched a few Wendigos fight a pack of Frozen Elementals and enjoyed watching the VC go up. I am guessing that the bonuses are earned only for the mobs your groups kills, not the number that die due to other mobs. Separ 22:46, 22 June 2008 (UTC)

I was also dead while the Hench/Heros killed a some of the Skeleton circle in the SW of Varajar Fells, that may have also contributed to the count discrepancy since only saw 9 mobs kill each other (there may have been more I did not see). Separ 22:58, 22 June 2008 (UTC)