I want this more than any other skin in the entire game.

Guru says it drops from the FoW end chest. This has been supposedly confirmed. All I know is, I'll be doing FoW clears all weekend to get one!

Imo they're coolest weapons in game atm. Just looking at all those pretty 'flower wands', Dragonic Shield and Demonic Aegis, that bow... they're really nice all of them. Beats Gavel of the Nephilim only because it's being held of wrong spots instead of it's handles. -,- (but it's still best DaW hammer) Not very suprising that it was done by Anthony Lopes who also illustrated Celestial Compass. My favorite equips. J Striker 12:02, 7 March 2008 (UTC)

How do you know that?

Well, it says on DaW contest pages on official Guild Wars page that Gave of the Nephilim was designed by Lopes... so was Celestial Compass, if you go look for it from the page. Cba to put links here, soz. <_< J Striker 12:40, 7 March 2008 (UTC)

Thanks to MINI HELL KITE... here is a pic for all the non believers... 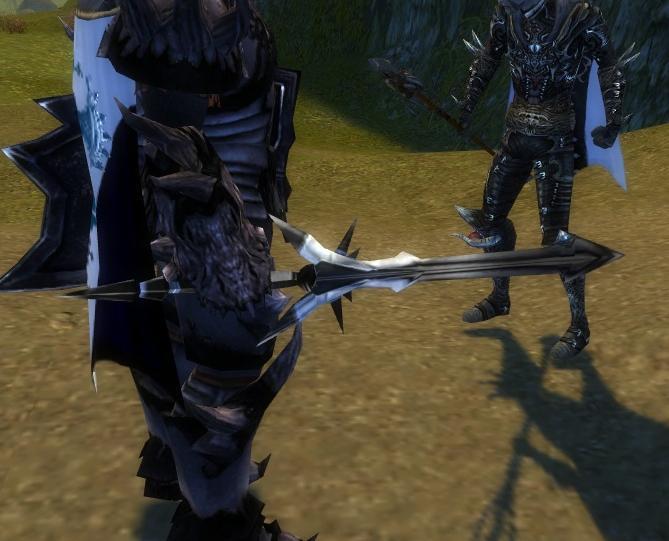 No one thought it was a hoax anyway. Thanks for the screen though.

check guru threads.. no one believes it

Well they are nubs and we believe you.

Should this image be removed as the skin seems to have been altered in dimensions since...? (To not mislead those who haven't seen it before)Andurael 20:42, 14 May 2008 (UTC)

Zomghaxx Granite Slabs! I hate you!

It's actually called "Obsidian Edge" in the game, maybe this article needs to be changed? American Wrath 12:39, 7 March 2008 (UTC)

We were uncertain about that earlier. Since you or your guildmate or something actually has one, I'll take your word for it.

I only read A Game of Thrones, sorry. D:

Only if it does double damage against undead.

Does this look really small to anyone else? And with that shape I would almost think it a focus at first glance.--

Actually, it was supposedly enlarged by the update on Sunday. An anon added that to the article, but it was badly spelled and formatted so someone decided to delete it, rather than fix it up.

So does black dye make the entire thing uniform in colour? Would someone mind posting a colour dye chart please.--— Hyprodimus Prime

Ok, but call me crazy but isnt this one on GWW gold?

Just a matter of lighting. A Crystalline looks way different in the Desolation than in LA or the Isle. ---

Hey. This sword is ABSOLUTELY 2D! It is not 3D, AT ALL! On the side view of the sword, it LOOKS like there are large spikes coming out. However, when the camera looks at the sword straight-on, all there is, is a thin piece of black/white paper. It's literally thinner than a sheet of paper. WTF! Is this a bug? Why would an extremely rare and expensive sword be 2D? Clearly it's not like this sword can be de-bugged, because swords like the Fiery Dragon Sword are 3D... Anyway, hopefully they fix this 'bug' soon. If it isn't a bug, then this sword is seriously CRAP. It LOOKS good from the side, but it seems like the person is wielding a piece of paper :(

Lots of high-end weapons have this problem. Back when ele swords were hot, nobody cared about their dimensions. Chaos axes are also very thin yet still sought after. There are plenty others, this sword is by no means unique in this aspect. I have one and still enjoy it highly despite it's Paper Mario design.American Wrath 07:47, 16 March 2008 (UTC)

Despite the ranting regarding the subject, its a particularly useful piece of information for those interested in it. --SLeeVe 22:38, 17 March 2008 (UTC)

I'd like to ask, do you know if the Emerald Blade is the same?

I heard that a r13 casters costs only 100k+15e. Dunno if it's true(too good to be true imo).TheDarkOath

Something weird has happened with this talkpage (the navbar on the other side and stuff), I'll try to fix it but I'd like some help here. Dragnmn talk cont 14:45, 1 April 2008 (UTC)

Need a screen confirmation that this item drops in the RoT. I have never heard of this happening and this item has been around for a few weeks now.American Wrath 21:54, 9 April 2008 (UTC)

Did a salve run the other day and someone (who i culd visibly see wielding an obsidian edge) said they got their sword from there. Whether they meant Salve specifically or Slaver's Exile in general i do not know. Andurael 20:44, 5 May 2008 (UTC)

I agree, the obsidian trivia is fine on the obsidian shard page, but its definately not needed here Negative Zero 03:05, 27 July 2008 (UTC)

Are you absolutely sure this item drops from the UW end chest? According to another source it's from the FoW chest or the Zaishen chest only.

ZChest drops nigh anything, thus we don't list it. Noone is certain about the UW chest, really. BTW, other source = Obsidian Edge, much? ---