This bugs occaisionally and gives like 4 or 6 energy, no idea what triggers it Skuld 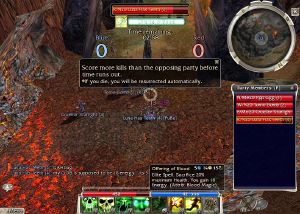 Do we really need the related skills here? It seems like the intent of the author is to list other skills that can be used to gain power. However, if this is the case there are many more skills that belong here. If anything, it would probably be more useful to link the "sacrifice" article here and maybe a second article discussing energy aquisition/maintenance/destruction. Otherwise, listing every energy maintenace spell at the end of every energy maintance spell lends itself to a lot of duplication. --Squeg 07:11, 11 Oct 2005 (EST)

That is a general problem with *all* related skills sections. What is related and why is very subjective. For example I would only list Blood is Power there. Others maybe Peace and Harmony. Apart from some obivous cases (2 skills doing close to exaclty the same), most of the related skills are not useful, imo. --Xeeron 07:34, 11 Oct 2005 (EST)

I personally believe that with the addition of "Related Skills" into most effects and conditions, the related skills section in the skill pages themselves should either be replaced with a note e.g. "for related skills see: Hex" or with a list of skills of the same profession that do the same thing. Period. --Karlos 17:49, 11 Oct 2005 (EST)

You are correct. :) Luigi

Is the animation for OOB always a super-sped-up version of a 1-sec spell animation? It looks immensely weird on my ranger, like a jerky convulsion or seizure! — HarshLanguage

What exactly was nerfed? The amount you sacrifice, or net Energy gain?

Where is the easiest place to cap? If your characters is from NF or Factions.

the Anet online store, as you must have prophecies to use this skill. --Honorable Sarah

I meant capture it, like where in tyria should i go? My char that needs is at Sanctum Cay, off course all got LA

With its new energy cost, giving extremely useful energy when you need it since hardly ever do you lack 1 energy, anyone think it'll be splashed into more builds now or is the health sacrifice still too harsh? Personaly I think it will be used much more. Zulu Inuoe 20:42, 6 February 2008 (UTC)

So what, now they'll die a few seconds slower in PvP? Really, outside of random PvE (where energy is hardly a problem), Touch Rangers are useless, and have been for quite some time. Changing one skill they use isn't going to change that. --Curse You

Eh, I still remember one time I screwed a toucher over because he couldn't even get that 5 energy he needed. I managed to e-deny him primarily with Ether Feast --Gimmethegepgun 04:01, 7 February 2008 (UTC)

I always screw them over by just crippling them. If they can't touch anyone, they die real fast. --Curse You

I just kill touchers by interrupting their skills and burning arrowing them to death.

well ok on the ways you kill touchers but if it happens not to have those skills you say you ll have a problem personally i get to aspenwood with toucher and i kick their butts-sorry for the unsigned comment but my account somehow got deleted-wormtongue gr Boonprots probably won't come back. There are much better kinds of monks to use now and if they did come back....this skill wouldn't last long against the nerf hammer. Mr IP 03:59, 7 February 2008 (UTC)

This may be my ignorance, but wouldn't this new buff make it have the lowest base energy cost of any skill in the game? (excluding skills that require no energy, of course)

Well, I play a toucher, sometimes, and when i think about it, you can use it more of the time because usually when I play in Aspenwood I always get into this situation "O CRAP! I FORGOT TO USE OFFERING...NOW IM AT 0 ENERGY" and because of the 1 energy cost it might actually save you to fight another day :D so it is actually a buff to alot of touchers ^_^