Maybe, if so, it would cast doubt on the theory that Altrumm was built by the Asura. -- Gordon Ecker 22:58, 17 July 2007 (CDT)
I like the deldrimor dwarves, so im happy to get him as monk hero^^ and don't worry, nearly every dwarf has a weird name in guild wars :D --

That could change, we don't know that there won't be any golem heroes, we only know that there's exactly one Asura hero, one Charr and one Norn hero, and that at least one of the heroes is a dwarf Dwarf, the other six heroes could all be golems, as could the henchmen. Still, not being able to heal non-stone party members is a big drawback :D. -- Gordon Ecker 21:11, 21 July 2007 (CDT)

I've got a Paragon with a Candy Cane Spear and Peppermint Shield, and I've found that to be pretty effective. /dance FTW. --

Churrta > All other bosses. You just can't beat a 60 foot walking rock, 'specially when you got a 3 foot midget to heal him. That's it! i'm gonna add a Churrta userbox to my page.--DNA

Only too true. Seriously, when shouting his name gives everyone such a good bonus, he gets a vote for being cool like that. --Kale Ironfist 03:19, 30 July 2007 (CDT)

Unless it gives us 51% move speed bonus, recharge and cost 51% less, and remove all hexes then Kilroy will beat him. This is made better due to the fact that Kilroy enjoys Leeroying everything and still lives. --Blue.rellik 07:19, 30 July 2007 (CDT)

Churrta would murderlate a frost wurm, he'd just yank the wurm out of the ground and play skip rope with it. Also, judging by pictures and relative size to players who are nearby the two, Churrta is bigger--Darksyde Never Again 00:58, 6 August 2007 (CDT)

Hah, im so using this guy when GW:EN comes out. —The preceding unsigned comment was added by Streetp (contribs) .

Churrta would still kick Maw's ass, He'd give Maw indigestion! Srsly, have you ever tried digesting a rock?

I lol'd. Though personally I still fail to understand what's so cool about Churrta...And, because of HAXXOR BOSS POWARZ DUBBLE DAMAGE, in a real fight, Churrta would kick Maw's ass. Sad but true ;_;

Double damage is useless against a wurm. You know the creatures with ten gajillion armour? Those creatures with like haxor amounts of life and knockdown each time they pop up? When I've foguth Maw (and I've fought him lots of time), he has the nasty habit of ducking in and out of the ground quite often to knockdown my party. He'll be able to knockdown Churrta at least once and can get life back with FoC. Maw wins --Blue.rellik 23:20, 23 August 2007 (CDT)

Uh that's strange, I remember when I hit Maw I consistently did below ten damage (and this is with 16 axe mastery). And Double damage doesn't give you life back nor does it stop you getting knocked down occasionally --Blue.rellik 06:26, 24 August 2007 (CDT)

Churrta's a shambling mesa...I believe they're immune to KD. And my ranger was consistently hiting Maw for more than 10 damage with only 15 marksmanship. Churrta would own Maw. DKS01 00:26, 27 August 2007 (CDT)

Read the Churrata page, he is suspectible to most (if not all) conditions and can be knocked down. I would suspect that he still has more life and armour though --Blue.rellik 01:56, 27 August 2007 (CDT)

well maybe because GW:EN is made for the maximum lvls? ----InfestedHydralisk

(edit conflict with IH) Like Infested said, Everything in EotN is supposedly geared towards level-20 players only; I highly doubt any Heros you gain will be less then level 20 when you get them. But yes, so far, no level data has been confirmed, so anything listed is unofficial as of yet. --

Ogden is also the name of an NPC in the original Diablo game by Blizzard which at the time, to my understanding, was comprised of some of the same personnel as the current ArenaNet staff. Possible nod or link, as far as the name goes. --Ninjatek 23:36, 21 July 2007 (CDT)

There might be someone working at Anet who also worked on Diablo, like there were some of StarCraft working on Brood Wars at GoA ----InfestedHydralisk

Ogden was also the town healer. There is no way to argue that it isn't intentional, with the myriad of things already lifted from every facet of pop culture. One begins to wonder where the line between hommage and complete lack of creativity gets drawn. Also, on that note, is Disney upset that the ANet people put Stitch from Lilo and Stitch in this game without their consent? Asura are the stupidest thing to happen to this game, in a game plagued with things like "Don't call it a comeback!" and "Can't touch this!" —The preceding unsigned comment was added by Foo punk (contribs) .

That's how all Heros come. You're supposed to provide the rest for him, they just do you a favor if you didn't have any Monk skills by giving you a working skillbar to start with. Just like when you make a new PvP character, and they give you six skills (five if you don't count the resurrection signet). --

I thought Kahmu and Xandra came with their respective Elites (Avatar of Balthazar and Destructive was Glaive)?

Nope, not in the full release either. Heros never come with their own Elite skills, sadly. --

"How do you know you haven't met a female dwarf. Eh? Eh?"[edit source]

Does anyone else find this quote...disturbing? o_O

Next time you see a Dwarf without a beard, keep this quote in mind. --

Ogden is a girl! Hahahaha!!

Either photoshopped or a quick fix, he says himself.

Shut it, you know what I mean. Or maybe he refers to himself as your character's gender? (I doubt it) 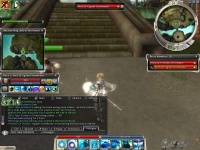 Then I suppose it reflects the user's character's gender.

SHADOW! Fuzz out the names in chat!

LOL that is pretty amusing. --

You should probably tell them what really happens... but wheres the fun in that?

Got to love Anet I suppose. Details? Who needs 'em!

While me and a couple of friends went into snake dance to go cap earthshaker, we all got mobbed by a bunch of trolls and all of us but Ogden died. My friend that was controlling him made him run away, yet all the trolls kept following him. Eventually we just said to let him die so we can respawn, so he clicked the cancel orders button for ogden and POOF! He teleported all the way back to our dead bodies and began rezzing. We were all so shocked that we decided to try it again! So we all died at the same mob of trolls and allowed Ogden to run away...sure enough he did it again, and again. No, he was not part assassin and using some sort of aura trick, just pure monk with no secondary. Anyone else have a mystical Ogden? --Aoshi

The answer is quite simple. Obviously he used some random Dwarven tunnel or a (probably stolen) Asuran portal to get back! Duh. --Gimmethegepgun 20:56, 28 October 2007 (UTC)

This is the same magic teleporting henchmen bug experienced in Talk:Dunes of Despair (mission)

I tested it, was surprised no one else did already, or at least wrote it down here. Vekk, Jora and Ogden dont get affected by my disease. Strike When Ready 23:04, 27 February 2008 (UTC)

Pyre is also unaffected by human disease, they simply aren't human, easy enough, I'll try to find a way to test the disease effect on him tho Malice 16:33, 9 April 2008 (UTC)

Ogden has blades on the tips of his shoes.[edit source]

Why is that considered trivia? Silver Sunlight

Because it's trivial? >.> Honestly, it doesn't really qualify as a full Note, and not everything in the Trivia section has to be a reference. —Dr Ishmael

I thought it worth mentioning because it seemed like a graphics error on the front of the shoes before I actually zoomed in and checked. --◄mendel► 15:13, 10 September 2008 (UTC)

Hmm, I always figured they were just iron noses. Blades? Wow, he's quite the Ninja :P ---

Well, they're quite pointy - I certainly wouldn't want Ogden to kick me in the private parts with those. Would you rather call them spikes? or spear heads? --◄mendel► 17:22, 10 September 2008 (UTC)

Spikes might make more sense, since I could see them being useful in mining/digging. —Dr Ishmael

Shoeblades...clearly, Ogden is really the leader of the Deldrimor Mafia. And you wonder why he chooses not to undergo the Rite of the Great Dwarf Transformation. The Godfather Never Dies.

Not worth noting, although it is unusual to see it on a dwarf. They are separate things from the shoe that exist in real life and are used to gain traction on a cliff face or icy slope. It is usually an iron frame that is fastened onto the shoe. I'll post again when I figure out the name and can at least link to a picture or something for it, but I think it should be removed. — Powersurge360 06:47, 11 September 2008 (UTC)