Karlos: Originally I had the map at the very top (like you), but I moved it below the description because I found that way it doesn't "clash" with the description and leads to lots of line-breaks, especially for people who use low res 1024x768. It's a matter of taste. --Tetris L 18:38, 10 Oct 2005 (EST)

Not for me. If you put the map INSIDE a section, then if that section is too short, the picture will PUSH the next section down until it ends. i.e. you'll have a nice big gap between sections. So, as a rule, I always place maps and other pictures above all sections so that they stack nicely next to the sections without giving the sections awkward gaps. In this specific page, the first section is big enough that it is not a problem. But in general, I would put it above all sections. It is not a matter of taste, but a matter of usability. --Karlos 18:56, 10 Oct 2005 (EST)

As for the green numbers: Green was an obvious choice for the NPC number because that's the color that is used in the game. I made the green slightly darker so that you can read it on white background. But on second thought, I think we might just add one general note on top of the NPC and boss section, and then leave the numbers without any color. Makes the code much more simple and the page easier to read. --Tetris L 18:38, 10 Oct 2005 (EST)

I think you missed the joke. I was referring to the famous novel "Green Numbers" by Ollj. :) As a side note, the Green numbers do show up green in IE, but they are too bright and barely legible. Can you make them a darker shade of green? --Karlos 18:56, 10 Oct 2005 (EST)

I think you should keep the numbers to the right of the name, not the left. They LOOK like they are just a numbered list until you know that this is what you are looking for. At least that's what I thought. --Karlos 19:16, 10 Oct 2005 (EST)

I removed the color from the numbers and left it only in the note. Makes life easier. I can also make the green a bit darker. As for the position (left or right of the text), I prefer them to the left. The note on top should be pretty clear. But this is not an issue that's worth starting yet another one of our endless discussions. I'll surrender and put them back to the right. --Tetris L 19:21, 10 Oct 2005 (EST)

Suggesting a number of changes:
I'll change this for Old Ascalon as a testing ground. Once we've agreed on the format, I'll transfer the format to other explorable areas as I work through them. --Tetris L 19:37, 15 Oct 2005 (EST)

OK, who just turned all the numbers of enemies/bosses in the article to blue? This is completely pointless, since they're all red in the map. I will assume this is just someone having a laugh, so I'm changing them back. Astralphoenix123 23:30, 24 January 2008 (UTC)

That was me, they are painful to look at. The red and green isn't too bad, but we don't need color coded PAIN on a map you can hardly see...

I'm not sure if we want to add these to the list of NPCs, but when you are new to post-searing Prince Rurik can be found in the Krytan Camp talking with Ambassador Zain (during the quest The King's Message) and later (after I delivered the supplies for the orphans to Elie Rigby in Helping the People of Ascalon and was returning to Zain for my reward) I saw Rurik and the King arguing just down the hill from Jarel the Tamer. The king was guarded by a Royal Guard (I think that was the NPCs name, not 100% sure, it was a Royal something). --Rainith 02:45, 14 November 2005 (UTC)

I cleanse Ald Ascalon and killed 270 foes. We must gather this info, cause I was getting crazy searching for pop-ups. I'd put this into the page itself but I don't know if there's already a template for this kind of thing. --disarm 03:01, 20 April 2007 (CDT)

Are the stats on hard mode goiung to be added to areas? I just finsihed Old Ascalon and there are 267 foes. I can upload a pic if needed. Not sure how the formatting will be so I dont want to do anything tho the page. Guess I should move this down here, forgot to make a heading. A different ammount can spawn then since I got it at 267 and you at 270. Suppose I should sign too. Been awhile since I used the wiki, been waiting so long for hard mode. 24.118.239.132 03:09, 20 April 2007 (CDT)

Total count 253 with animals, we killed for, appears to be random 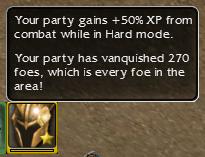 do you have to kill everything in hard mode? because when i look at the map of the fully vanquished old ascalon i see that he/she missed a cave area were i found 16 or 17 devourers!

I vanquished this area with 184 foes killed by avoiding the NW area as advised. I think I'll take the liberty of updating the minimum numbers here and in the Vanquisher page. I can supply a screenshot if desired.

Why is this location called OLD ascalon?? It's NEWER than pre-searing both in game, and in the order you play, therefore it's not old. Old is an ambiguous name, I don't understand why anyone's used it. It should be called ruined Ascalon or post-searing Ascalon.--Xapti 16:10, 1 May 2007 (CDT)

Go bitch to Anet, we just use the name that the game uses d-: -User:PanSola (talk to the

I was Vanquishing Old Ascalon yesterday, and as I got to the exit to Regent Valley, there were three NPC's there. One was Guard Captain something, and the other two were Ascalon guards. They were all warriors and started following me after I approached them. They were really helpful, too.

I don't recall the name of the captain, but I can check later if it's needed. I think it would be useful information to be added to the Hard Mode section of the article, as many can't get by in a 4-man party, or don't have heroes.

The only Prophecies quests I have active are "Last Day Dawns" and "To Sorrow's Furnace" so they couldn't be there are part of a quest. I did all the quests I could find in Old Ascalon a way back, so they shouldn't be there as part of an unfinished quest.

At one point, the Captain says (text appearing above his head, not in the chat box) "Lets go boys, King [name] awaits" I don't recall the name of the king -.- Wasn't Adelbern, though.

I saw them too. It was Sergeant Clark and 3 Ascalon guards. They're part of the quest Military Matters. The requirements for this quest are (1) Prophecies character and (2) Warrior profession, but I was an A/Me from Cantha, so my guess is that they always spawn if the quest is not completed -- and obviously you can't complete a quest you can't take. They were quite helpful, I wish I'd found them earlier (I was cycling around the map counterclockwise). -- bcstingg (talk • contribs) 19:15, 2 October 2007 (UTC)

I also encountered them with a R from Prophecies and as Military Matters is a skill quest which opens up, I'm pretty sure I completed it with /W as secondary profession. I'm not 100% sure on this though. These extra warriors can be extremely helpful to take down the group of the monk boss Mono Ookook and his grawl and grawl ulodyte. Karya Foxstep, 15:47, 20 February 2008 (CET)

Those colorful numbers actively cause me PAIN when looking at this page. Do they really have ANY good reason to be there?

This one, I disagree with. Imo, it's note-worthy that you can sell your excess loot to him. ---

Is the the only guy in the explorable area you can do that with? And yeah, with a premium on storage, being able to sell on the fly seems like a nice thing. But since he's listed as an NPC already, it might be redundant. --JonTheMon 19:31, 3 February 2009 (UTC)

How so? That would mean you don't list the foe's levels, because they're on the respective Monster's pages anyhow. ---

Yeah but bro are you going to sell your Celestial to him? I don't think so bro. You might sell some tanned hide but stuff like that isn't even really worth anything anyway and it isn't worth even carrying bro. Why bother listing it as an option? Are you gunna go and put it on every single page with an artisan man? It seems like a lot of work bro. No distinguishing features 19:36, 3 February 2009 (UTC)

Who the fuck said to sell Celestial crap to him?
Also, there's plenty people that just pick up everything for 'max profit', and if they can get a few hundred more because they can sell during the vanq, it's worth it. For them. And they might not know the artisan buys their shit. I wouldn't be against adding it to every Artisan it applies to, actually. Well, either that or to the Artisan page itself. ---

Put it on the artisan page bro. I think when you're vanquishing you'd see the artisan bro and then if you were a scrub who didn't know what it was you could like, go look it up and then be all "woah! I can sell my shit to this dude" if that makes sense bro. No distinguishing features 19:42, 3 February 2009 (UTC)

I also agree that the note should stay. Old Ascalon is common area that people end up caravan vanquishing to, and it's not common to come across such an NPC during such an arduous and storage-consuming task like CV. King Neoterikos 21:43, 3 February 2009 (UTC)

The fact that one can sell shit to the Eternal Forgemaster in FoW is very notable; it certainly has made me a lot of profit. By that rationale, the note should stay, and in fact any explorable area which has merchants/artisans/crafters can also have such notes.

Why put a Vanquisher Map on it? It's just an walked on map... Any one agains removing it than speak now. Or forever.. well you get the point --