Maybe teh pre-order manual said "Oni are demons of the Canthan continent" or something like that? dunno. -PanSola 16:29, 25 April 2006 (CDT)

The use of Demonic Agility is an indication, but far from a compelling proof, just like the use of Turtle Shell is no proof that Kappas are Turtles. I want proof with a weapon of Demonslaying! See Talk:Demon. -- 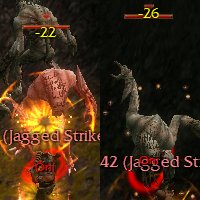 I don't see why it would, the oni don't serve abaddon --FireFox

I'm for splitting, following the Kappa example. Whether we use the level as suffix can be discussed. We might also use Oni (Standard) and Oni (Keen), considering the level 28 Oni drops Keen Oni Claws. --Tetris L

I fought a low-level Oni on Shing Jea Island. I have no idea where it came from or why (it spawned behind me, in area I'd already cleared) but I still have the collectable item it dropped. Any clues?

There are level 16 Onis on the eastern side of Shing Jea Island too. --Tetris L

KRK, you happen to know what type of Oni Claws they drop? --

Anyway ... I plan to split the article, next Monday as the earliest. Veto countdown started! --

As far as I know there are 2 types with the Oni name, unless the ones in The Deep are different as well, then that would make 3. Lesser Oni has its own name, so that is not a problem. Guess ANet got tired of creating new names for different level monsters, like Stone Summit Beastmaster and Stone Summit Herder. :P Go for it! --Gares Redstorm 09:36, 24 May 2006 (CDT)

The strange thing is that they came up with different names for the drops, but didn't bother to name the monster itself accordingly. --

I'm about to go ahead with splitting. Last chance for veto. --

I oppose the split, they are only two creatures, with the lower level one having skills that are a subset of the higher level one. Not worth the split. Keep the info here in one place. The lesser Oni and the Oni of the Deep have their own articles. --Karlos 16:31, 3 June 2006 (CDT)

In the past we have split them. See Grawl in reference to this.

Actually, the tradition is that we split when they are different monsters but with the same name (like Grawl level 4 and level 22, and like Minotaurs in the shiverpeaks and the desert). If the monster is the same at different levels with just an expanded skill set we keep it in the same page, like Stone Elemental. We don't ust split all the time. --Karlos 22:23, 3 June 2006 (CDT)

Get them to fight Hyrdas, and you will lose!!! fine, so hydras don't look much like the aliens -User:PanSola (talk to the

it's mentioned in the deep. the reason that the luxons want peeps to go down into the deep is to find the origin of the outcasts and oni, and destroy it. outcasts we know were driven cah-razy by kanaxai as they mined into the jade and oni were created.--Aptaleon Griefhaven, 11:50, 30 july

"Oni are curious creatures. We of the Turtle Clan believe they were once human but have become twisted by terrible nightmares from the deep within the Jade Sea. They are similar to the Luxons known as Outcasts, driven to the edge of insanity and irrationally violent. Oni may hold the key to discovering the true nature of the Outcasts."

whether they were once human or not, it's undeniable that kanaxai was the source/ origin of them. whoever removed it, don't w/o explanation plz. --User:Aptaleon Griefhaven

Definitely not, it's a Nightfall skill (so didn't exist prior to the release) and their elite has always been Shadow Shroud RossMM 10:14, 3 January 2007 (CST)

From what I've read Oni are related to the corruption of Kanaxai and the Outcasts, which seems distinct from Abaddon's influence. Perhaps they're a foreshadowing of EotN? RossMM 11:23, 20 June 2007 (CDT)

Don't lie Hogie, lightbringer does not work on Kanaxai and his Oni [both in the Deep and regular Oni spawns], lightbringer only works on demons in Nightfall and demons associated with Abaddon 172.203.248.95 19:30, 2 July 2007 (CDT)

Just a note... travelling from Zos Shivros Channel to the boss with Way of the Empty Palm (top right of Boreas explorable) one of the tameable crabs spawned a group of oni and was brutally murdered... but my point is it's not just humans that can spawn oni! Hunter Darkbow (ign)

You'll also see in zones such as Silent Surf that basically anything that is not aligned with the Oni will cause them to spawn. I've seen a battle in which oni, dragons, and outcasts were all fighting, usually just north of the bridge to Zenos. --Thervold 13:13, 3 July 2007 (CDT)