Thank Balthazar it's PvE only or else Frenzy-Healsig could be viable... *shudders*

Note that when the Hex wares off, or your target dies (and the hex goes off) you'll no longer have a way of redirecting damage. This skill has it's uses, but let's not get reckless... — Poki#3

Might be kinda useful with a fifty five in areas with enchantment removal, just to be safe. Would be really limited, though.

this skill is pretty usefull, it triggers AoE spells like ice spikes and deep freeze^^

If you imagine the Asura's eyes closed, it's like a frenzied singer, holding and singing into a rose held like a microphone. Weird, I know, but until your comment that's what I've seen :) --

the asura in the background sends a beam that makes the guy in the front yelling of pain, and that makes sense with the name.

I must be missing something, to me this looks like a Retribution style hex. I don't really see how it would be useful farming at all, unless you farmed with a build that had you taking large amounts of damage without reducing it. -Ezekiel 02:20, 31 August 2007 (CDT)

The farming comments above are based on pre-release information. Before it went live, this skill redirected all damage over 50 to the hexed foe, so frenzy + healsig with no armor could cause over a hundred damage to a monster for each medium-damage skill/attack by a monster. Now it is more like retribution and a lot less useful. Demonic Peaches 10:57, 1 September 2007 (CDT)

A lot less usefull for farming you mean, this dominates aoe using enemies. using it on molotov rocktail before his sieges wipes away 3/4th of his total health. (if he hits 8 people). it certainly has use, and it's a way to strike back at lame asses enemies who can insta wipe teams :P--Marth Reynolds 09:41, 2 September 2007 (CDT)

Yes, a lot less useful for farming is what I meant, but I was also thinking generally, but you make a good point and I definitely see it as powerful, it's just that the duration is so bad. Demonic Peaches 22:33, 4 September 2007 (CDT)

As far as I know, you should still be able to use Shield of absorption well with it, and possibly some other skils, since skills like retribution have dealt back damage with shield of absorption up. Prot spirit DOES affect it though, of course. Even if it doesn't work, spirit bond is another method which would work decently.

I also have a question: What kind of damage does this trigger on? all real damage types; not lifesteal or loosing health I guess, right?

Triggers on all damage that can be traced to a cause of the dame, this includes DoTAoE, but not hex based things like SS. This skill also made a total mockery of the great destroyer. --Ckal Ktak 15:50, 6 September 2007 (CDT)

Need a good spell vs AoE ritualist, elementalist and (few) Warrior bosses? Pain Inverter on Mesmer with Mantra of Recovery or Signet of Illusions... One boss is usually dead in 3 seconds. — Abedeus

AoE bosses? How about going un-Infused versus Spectral Agony? That is a lot more fun! Too bad none of them drop greens... :( Also, wouldn't it be just awesome to use this against the Base Defender? :D

Heh, Base Defender is a single target spell, so he would only take 80 damage.

Targets to watch out for[edit source]

Usually Anet is pretty good at preventing cyclical damage loops, but I had the misfortune to try his spell on an enemy using Sliver Armor. The cloud of numbers coming off was a Thing of Ugly. The question I'd like an answer to is, do these two skills feeding each other? By the way, have some other sucker stand next to the ele you test it on ;D SarielV 06:05, 26 September 2007 (CDT)

That's odd, I wouldn't think sliver armor would trigger off this, the initial casting sure but after that it seems odd. I assumed it works like Backfire or SS (which I also thought would only trigger sliver on the initial casting) -Ezekiel 08:10, 26 September 2007 (CDT)

Pain inverter works on any damage done. its working as it should

Yes, but what I interpreted it as is that; They put Sliver armour on themself, you cast pain inverter on them (triggering sliver armour) sliver deals dmg (triggering inverter) which triggers sliver armour... I can see no reason why it would do this. But I would guess it doesn't anyway -Ezekiel 23:42, 26 September 2007 (CDT)

Sliver Armor triggers off everything, you were probably just seeing the numbers from everyone casting spells and attacking it. I can't see this spell feeding itself.

Sliver Armor should be triggered once when you cast Pain Inverter. Subsequent damages caused from Pain Inverter doesn't fit the trigger criteria ("whenever target of spell of attack"). In other words, while Pain Inverter can cause damage many times, you only cast it once, so it only triggers Sliver Armor once. -User:PanSola (talk to the

Recently in Duncan the Black dungeon i found cast pain invert on the restless dead as they used their touch skills, pain inverter didn't deal back any damage, it says you deal back 1xx% of the damage that foe deals, so why doesn't it deal back damage from touch skills?? Just wondering if anyone know why, or is this a sort of bug. -User:Dark Phi

This skill actually has a really cool-looking animation, but it occurs on the player and not the foe: 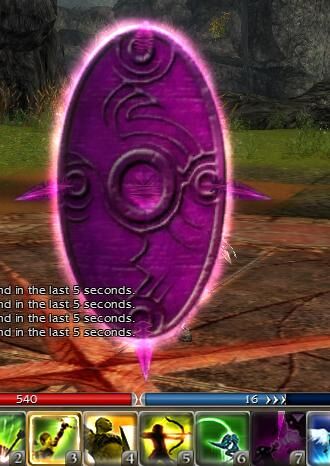 Just finished up Nightfall, and... Boy, Pain Inverter certainly helps an awful lot. Does 108% at Asura 5, but mostly hits the 80 cap every time.

Couple of things to try it on:

Torment Claw: A nuisance pretty much everywhere, but the big backrow killer in Abaddon's Gate. Struggled as a tank, since Kormir loved to body block me near the shackles, but once you throw up PI onto a Claw it practically kills itself. Rain of Terror, Scythe of Chaos: The former likes spamming Ice Spikes and Deep Freeze, the latter does dervish melee damage. Madness Titan: Loves to block, loves to dish out damage, can't take it once it's inverted back onto him. Curator Kali: Found in Gates of Madness, has a pretty nasty spike that's easy to interrupt but can still catch you out. Why bother? PI him and watch him eat away half his own life. Shiro Tagachi: Bring along a minion master, chip him down until he starts spamming Impossible Odds, the PI him. With a substantial minion shield, 30% health turns to 0% in no time at all. --Glommon 16:46, 16 November 2007 (UTC)

Good luck creating a substantial minion shield in an area with about 2 corpses.

I'd say since we are talking about the endgame of Nightfall there is quite a lot more then 2 corpses around. The test leading up to Shiro there makes for a pretty easy use of minion master, however they will all die at Shiro making the MM pretty useless afterwards. --Winterbay 09:17, 26 November 2007 (UTC)

Not really, I bought a minion bomber for HM and it made that area a complete breeze, one of the easiest fights ever. You do remember there are margonites around the shrines right? --Blue.rellik 09:54, 26 November 2007 (UTC)

Yep, used the Margonites in the shrines as corpses. It's a little harder to maintain a minion shield in that area, but still possible. Animate Bone Minions give you two cheap minions a pop, and even though Livia had left a significant stack of minions behind at a shrine to die at Shiro's hands while I moved on to the next (Another useful tactic for that bonus, it must be said) the Margonites at the last shrine gave me enough bodies to turn Impossible Odds into a suicide move for Shiro...

...That said, it also works for the final Factions encounter too. I ran it using the "Warrior/Necromancer Strategy" tactic on the page, (Six characters; five warriors, one monk) with Pain Inverter as an extra skill on the short SV/WB/Res/Celestial skillbar. Again, once he broke into Impossible Odds, he started dealing significant damage to himself, and killed him off with one final cast of Storm of Swords. Bam, one pwnd Shiro. --Glommon 15:01, 26 November 2007 (UTC)

According to skill description, now only affects attacks (I think there might have been a few undocumented skill changes with the concise description update). Sadly, now seems fairly useless.

That only what the concise decription says, it still works on non-attacks. --

LOL, this skill is and has been incredibly useful, nothing has been done to it that has substantially reduced its utility as one of the most powerful skills in the game. Non-caster (Warrior, Ranger) types may find its 10 energy expense make using it prohibitive, but that's about it. This, along with Ebon Vanguard Sniper Support (and Necrosis, if you are a primary/secondary Necro) are probably THE three skills to have in your skill bar. I use, where practicable, a Necro/Mesmer build which allows me to use Arcane Echo on EVSS, PI, or Mark of Pain, as seems appropriate to the mob I'm dealing with. AE EVSS when dealing with paired monks or a monk boss (kill 'em with a spike, when you get a headshot), AE PI when dealing with paired elementalists or any AoE boss (make them pay for that massive damage AoE attack), and AE MoP when dealing with an oversized mob that will get locked up around a minion-master's minions and/or a tank (expanding the damage done across the whole mobbed group). You will kick ass for the most part.--24.250.216.51 09:33, 6 February 2009 (UTC)

I had numbers fill the whole screen when he started attacking everything. Unfortunately he healed the 2-3k he took and wiped the party soon after--Relyk 03:32, 10 March 2009 (UTC)

Does it multiply the 80 cap like it does with LB rank?

Official Wiki says it does